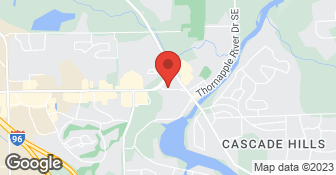 Control Electric, Inc. is a fully licensed and insured electrical contracting company located in Cascade Twp. Grand Rapids, Mi. We have been in business for over 25 years. Our mission is to provide a team of electrical contracting professionals dedicated to delivering the best possible service by using cost efficient planning and technical solutions, while never compromising quality workmanship or materials. Call today (616)956-7799 for a free no-obligation, competitive estimate....

Specializing in electrical services! We always guarantee your satisfaction and won’t leave until the job is done right. We take pride in ourselves and on the quality work we provide, while always delivering great customer service! Check out our services offered, then call --or-- click to schedule a free estimate today!  …

Loved working with Control Electric. They were professional, punctual and the result was high-quality.

Hi [Member Name Removed], Thank you for taking the time out of your day to give us a review. It was our pleasure working with you.
5.0

After installing a part it still would not work. Steve was very fair about pricing to replace my old generator. And the replacement went without a hitch. He even took care of calling a plumber to re-fit the gas line which was included in the price.

Description of Work
I called to have my generac generator repaired.

Thank you [Member Name Removed] for the kind review. It was our pleasure working with you.
5.0

I purchased the parts and the electrician installed everything. The electrician was prompt, professional and completed the work in a timely manner. I am very happy with the work and would recommend Control Electric to anyone who needs electrical work done. In fact, I have already given their number to a friend of mine who was looking for an electrician.

Thank you for taking the time out of your day to share your experience on Angie's List. We value your feedback and you as our customer.
5.0

I bought a whole house automatic generator from Costco. But when I got quotes from various so called reputable companies to do the installation I found that they had two installation prices. One price was for if I bought the generator from them and then a second, much more expensive price for installing a generator bought elsewhere. These other installers were very arrogant and aggressive. I contacted Steve, the owner of Control Electric and he quoted me a reasonable price, regardless of where I bought the generator from. The crew that installed the generator were very friendly and professional. They did an awesome job and cleaned up after themselves. Steve visited the job site to make sure that I was happy with the job his crew were doing. There were a number of warranty issues with the generator and Control Electric handled the problem and made sure that the manufacturer resolved the issues in a timely manner. I have had the generator for two years now and Control Electric comes and does the scheduled maintenance without me having to worry about it. One of the best companies I have had the pleasure of dealing with regarding my home. I highly recommend them.

Description of Work
Hookup of 17kw generator. Thereafter annual service and dealing with the manufacturer to resolve warranty issues

Thank you for taking the time out of your day to share your experience on Angie's List. We value your feedback and you as our customer.
5.0

Called this morning for an appointment. An electrician was at my door by noon. Electrician found hot to hot short in split circuit outlets. He fixed the problem Would definitely use this business again.

Description of Work
troubleshooting a circuit breaker that tripped and would spark when reset.

Contacted at the end of August for a generator estimate. Was told would receive within 10 days. We called again after 21/2 weeks and were told Steve was out of town and we should get an answer within a few days. Six weeks later,still no estimate and when we followed up, he just said he wasnt good at following through. Asked if We had gotten other estimates, then seemed surprised and offended that we did. Needless to say, we contracted with someone else.

It was a gift. They were professional. They cleaned up their mess, though there was hardly any. They did have to run the line through the house. Everything was done great. They were here and there were no problems with punctuality. They did a fabulous job and I didn’t have to sweat one thing or anything. They were in and out and it works great. We have never had a problem with it. I would recommend them to anybody.

Description of Work
We used them to have a generator installed.

I was having drywall replaced and decided at the last minute that we could use more lighting in that room. Control Electric was able to squeeze us in the following day so that we didn't hold up our drywaller. They were very professional and prompt. I can't remember the exact price, but it was very fair for the amount of work done and the cans provided. I will definitely hire them again for future projects.

Thank you for taking the time out of your day to share your experience on Angie's List. We value your feedback and you as our customer.