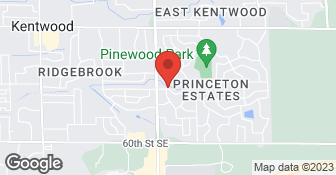 Cardinal Remodeling & Design is known for high quality products and services at very affordable prices. Customers love having one contractor for the complete home.

I worked with Lynn to fix a problem with our sliding glass door. Lynn was extremely knowledgeable, helpful, and patient. I really enjoyed working with him, and would highly recommend.

Description of Work
I had tile flooring installed in 2 rooms and a hallway. It is beautiful. I have had Cardinal Remodeling do several projects for me and have always been more than satisfied with their work.

He was able to find the correct parts and reinstall them properly. Unfortunately I do not recall the price but do know that it was reasonable. The installer was professional and helpful.

Description of Work
Completely remodeled main bathroom. Installed new whirlpool tub & surround; double vanity; faucets; lighting; cabinet; towel bars; stripped wallpaper; etc. they did a beautiful job. The only complaint I have is that it took longer than I was told it would, but they also ran into some unexpected problems, as often happens in older homes.

Cardinal was punctual, fast, and cleaned up after the job was done. Even though it was February and very cold, they were able to blow insulation into our attic without our house becoming cold. We had a subsequent 12% drop in our monthly budget plan for gas heating even though the winter was extraordinarily cold, and we have not yet required air conditioning this year even though we have had several hot days. Cardinal has also done other work for us, including installing vinyl siding, outside doors, and drain tiles. We have always found them friendly, cooperative, and professional. We are looking forward to working with them soon on remodeling our bathroom and some other house repairs. I would not hesitate to recommend them.

Description of Work
Put baffles in attic eave & blew in 14" of insulation to bring our 1970's house up to code.

Cardinal started the project on April 30, 2012. The project was estimated to take about 2 weeks to complete, but ended up taking about six weeks. There were two men that worked on the project, andthey did so with care. Although there were many days they did not show up, because of various problems, such as truck breaking down, conflict with another job, or lack of material. The material used was specally ordered and there was an issue where the men could not do any work because the material had not arrived. However, when they did od the work they did a good job, and we are very pleased with the overall outcome. I guess we would rather have it take as long as it did, so long as it was done right. We wished that the material was ordered properly, and that they were able to work continously. If one thing which was a problem was the lack of clear communications. It seems that the office manager and the workers in the field did not communicate clearly as to what and when things were going to happen. It would have made it much easier for us to know what to expect. However, when we did call, the manager always returned our calls as quickly as possible. There was an unexpected increase in the cost of the Deck project of about $2K, primiarily as a result of unanticipated problems with removing the old deck, which caused the cost to increase. Also, we had unanticipated cost attributed to installation of a hand rail which we thought was included in the original quote. The cost overrun, was explained and appeared to be somewhat reasonable, but it was a surprise none the less.

Description of Work
Cardinal replaced our outside Deck with removing the old wood deck and replacing with Azek Decking. Also replaced our wood railing with new Azek Railing and installed an underdeck water proof gutter system to utlize our patio under our deck during a rain. We had four companies quote for the job, Cardinal had the best price.

With over 30 years of electrical experience, we are here to address all your electrical needs. You'll be shocked how good we are.  …

Cardinal Remodeling & Design LLC is currently rated 4.8 overall out of 5.

No, Cardinal Remodeling & Design LLC does not offer a senior discount.