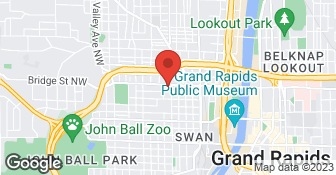 Bridge St. Electric is a fine quality lighting store located in the heart of Grand Rapids, Michigan and has been in the same location since 1929. We are known for our exceptional personal service, our tremendous selection of unique lamps, fixtures, lamp shades, wall artwork and mirrors! Our service deptment can fix, restore or modify any type of lamp or fixture! We also pride ourselves with our extensive selection of lamp parts light bulbs and glass globe replacements. Our ever changing antique showroom has everything from antique lamps and fixtures, to antique juke boxes, carousel horses, antique boat motors, pedal cars, there's always something different! You will find we are well worth the trip!...

I help people achieve the best interior design plan that works for your needs and function. Your budget and your style are my priorities.  …

Do you love a style that is Simple, Minimalistic, bohemian, Scandinavian, Urban Modern? Well you’ve come to the right place! Allow me to make your life at ease and stress free, based upon the feng shui of your living space!  …

Technician did everything requested in less than the stated two week period and called when it was done.

Description of Work
Rewired and repaired a lamp.

Description of Work
Rewired a floor lamp. It took longer than the two weeks they said it would. When I called to check on it, they couldn't find it. They said they would call later, but did not so I checked again a couple days later and it was done that time. Somewhat irritating, but they were courteous and I felt the price was reasonable.

THEY NEVER ANSWERED MY EMAIL!

Description of Work
NOTHING!

I found Bridge St Electric in Grand Rapids, MI on Angie's List and decided to give them a call. I was encouraged to bring the lamp in so they could see it and advise me further. Because of their friendly communication to me over the phone, I decided to do just that. When I got there I was greeted with a friendly smile and asked how they could help me. I told them I had called earlier and showed them my lamp. The person who helped me showed me a couple of options I could choose from to replace the glass shades. I decided on one of them and they then wrote up my repair order asking for a $20 deposit and then advised me that it would take a week for the repairs to be complete. I was also told before I left the store that he could see the bottom part of the pole that connects to the base needed tightening up as well. I did receive a call from them a week later saying my lamp was ready for pickup. I didn't get back to their store until 3 weeks from the time I had brought the lamp in for repair. When I got there to pick my lamp up, a female clerk located my lamp and brought it out to me. I was very pleased with the finished job and the glass shades I had chosen. I paid for my order and the same clerk carried the lamp out for me and placed it carefully in my car. I then left the store that day and returned home to set my lamp up again. When I got home, I noticed that there was a for sale tag on my lamp with a price of $195.95. I didn't think too much about it but thought that was strange, since it had only been 3 weeks since I brought my lamp in for repair. Before my writing up this review, I decided to call Bridge St Electric to give them a chance to explain why that sales tag had been placed on my lamp. The man I spoke to on the phone told me that he had no idea how that could have happened except for maybe a mistake made in the repair area by whomever was working back there. I told him that I was happy and pleased with the repair of my lamp and how nice it looked, but I just wanted to give them a chance to explain about that for sale tag that was hanging on it when I picked it up. He said they definitely would not have intentionally put a for sale tag on my lamp. However, what I did note in my conversation on the phone with him about this issue is that he really did not apologize for such an error being made, but just totally explained how they just didn't do that with repair orders unless it hadn't been picked up in at least a year's time. I accepted his explanation and ended our conversation on the phone with him. Overall, I was very happy and satisfied with the repair of my lamp and the professionalism of each employee who helped me. This for sale tag issue really is not something that would prevent me from returning to them for more service should the need arise again, but would strongly suggest that apologies are in order for such errors when they occur and are brought to their attention.

Description of Work
I have an electric floor lamp that was in need of repair because it had fallen over and the Torch glass shade plus the two smaller glass shades were broken. I was quoted a repair price of about $90.00. All three of the glass shades were replaced as well as the bottom of the pole connecting to the base was repaired with a bottom coupling making it very secure again. I paid a deposit of $20.00 and paid the balance in full when I picked my lamp up, which was another $81.87; that also included parts, labor, and tax.

I bought a pair of sconces at a flea market and brought them in for rewiring. They took a deposit and told me it would take a couple of weeks. They called when the work was finished.

Description of Work
This most recent experience was for rewiring a pair of sconces but I have used Bridge Street Electric many times for repairing and rewiring old light fixtures for old houses.

thanks member you have been a great customer

We offer personal assistance in choosing lighting for your home or office. If you are in need of a lamp shade, bring in your lamp base and we will custom fit a shade at no charge. Our service department specializes in lamp and fixture rewiring, custom painting, and polishing and lacqering. We take your old lamp or fixture and make them "new" again,( we recycle your old lighting!) If you are a do-it-yourselfer, we will help you find all the right parts you need to complete your project.