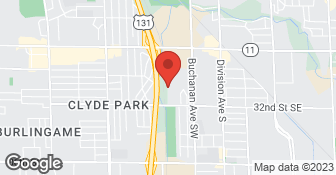 We know Michigan water! We do not contract our work out, we are a family-owned business with over 100 years of combined experience. We offer Michigan's best water treatment Systems, Drinking systems with 100% Customer Satisfaction Service. Rated # 1 in the World Customer Satisfaction by RainSoft Factory. We are Michigan's problem water specialists! Made in America with a Lifetime Warranty! FREE WATER TESTING AVAILABLE!! https://www.bluewolfconcepts.com/water-testing  …

Since 2007, Specialized Plumbing Services Inc has been serving the Zeeland, MI area and surrounding communities. The owner, Brian, has over 15 years of experience in the field to ensure every job is taken care of quickly and professionally. From large to small jobs, we can handle it all. We are locally owned and operated.  …

They were very punctual, polite and professional! Responded to our calls and emails fast! Explained the process very well! Works with another contractor who uses a special boring system that left us with only two wholes in our lawn. They put in copper and spent a full day working. We have a very long driveway ! Every one was friendly and professional. They did a great job cleaning up. They even spread grass seed on our lawn. They may have left a few dents in the lawn from the heavy equipment but I think that is expected. Very happy with the work!

Description of Work
Put new water line in from road to the house. We had the old Blue Pipe from the 80's.

Description of Work
They drained two septic tanks. All went very well. The gentleman doing the pumping was Andy. He was very friendly and professional

When we moved into a newly flipped house in Eastown, we found out the entire sewer needing replacing when water started backing up into our basement on move-in day. (Lovely.) McDonald was recommended by a friend, so a plumber came out and ran a plumber down the sewer to see what the problem was. He said that the sewer, oddly enough, went to the back of the house instead of the front, like the city records show, and that was going to be a very big problem. We weren't sure about that, so we had the owner, Scott, come out and give us more information. He talked us through the process of a new sewer, and since we were so skeptical about the sewer heading to the back out of the house, he offered to have his "number one" camera guy come double-check. Thankfully, that double-check revealed the sewer was going out the front of the house after all! So, we weren't able to fully move forward on the massive job until after a third McDonald employee came out, which is why I put them as a "B" for quality. But they were completely professional, took care of all the necessary paperwork to rip up our street, and made it as painless as possible for us after that. Some of the guys overlooked in the notes where the water pump needed to be moved, so we had them back out to fix it. They were quick to admit that it was their error and, though they couldn't fix it completely, they did the best they could. Appreciated their honestly. They were also patient with us while we got a second opinion for such a big job AND while we waited for the sellers to pitch in for the cost.

Description of Work
Brand new sewer line from house to street. One visit to run camera, another by owner to explain massive job, another plumber to confirm (and then correct) first's findings, then two days of work on the sewer, then one more follow-up job to fix a mistake we found.

THEY ARE OKAY PEOPLE. I USE THEM ALL THE TIME. I'VE NEVER HAD ANY PROBLEMS THAT WOULD MAKE ME WANT TO USE ANOTHER COMPANY. THEIR PRICES ARE OKAY TOO.

Description of Work
I HAD MY SEPTIC TANK PUMPED.