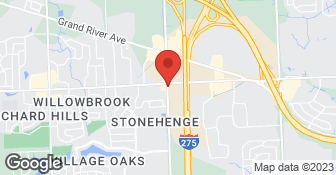 We did not see any initial problems. However, a couple of years ago, our handyman went up into the attic to determine why we were getting some condensation on the ceiling. He discovered that the extra roll insulation installed by A&Z was covering up the soffit vents, and the attic was wet with moisture and mildew: the wood was starting to rot. The ridge vent appeared to be "squashed down" with no place for damp air to exhaust. We called A&Z roofing and they sent out a representative, who told us that everything was fine: the problem was that we had not examined the roll insulation to make sure it hadn't settled to block the soffit vents (note: our attic is accessible only through a hall ceiling, and we are in our 70's, so we don't go up there very often). He also said the ridge vent was working perfectly, and the reason we couldn't see even a trace of light through it was because it contained a filtering foam. He reiterated that the peak vents should remain blocked with plywood. He was very jolly and friendly but offered no help and was clearly making an effort to disavow any problems with the original installation. Our handyman looked at the dripping water and removed the plywood blocking the peak vents. He installed an exhaust fan in one of the vents and applied mildew-killing paint to the worst areas of mold. He then made sure that the existing soffit vents were totally clear. Of course, we paid for the handyman's work over and above the original high cost of the roof, considering the small square footage of our roof. Well over a year later, the attic is finally dry and the mold is pretty much gone. When we look at our ridge vent, it clearly is not as open as ridge vents we see in other houses in this area. We suspect a failure to install supports to maintain the exhaust space in the long ridge vent, or some other problem of that sort. The shingles still appear okay, and we haven't had any leaks. However, the unresponsive, dismissive attitude of the A&Z representative did not impress us. Of course we did not expect them to send out a crew to do repair work free, but we'd hoped for some useful, honest information from the guy. We would never refer a friend to this company.

Description of Work
A & Z did a tear-off re-roofing for us in 2004. The job seemed to go well: they removed a power exhaust fan, covered the peak vents with plywood, and said that the ridge venting system working with the soffit vents would be adequate to ventilate the attic, even though there are no soffit vents on the rear side of the house: the only soffit vents are across the front. They also installed some extra roll insultation between joists.

Sam came out promptly. Qouted roof and submitted proposal WITH photos within a day or two.We agreed on price and material (which was an EPDM/rubber roof). He asked for a small deposit unlike others that asked for half UP FRONT.He scheduled us within a week. Work was done in a day on a 2000' industrial flat roof.We were VERY impressed and pleased and would highly recommend. Jim Fillmore - Detroit Muscle Technologies

The estimator/supervisor, Kevin, came out and got up on roof and walked around to see what was needed. Explained what work would need to be done. Pointed out lack of ventilation; suggested putting in soffits and building a saddle at chimneys to divert water and ice. After explaining the work needed, he emailed us a quote with expected work. After looking over the quote we had additional questions which he answered over the phone. After we narrowed down the companies Kevin came back over and sat down with both of us and went over everything again and answered any additional questions. We asked for shingle samples which he left at the main office for us to pick up, but I believe had it not been convenient for us to pick up he would had brought them out to the house. We went with A & Z because they came in with a good quote and was very patient with all of our questions. I felt he was honest and hard working. I did not feel pressured at all. We are very pleased with the new roof and the crew cleaned up the yard exceptionally well. Kevin was the supervisor as well as working right with the crew. Job well done.

Description of Work
Complete tear off and roof replacement. Replaced a strip of metal flashing that had come off.

I did not go with the contractor. I went with another roofing contractor that I found on Angie's List.

Description of Work
I called for an estimate on my roof. The price was way too much considering the other estimates that I received. Also, the man talked so much and about how much work it would be to replace my roof, that he did not leave me a written estimate, nor did he explain what the cost would include.

I thought it was going to be a horrible messy job but A & Z worked meticulously to protect our shrubs and property. I'm a stickler for the detail of work and they met or exceeded my expectations. I also obtained 7 other estimates and A & Z were very competitive. Excellent quality of work.

Description of Work
A & Z did a complete tear off of my roof 2 layers of shingles + removal of the clap shingles on a 65 year old home in Grosse Pointe. I also had Dura venting installed by A & Z Roofing.

THE ROOFING COMPANY THAT CAME AND DID THE WORK ON MY HOME DID A GREAT JOB. THEY WERE VERY PROFESSIONAL AND EASY TO WORK WITH. WHEN THEY LEFT, EVERYTHING WAS CLEANED UP.

Description of Work
THIS COMPANY CAME AND REPLACED THE ROOF ON MY HOME.

The main focus of Moonshine is to keep the exteriors of all residential homes and local businesses alive and well. Mother nature can make it very difficult to maintain a clean and well polished property - this is where we come in.  …

We are Debris Free LLC, we offer gutter cleaning, gutter guard installation, window cleaning, and light fixture cleaning. We are a local company (Oakland county) and we take pride in treating your home like we would treat our own! We offer 100% workmanship guarantee and would love the opportunity for to service your home! 5% senior/military/first responder/ teacher discount as well as referral benefits.  …

Installation and repair of roof & gutter.

How is A & Z Commercial Roofing overall rated?

A & Z Commercial Roofing is currently rated 4.3 overall out of 5.

What days are A & Z Commercial Roofing open?

A & Z Commercial Roofing is open:

What payment options does A & Z Commercial Roofing provide

No, A & Z Commercial Roofing does not offer eco-friendly accreditations.

Are warranties offered by A & Z Commercial Roofing?

What services does A & Z Commercial Roofing offer?