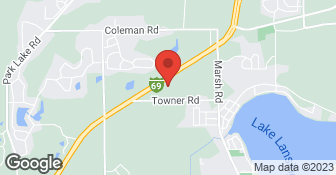 The Meridian Company is fantastic. The work was done swiftly and the workers cleaned up so we'll each day. They were quiet and respectful and my infant son was able to nap in the next room over while they worked. The whole job was finished faster than estimated and is absolutely beautiful. Will definitely be using the Meridian Company again.

Description of Work
Remodel a walk in shower

We had previously had Meridian replace our water heater and furnace for more efficient models, and were very happy with their work. And they have also done some plumbing work for us. So when we needed a bathroom remodel they were on our list of places to call for quotes. We have always been happy with their work, but assumed that they were more expensive than other companies. We were surprised to find that their quote was very competitive, and that they were actually planning to do the job to a higher level than the competition. They set the bathtub in cement where other companies were going to use foam. They routed the fans out through the roof where other companies were going to vent them into the attic space. We of course picked Meridian. They offered better quality for the same price. And we could not have been happier with the work they did. They are reliable, professional and get the job done!

I have had work on old plumbing, since my home was build in 1932. They do a great job with the older homes. I have also had pipes replaced a number of years ago and it has stood up well. Call them about every 2 years to clear drains to the street, also maintain my tankless waterheater.

Description of Work
Meridian is my plumbing choice. They have done a number of plumbing jobs for me in the past years. Always reliable and responsive. Not the least expensive, but I have trust in the work

Work went well, results are outstandiing. Workers were friendly and open to suggestions. Salesperson in the office was very helpful without being pushy.

They were here at the time frame they gave us. They were very professional & courteous. They told us they would do the a/c and furnace on the first day and the water heater on the second and they completed both as promised. They did an excellent job of cleaning up after themselves, in fact the area they worked in was probably cleaner than when they started. We were very satisfied with their work and we would hire them again as well as recommend them to our family and friends.

Description of Work
A new air conditioner, furnace and hot water tank. We ended up with a tank-less water heater. We also had them put in a cold air return and another heat register in the master bedroom. We have a long ranch home and it used to take up to 4 or 5 minutes to get hot water to the other end of the house and they ran a return water line so the hot water is now in the kitchen and bathroom on the opposite side of the house in seconds.

fine - there were two possibilities and the less expensive one worked.

Description of Work
Fixed the outside faucet

very well as usual , have used before

I called them on a Monday. By Wednesday, they were on-site. fixing the issue. The technician was friendly and courteous (something not to be taken for granted when dealing with contractors in general). He fixed an issue that another plumbing company didn't fix. Very happy. I'll be calling them again.

Description of Work
Drain pipe underneath kitchen sink was clogged and not draining.

The repairman was very professional and the work was excellent! I have dealt with the Meridian Company for many years and have always been happy with their service and work product!

Description of Work
I discovered a slow leak from a toilet in the 1/2 bath. I shut the water off to the unit and called Meridian and scheduled an appointment for inspection and repair. The workman showed up on time determined the cause of the leak and had the necessary parts to fix the leak with him. He replaced the H20 Fill Valve & Flapper. The leaking device was 16+ years old

They were unable to solve plumbing issue (which another plumber did) Also left a leaking pipe in basement after installation. They are very expensive, but do not provide the level of service and expertise on would expect at that price range.

Description of Work
We had plumbing work done as well as installation of hot water heater. They were unable to solve plumbing issue (which another plumber did) Also left a leaking pipe in basement after installation.

I was very satisfied with the work that they did. In fact, I think we have some routine maintenance scheduled coming within the next couple of weeks. For pricing on the plumbers, they are a little on the high side but I think that’s universal so you’re not going to be able to get away from that.

Description of Work
We had them install our water heater.

We are a frequent flyer with them. They are excellent. They are professional. They are reasonably priced. I have no fault with anything they have ever done here.

Description of Work
They come out for scheduled semi annual check ups for a myriad of things. Generator, furnace, water heater, heat pump, air conditioner, everything I have.

They did an excellent job. Their work was great. They stood behind their products. We actually had a leak in the shower and they came back and fixed it without cost. They are top notch. We were very pleased with the results. They kept things cleaned, organized and out of our way. They took care of things really well.

Description of Work
They did a number of remodeling projects. Faucets changed, bathrooms remodeled, and other little things.

They were very meticulous. I've already referred them to a neighbor. They even made some improvements that the previous people had done incorrectly.

Description of Work
They replaced the humidifier that I had.

It worked out it was fine. They were very competitive. They brainstorm and helped customized for handicap. My husband designed it, but they did a lot of customizing for it and urged us to use like grab bars in the shower.

Description of Work
Redid the bathroom and a kitchen

I think they're fantastic. We haven't been to any other company because we like their service. We had a problem with the toilet and they were there within 24 hours and fixed it that day. The guys are great.

Description of Work
Replaced the toilet.

We love them. We thought they were the greatest. We've moved away from them now and we miss them.

Description of Work
The came once a year and went through everything.

Description of Work
They completed some plumbing work.

They were great, always have been. They do an great job every time. Excellent. They generally are pretty high, but you get what you pay form.

Description of Work
Remodeled an half bath.

It went okay. I was very happy with the service. The workers were excellent. They were very thorough and explained what they were doing.

Description of Work
They perform my furnace service. They did a furnace inspection to make sure that it was running okay and properly.

We've used them for years, they work well, they honor their coupon, they give you a call, give you a fair time range two three hours not the day, they were running late that day and they did contacted us to say he was running late, is it okay to come after the time, it's after the delineation that they had expected. Probably they have done service on our house six time and the only complain I had one time they put in a trap door to access to change the water tap for the out doors and a trap door broke it wasn't functioning well and they didn't replace it, but other than that I've been happy with them. They honor their coupons, their reliable about showing up and explain the work need to do and have done.

Description of Work
I used The Meridian Company for heating and a/c service. To check out the air conditioner and they also did a cleaning.

They did fine. They were timely, punctual, easy to get along with and professional.

Description of Work
I used The Meridian Company for plumbing service.

I love them. They do a great job. I bought a plan from them and they come out twice a year and check the air. They are very thorough, accurate and they clean up after themselves.

Description of Work
They did air conditioning and furnace stuff.

it was a fine company. They recommended another company to refinish the original tub.

Description of Work
gave us advice on how to repair a crack in our tub liner. Let us know that the fix would only be temp.

How is The Meridian Company overall rated?

The Meridian Company is currently rated 4.4 overall out of 5.

What days are The Meridian Company open?

The Meridian Company is open:

What payment options does The Meridian Company provide

No, The Meridian Company does not offer free project estimates.

Does The Meridian Company offer a senior discount?

Are warranties offered by The Meridian Company?

What services does The Meridian Company offer?