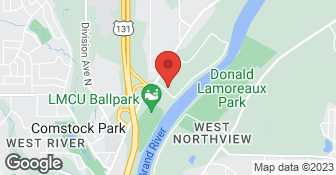 BEWARE!! You WILL be taken advantage of if the owner is able to - by word of their own mouth! Take a look at BBB and see for yourself (No, I have not put a claim in but a few before me have) $2000 to "remove" a ~40ft cedar tree and 10ft ornament tree! Stump grinding not included nor will they treat your property well. We also had a large tree removal quoted for $8000!!! We had the luxury of time and were able to shop around to have the large tree removed by a more trustworthy company for $4000 (stump grinding, removal, and property repair, if needed, is included) Save your money and find an arborist who acts with integrity and treats YOU with respect!

The estimate was ridiculously high. $3400 for the project. 2 years ago this same project would have been $800-1000 max not including clean-up. This is not how recovery from the pandemic will work for businesses!

[Member Name Removed], The dead tree and large lead that you wanted removed were both hazardous. In order to keep the crew and your property safe equipment would be needed that is simply more expensive to use. We never have claimed to be the cheapest, and we refuse to put our customers or crews at risk just to make an estimate look more attractive. Risk is cheap, safety isn't. We appreciate the opportunity to give you an estimate.
1.0

They never even followed up until a week after the job was done by Platinum tree service who were excellent. Will not bother contacting them for future projects.

That’s not true. We talked three different times about scheduling. We were not interested in price the job any lower. Please call us if we can give you a free estimate in the future. Thanks!
1.0

I asked for a work quote for the work. A man came out with heavy equipment. He saw a large tree stump that was near my work area. He looked at the stump and quoted me to have that removed. I informed him that the tree stump was not my biggest concern and the root system created by that stump needed to be removed. He told me that this would be completed, never provided me a contract to sign. When I returned home that afternoon I was missing my tree stump and the root system in my Way was still there. I called timber ridge back on a Monday as the work was completed in a Friday. I received no answer and thus left a message. I called a second time a few days later and left a second message this time with a person. Still never a call back. I then completed the work myself which took me 30+ hours to complete. They finally billed me a month later which I then contacted them again and actually spoke to someone who offered only to come redo ‘the work’. I explained that I had completed it at this point and would not be paying them the amount they were billing me. They sent the same man out to review the work and noted that it looked ‘fine’.............Which it should as by the time they came back I had completed the walkway and retaining wall that I had been working on. I then contacted the Better Business Bureau to prevent further contact as they had not wanted to work with me anymore. No contract, no clear understanding of work to be performed, no communication, yet still being billed. DO NOT HIRE THIS COMPANY

We are sorry that you felt this way however we do value our customers opinion and tried hard to rectify the situation. We did not see any remaining stump debris left to grind. We have been in business for over 20 years and strive to do our best.
5.0

Thank you for the business! We appreciate to opportunity we had to work with you!
5.0

Dustin was great, he was able to come over the same day I called him, and had his team removing the large branches later that day. Thanks!

Thank you for the work! It's been a pleasure doing business with you!
4.0

Tore up my front lawn dragging cut trunks across the grass.

It was ok except they tore up my front grass dragging cut trunks across the lawn. No offer to repair. Cost $300 to repair.

They showed up with a huge crane and lifted the tree off our house. Great and knowledgeable crew cleaned the site and were very responsive.

Description of Work
Large line tree fell on our house during wind storm.

Worst company ever. I have dealt with many companies, but from the top to the bottom (Owner), over all was the worst service and extremely unprofessional especially the sales representative who forgot to mention many thins that were and were not covered (Like cracked driveway concrete from Crane Truck, not covered). Clean up was a nightmare, as it was done way under par and remains that way. The tree removal crew, were top notch, it went down hill from there. The saleman rep, (Tyler), was extremely rude and unprofessional while trying to collect their money, (which was pending through the insurance company). They sent clean up crews several times and it still remained a total mess. I contacted the owner, who told me, speak to your sales rep. I won't even get into the stump remover man who asked me if I had "A honey", to remove my fence, because he didn't get paid to do it. Later I was advised they would remove the fence and replace it back to code. NOPE, oh, they put it back together, but never tied the top to the pole, so it was not up to code as promised. After I refused to pay, until this work was completed, I was threatened with a LEIN on the home. This is laughable, as the insurance company had not sent a check yet, which I explained 3 times in 3 different phone conversations to their Accounts Dept. My sales rep called and actually started raising his voice to me because they had not recieved their money, (Perhaps because he is paid on commission? ). I would recommend searching around Grand Rapids for a more reputable tree removal company. There are many reputable tree removal services in Grand Rapids and surrounding counties. Unfortuantely I was in a hurry as the tree landed in my pool and didn't want more extensive damage to the pool. But please, look around, check the Better Business Bureauand reviews. You don't want to go through this mess. Final cost, $6,250.00 For one tree removed via crane, a fence not up to CODE, one stump shredded down and one **** of a mess left behind. See photos below.

We are sorry that you had a unpleasant experience with our company. We appreciate your feedback. Please call our office and let us know if there is anything we can do to correct the situation. Thanks!

Forrest Tree Care specializes in large, technical removals and tree pruning. I am a second generation arborist and have been climbing trees for over 20 years. We have the skills, experience and equipment to get hazardous trees on the ground safely and efficiently, and to prune large trees while making them safe and beautiful. We are a local, owner-operated company and love working here in West Michigan. Our set of skills and years of experience allow us to do big jobs with minimal impact to your property, especially if the tree is over established landscaping or any buildings. Hire us to get it done right the first time, and we're sure you'll be more than happy with the results. We also plant trees and can provide consultation for urban planning and forestry, or for landscaping at your home.  …

Big Bear Tree Care is a locally owned and operated company that values honesty and integrity and treats your property with respect and care. We offer tree trimming and removal services that are customizable to the needs of the home or business owner. We pride ourselves on the quality of our work as well as our commitment to outstanding results. We look forward to building lasting relationships with our clients and guarantee your satisfaction! Please call today.  …

Liberty Tree Landscaping Services is a family owned business that specializes in all aspects of lawn care from simple mowing and mulching to whole yard cleanup and tree trimming. We can also do landscaping projects from patios to retaining walls. Call us today so we can help turn your backyard dreams into a reality.  …

No, Timber Ridge Tree Care, LLC does not offer warranties.

Are there any services Timber Ridge Tree Care, LLC does not offer?