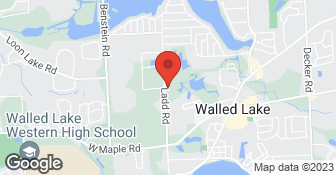 A & R Lawn and Landscape Services, Inc. (A&R) has been in business for over 30 years. From our humble beginnings of two friends (Al Albarran and Robert Riccardi) starting a lawn maintenance company in 1982, A&R has grown into one of Michigan’s finest full service landscape design and construction companies

I put in a 1000 square feet of brick pavers in my backyard in 2019 in Roseville, MIchigan. I used A & R Landscaping. They did a good job on the brick pavers, but it needed touchups. The owner said that the they would do the touchups when he came to my home to get my final payment. However, in 2019 they did not come out to do the touchups. However, each month in 2020 thru October, I contacted them by email and received no email response. I then started to call both the office and the owner, Al l Albarran's cell phone number in June while I still kept emailing them. They never did not respond to my emails nor my calls. So near the end of October 2020, I called them and left a message that I would leave a bad review if I did not hear from them by November 2020. They called me within 30 minutes and told me they would be out in November. Now it is December 2020, and it is snowing. No one has called, emailed, nor showed up. I would recommend that you use someone else for your brick paver and landscaping needs.. Their customer service is not just awful, they ignore you, which is even worse. Save yourself some grief and use someone else. You will be glad that you did!

Description of Work
Put in Brick pavers in backyard

I noticed that my driveway was plowed before other companies plowed for my neighbors. During heavy snows, they came twice in one day. They did a thorough job, did no damage and displayed skill and care maneuvering around cars parked in the driveway. My only issue is that they marked the perimeter of driveway with un-attractive flags that tended to fall over. Next fall I will ask them to use sticks instead (even if I have to provide them).

Very punctual. Completed the job as specified and cleaned up afterward. Very satisfied. Will hire again.

Description of Work
Brought in fill and gravel in a lot we own that was extremely low & muddy in spots due to excessive rains . He came in did the job and cleaned up afterward.

We have been using this service for eight years. We pay $220 for the season from November to April. The trucks come out and shovel our driveway before we even get up! It is so nice to be able to go to work no matter how much snow has fallen!

Met me on time for an estimate, drew up plans and met me again to go over them and quote a price. A and R had some good ideas and their price was good. Date was set for the work and here is where A and R faltered. They missed the installation date and then a couple of more dates and they did not keep informed of why they kept delaying the project. However, once they showed up they worked steady for 3 days until the project was complete and the work exceeded my expectations. I would recommend them because of the quality of the work.

They never showed up or returned calls, found another provider.

We showed up 3 weeks in a row and someone else cut the lawn each time before us. We did not bill for these services. According to our contract if someone else shows up and performs the maintenance our contract is void. We would gladly perform services in the future.
4.0

Very well, although it did not snow much this year, on previous years with more snow their service was just as good.

Description of Work
Plow driveway and clear snow from walkway for entire winter.

They were very professional and did a neat job. They cleaned the place themselves and did a quality job. I had given a deadline for them to complete the job and it was all done. I will continue to use their services in future.

Description of Work
I used the services of A & R Lawn & Landscaping SVC for lawn care, about a month ago.

Domenico Brick Paving & Landscape is a Birmingham, MI based company with more than 25 years experience in Michigan’s residential building industry. We provide free quotes and design services. We offer flexible payment arrangements. We use quality brick pavers made by Unilock as well as a variety of other landscape materials. In addition to the paver manufacturer’s lifetime warranty on the structural integrity of the pavers, Domenico’s offers a 7 year warranty on our workmanship. Domenico Brick Paving & Landscape is a member of the SE Michigan BBB, and the Michigan Nursery and Landscape Association (MNLA.org). Domenico is also a licensed residential builder in the state of Michigan. Not required for landscape and patio work we do, but helps insure that his company is up to date on all rules, requirements, and new techniques for Michigan construction. This is another distinction that sets apart the services we offer.  …

We have been in business since 1994. During this time, we have installed hundreds of brick paver and natural stone landscapes throughout Southeastern Michigan. We carry Commercial Liability, Commercial Vehicle and Worker's Compensation Insurance. Take a look at our website to see our portfolio. Austin Brick Pavers LLC is dedicated to our community. We only employ local workers because we believe in keeping jobs local and we also believe in paying a decent wage for an honest day's work. Our employees are courteous and knowledgeable and always appear in Austin Brick Pavers LLC uniforms on the job site. As an owner of the business, I work hand in hand with my employees on the job site, utilizing my 19 years of brick paving experience and also my knowledge of architecture. I hold a degree in Architecture from Lawrence Technological University. We are a Unilock Authorized Contractor. We take pride in community outreach like sponsoring our local T-ball teams and the Adopt-a-Highway program.  …

How is A & R Lawn & Landscape Services Inc overall rated?

A & R Lawn & Landscape Services Inc is currently rated 4.1 overall out of 5.

No, A & R Lawn & Landscape Services Inc does not offer eco-friendly accreditations.

Are warranties offered by A & R Lawn & Landscape Services Inc?

What services does A & R Lawn & Landscape Services Inc offer?