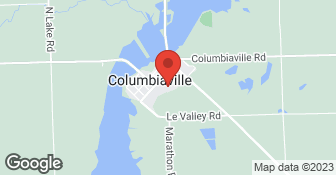 As a locally owned and operated business we feel invested in our clients and constantly strive for customer satisfaction. We won't leave until the job is done right! Call or click to schedule an estimate today!...

They were wonderful people. They did a good job and did what they supposed to do.

Description of Work
They did spray foam insulation.

We are excited to hear you are happy with our work! Thank you for the 5 star review!
5.0

These guys are the absolute best in the business! SprayTight did an amazing job insulating our entire new construction home. We shopped around a lot before deciding to go with SprayTight, and I'm so glad we did. Eric was involved in every step of the process, making sure that I understood the scope of work and the particular challenges of our all-metal-construction house. I have extremely high standards but these guys just blew me away. They delivered an air leakage performance level we didn't think possible with a metal building (0.51 ACH for the nerds wondering). If you're going to spend the money on spray foam, make sure you find someone who knows how to do it right. It's rare these days to find contractors who care so much about the customer and about getting the job done right no matter what, and these guys are it. I would recommend SprayTight to anyone interested in spray foam, no matter how big or how small the job. Thanks again, guys, you really hit it out of the park on this one!

I had a complete remodel of my property. I called in multiple contractors and completed a competitive bid process. I did not want to write a review until the entire house was complete. Well the house is done and here are some of the problems I encountered. First. I asked the contractor as a professional "can you fill behind the wall and leave the wall in tact for minor repairs". He told me he could and I believed him. Well he drilled hundreds of holes in the walls, and as he filled them they buckled outward and were completely unrepairable. This is a complete failure on the contractors part. Next there were multiple walls that were completely open and did not have any sheet rock on them. Well he did a very good job at avoiding to get the spray in the electrical box but he sprayed around the electrical box and locked them in place. These were adjustable boxes (and his laborer was told that) and the spray as like concrete . This forced a future rework to be competed that was a result of his failure to perform. I had multiple reworks that were performed as a result of his failures on the job. I will say this if he would have told me in the beginning he could not fill behind the walls and I would have only gone with fully exposed exterior walls I would have been very happy with the work and probably would have no even payed attention to the failure of performance around the electrical boxes. But I feel he was so focused on doing this job by filling behind the walls he completed failed to meet job requirements.

Description of Work
The work performed was a complete house insulation. He spray foamed all the exterior walls of the house.

My wife and I are doing a garage office conversion and were interested in spray foam Insulation. We have never used a service like this so we did not know much about it other than what we saw on TV or the internet. We put in a call to 5 local companies for information and estimates. Spray Tight was the only one that we were able to talk to right away. Some of the other companies took days to respond. Based on their quote price, easy fast communication, material to be used and estimated time to completion we chose Spray tight to complete our project. After talking on the phone they came out to give us an official estimate. They were punctual and very friendly. We felt very comfortable with them working in our home. We established a service date of just a couple weeks out. They arrived on time on the day of service and got to work right away. I was shown each step of the project. They really took care of us, and our project turned out great. This is really amazing stuff. The room was freezing before and now it can literally be heated by the light bulbs in work lamps we had in the room. I would recommend this company and this service to anyone. We plan on using them again when finishing our basement. It is always a nice thing to have your expectations exceeded, thank you!

Overall the service went well. They came in through the garage door, cleaned everything out and then performed the job as quoted. The only item I wish they did a little bit better on the service side was to tape off the area a little bit better where they were spraying. That smell was strong from the crawl space for the first hour or so after. Overall, it was a great experience! Very pleased!

From start the finish, the job went great. We had several contractors out to the house to give us quotes. Eric did a great job of explaining exactly what he was going to do, how they would do it and kept me in the loop the entire time. They were able to squeeze us in, to meet our timeline. They worked quick, did an excellent job of cleaning up and completed the job exactly as promised.

Description of Work
We had Spray-Tight out to install insulation in our attic and for an addition being built on our home. They used spray on the exterior walls and around the knee boards, and used fiberglass batts for the walls and celing of the room.

The quality of the work was professional. His communication was good. The only issue I had with him is the cleanup was not done well.

Description of Work
I used him to spray insulation in a commercial building.

Contacted several companies and decided to go with this one based on dealing with the owner directly, fair price, and talked about other big jobs he has done with companies such as costco. He was nice and corgal at first. Talked about possible damage of blowing out a interior wall if blowing in the insulation from the outside, which i agreed was okay. Hired him to do the job, and a team was out 2 weeks later. Halfway through the installation, Eric the owner was complaining that the job cost more then he anticipated and wasnt making any money on the job. When the team was done with the job, they left a mess on site, spray foam all over the siding of the house, which could have been peeled right off if the team didnt rub it into the siding. Left tape on the house, which is still there over 1yr later, incomplete insulation, I have several cold areas on the wall where condensation forms. I contacted Eric Qualls the owner several times since March of 2009, and he has given me the runaround with many different stories. Big jobs in spain, florida, custody battle for kid, too busy, ill call you next week "several times", ill get back to you, it'll all be fixed by this date. To this date nothing has been done,out over 4400 dollars. Now he is not even returning the calls... After doing some research, I found out this guy is not licensed with the state of michigan. I would stay far away from this guy, sloppy job, poor businessman, would not do business ever again with him. (UPDATE) After sometime Eric finally came back and fixed everything that was missing from the first visit (March 2011), including replacing the siding that was damaged from the first visit. This time he did a complete and excellent job, and we had no more condensation on cold spots and the siding was completly replaced with matching siding. The crew that worked on the house the 2nd time did a much better job then the original team. He also fixed some insulation that was done by a previous company which was causing snow melting on the roof, at extra cost (which is to be expected). If my original experience was like my 2nd experience I would have done business with him again.

Description of Work
Had insulation sprayed into an existing home on all exterior walls from the outside by removing the siding and drilling a hole in the wall. Had insulation also sprayed up in attic crawl space, and basement knee walls.

We had the fellow out to give us an estimate and he made several well informed suggestions. We had seriously researched the issues before. When we agreed to do the work , they arrived on time, took extra care with everything, threw in a couple extras. The crews were very nice and professional. They took the time to educate us as to the products -use and future. The supervisor was by twice a day to make sure we were happy. The job site was clean at the end. All in all a very good experience.

Description of Work
We had our crawl space insulated with foam insulation. We had paid more than $2,000 to do it with batts 10 or so years ago and it was just not helpful. The foam is under the floors and on the walls. It can't fall over like the batts and the floors are much warmer now. We also have a cathedral ceiling in a large room and they put foam insulation under the roof (between it and the ceiling). It was impossible to insulate any other way without taking out an original plaster ceiling . The house was built in 1926 and is close to 4000 sq ft

Great. They scheduled us within a week and were there right on time and done in a day!

Description of Work
We purchased an older home in desperate need of some TLC. The house is a bi-level but has a crawl space under a portion of the home. It was dark, damp and scary. Spray Tight Foam Insulators sprayed the walls and ceiling of the crawl space so that it is now bright, dry and much better if we need to access the space for any reason.

How is SPRAYtight Inc. overall rated?

SPRAYtight Inc. is currently rated 4.3 overall out of 5.

What days are SPRAYtight Inc. open?

No, SPRAYtight Inc. does not offer a senior discount.

Are warranties offered by SPRAYtight Inc.?

What services does SPRAYtight Inc. offer?