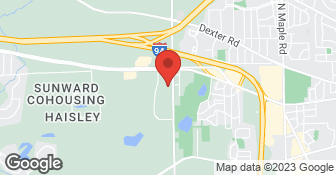 We offer a full spectrum of cleaning and maintenance services to both residential and business customers. Whether you’re a busy homeowner, a small or mid-sized business, you can trust us to provide you with unparalleled service, competitive prices, and outstanding overall value. As a family-owned and operated company we take personal pride in meeting your high standards. That’s why our services are guaranteed

Description of Work
This was the third time I used A-1 for cleaning all of my windows and screens inside and out - work the first two times was excellent, the third time the person responsible was a bit aloof -

Description of Work
I have used A-1 for window cleaning for several years now. The experience was so positive that I also refer them to my clients. Every person they send is on time, professional, polite and competent. I would actually give them an A+ if they did a little bit better at cleaning inside window sills.

They cleaned all the windows in my house. The guy that came was very prompt and professional and did a excellent job on the windows.

Work was done early and the quality was great. I was given a timeframe as to when the workers would arrive and they were done even before I got back. The only 'bad' thing was that they didn't move an outdoor table and chairs back on the deck after washing the windows. That isn't even a compliant though. Work was great, used them in the past and will use them again in the future.

Description of Work
Wash all exterior windows of the house including some very tough to reach areas.

They used to be under a different name and then they switched over to A-1. They did a pretty good job. They are usually on time and I am satisfied with their work. I've used them for about three of four years now. Each time it is different people who come out to do the cleaning. They send a postcard every year and then they follow up with a call too.

Description of Work
I have used A-1 Seasonal Services. I've had them clean my windows for a couple of years. I have about 15 windows and they did inside and outside. They didn't do the tracks of the windows. I have sliding windows.

Description of Work
I have used A1 for many years through 3 different houses. They have cleaned my windows inside and out, my screens and my gutters at various times. They are very professional and do a good job. I am not always comfortable letting someone inside my house, so the fact that I use them for inside window cleaning says a lot. They are very reasonably priced as well. I would highly recommend them.

Excellent...used their services three times. Great job on windows & screens...arrived on time! I plan on using them again.

I would not use them again. The discription of number of windows was unclear- one full window is counted as two windows--it was not a deal !

With all windows being unique it is hard to customize a Groupon for every home. We offered free estimates before the work was done. We are sorry you did not feel you received a deal when purchasing the Groupon.
4.0

Description of Work
Washed outside of windows.

it was window cleaning job. They always do a good job .I have used them for several years

Description of Work
Window washed on the outside.

I contacted A-1 Cleaning 3 weeks prior to the expiration of the coupon purchased. They did not have any open slots prior to expiration. After that, the only time slot offered was really poor timing for my schedule. The owner, Amy, would not look further in their calendar to accommodate. I let her know that I was pretty dissatisfied with her inflexibility. She could have cared less. She told me it was my fault for calling 3 weeks prior to the expiration of the coupon and I would have to take whatever time they had open. She admitted that if she looked out in her calendar a week further she had morning times (what I was requesting), but she didn't want to do that since it would be a few weeks past the coupon expiration. I called Living Social to see if they could issue a refund, but they couldn't. I called back (talked to Faye) and ended up having to schedule a time on 8/1 that was smack dab overlapping my toddlers' naps. I had to choose to either have a strung out, over-tired 1 yr old or not get the upstairs bedrooms completed. I altered our schedule and declined other plans for that day, but A 1 was a NO SHOW! I called on 8/2 to find out why. Amy told me she had no record of me calling back and scheduling an appointment. Now since the coupon has expired she refused to honor it. Again she could have cared less that my day was completely rearranged waiting for them and simply reiterated they had no record of my second call...seems rather convenient for her since she already has our $60 and our first conversation went so poorly. She said she would have someone complete $60 worth of work, but that is not what we paid for when we purchased the deal. Refused to refund the $60 or honor what was advertised and purchased. I was admittedly aggravated and dissatisfied with her, the way she chooses to run her business, and deals with customer needs and expressed this in our conversation...again she could have cared less. I guess, why would she care? She already has $60 for work they have not completed.

Description of Work
I got a Living Social Deal to clean 20 double-hung windows and screens.

We had given this customer multiple dates to try to accommodate her schedule she stated none of the mentioned dates would work, she was going to contact Living-Social for a refund (we cannot give refunds because she did not purchase threw our company she purchased threw living-social) and that was the last contact we had from her.
5.0

Very thorough, professional and efficient. Finished in less than 2 hours.

Description of Work
cleaned all windows inside and out on first floor of ranch home.

My husband came home and said, "Wow! Those windows look really good! Did you have them cleaned?" They were prompt and really good about calling me back quickly. Everybody was great!

Description of Work
THEY WASHED MY WINDOWS.

We specialize in outdoor cleanup - snow removal, gutter cleaning, roof cleaning, etc. We guarantee your satisfaction, and we won’t leave until the job is done right. We pride ourselves on the quality work we provide, while delivering great customer service! Call -or- click to schedule a free estimate today!  …

Michigan Elite Window Cleaning LLC is the best choice for Inside/outside window cleaning and gutter cleaning on residential homes and commercial buildings. Come to us for professional and courteous workers, and excellent work for a fair price!  …

How is A-1 Seasonal Services overall rated?

A-1 Seasonal Services is currently rated 4.7 overall out of 5.

What payment options does A-1 Seasonal Services provide

Does A-1 Seasonal Services offer a senior discount?

No, A-1 Seasonal Services does not offer a senior discount.

Are warranties offered by A-1 Seasonal Services?

What services does A-1 Seasonal Services offer?