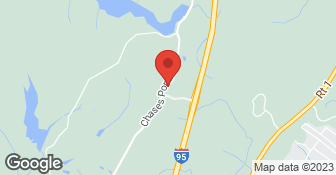 I contacted Frank Fogg on a recommendation from two people. He returned my call right away and offered to come look at the job the next day. He accommodated my schedule and was very professional in this regard. He was very friendly and professional while here. At that time of that visit, the work was ready to be performed (from my end), and I told him I had a tight deadline of two weeks. He repeatedly said that would be no problem. He suggested additional work that could/should be done and said he'd give his general contractor/friend my number. I thought, "Ok, fine, if that's how we have to do this." I left that meeting thinking the job would easily be done within the two week period; I cancelled meetings with three other individuals who said they would work with me. (I had chosen Frank originally because he was much more local.) Put simply, when Frank left my house, I never spoke with him again. Eventually I tracked down the "GC" he recommended (Ryan Fernald) via Google and called; those calls were never returned. I called Frank every 3-5 days (not overly pushy, especially given my tight time frame); he called back once on a Wednesday and left me a message saying, "I don't see any reason the work can't be done this week." The following Monday, after 11 days of stringing me along with absolutely no progress made on the room (not even any plans for progress) I left a voicemail saying I was still hoping to hear from him; I was disappointed we didn't connect the past week; I hadn't heard from his GC; but if I didn't hear from him by the end of the day, I would have to call someone else. Never heard from Frank Fogg again. Very unprofessional in my mind; what upsets me is - yes, I know it was a very small job ($200-$300), but when someone has a tight deadline, and makes that very clear from the beginning, do not keep saying you can get the job done and then just go incommunicado. A simple return of one on my phone calls to say, "You know what, lady? Just stop calling me; call someone else" would have been much preferred. Although he was nice, I would absolutely not recommend Fogg Bros Drywall.

Description of Work
Gave estimate for building door "header" in interior room; said he would do the work but did not

Fogg Bros Drywall is currently rated 2 overall out of 5.

No, Fogg Bros Drywall does not offer eco-friendly accreditations.