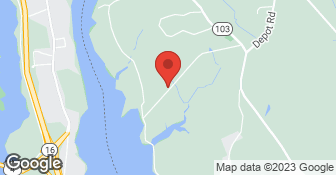 We are proud to offer a wide variety of landscaping services to make the vision you have, for your home's exterior living area, a reality. We specialize in lawn maintenance, hardscaping, patio building, irrigation installation and repairs, mulching, and more.  …

When Dylan and his team at Greenwood Landscaping are doing work on your property, you know that you are in the best hands. Cost efficient, no smoking, no swearing, and family owned and operated. Every client he works with becomes a customer for life. Call today and book your project!  …

They missed weeks and I had to call them to see what was going on. The mower tore up the lawn. Maybe the type of soil did play a role in the tear up of the lawn but they could slow down when making turns as not to pull up grass and leave bare spots in the lawn.

Description of Work
Weekly lawn mowing for the season

Marshall Bros Landscaping offers a number of services. I can only comment on my experience with its snow removal/plowing service. First of all, the price was exorbitant. $55.00 for each time they plowed. That meant up to 4 plowings when we had a blizzard in February 2015 here in Maine. I discovered that my garage door had been damaged: scuff marks and a hole punched in the door. The driveway had been plowed the night before. No one had driven into my driveway since then. There were no tire tracks in the newly fallen snow. Today when the snow plow came, I asked the driver if he was one of the Marshall Brothers. He said yes. I showed him the damaged door. He said that he had plowed the driveway the night before, but he categorically denied hitting the door with the plow. One of the first things that flew out of his mouth was 'I'll go to the police station with you and take a lie detector test". Now, you can't just walk into a police station and have them give you a lie detector test. So obviously, that didn't happen. His words though, and the quickness of his using them, suggest that he is used to getting confronted with one mishap or another. There is no way some else ran into that door. The scuffs and the hole look like they came from a snow plow, but he denied it. Needless to say, I told him not to come back here. Again, I can only comment on Marshall Bros snow removal service. My experience with them was not a good one.

He came out to look at the job within a reasonable period of time, but then the company was unresponsive when we called several times to get the estimate from him. Never did get an estimate. Couldn't hire as a result, so we don't know about work quality. Too bad--seemed like a good knowledgeable guy and we like to give our business locally, which he was.

Description of Work
We asked for an estimate to get our bumpy lawn leveled out.