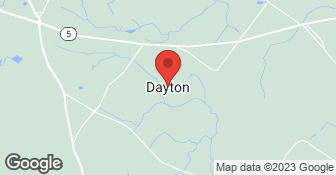 We specailize in the asphalt sealing buisness! If mention that u got my name from angies list get 15 percent off of booking of driveway with us ..

I had a Groupon for 1000 sq. ft. of driveway sealing. I have about 2000 sq. ft. I bought the Groupon and called, and I was told it would be another $170, so I wanted to set the appointment. It actually took a year to get done, as he had too many Groupon customers and was giving scheduling preference to his existing client base. Once we had the appointment, they arrived on time, could not have been more pleasant, did a great job, and left the area spotless.

Description of Work
Sealed the driveway. It went well.

Description of Work
Filled in cracks on both 40'x 80'driveways, then sealed both of them. Looked very nice.

We lay driveways that last! With over 20 years experience in the paving industry we will provide customers with a quality driveway that will standout from the rest. Our team takes great pride in their work and the finished product or every project every time.  …

Locally owned businesses specializing in driveway paving and sealcoating. While also offering Hardscaping and patios. Call us for any asphalt jobs you may need done.  …

Ruck Paving is a full service, family-owned Maine paving company. We service all of Southern Maine and specialize in residential asphalt driveway construction and installation. We also provide parking lot maintenance and sealcoating in throughout Southern Maine. We also do commercial parking lot construction and road building. We have over 25 years of experience and the ability to do any size job with the highest degree of satisfaction. We are members of the Better Business Bureau and have an A+ BBB rating. Since 1990, we've paved over 6,000 driveways!  …

Black Majic Sealcoating is currently rated 4.6 overall out of 5.

Are there any services Black Majic Sealcoating does not offer?