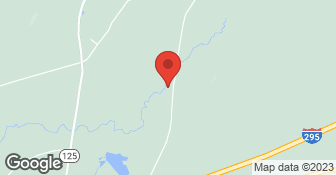 Interior and Exterior painting and carpentry company based in southern maine. specializing in residential new construction and repaints. We do restoration work from plaster repair to sheetrock and custom carpentry. Remodels from start to finish. Four full time employees and a few different subs are used. All of our employees have at least seven years of experience, as do our subs. Free estimates and all work is guarenteed. Very clean, trustworthy, and reliable. We do work all over southern maine and the mid coast area but will also travel. many references upon request. view a small portion of our work at augustineinteriors.com All major credit cards accepted...

We offer quality and affordable painting services. Give us a call to schedule your free estimate.  …

At Wallace Home Improvement, we have built an excellent reputation for customer satisfaction by providing quick estimates, great attention to detail and competitive pricing. Being a screened and approved professional gives you the peace of mind you need to allow us to give your home the attention it deserves. Call us today and let's get started!  …

Our business is designed with the customer in mind as far taking care of them one client at a time, we are a quality determined company. All our employees are certified by the IICRC Firm and we are insured, licensed and bonded for the customers protection. We accept all forms of payment for the convenience of the client.  …

I was very pleased with the individuals that did it. Considering getting past all the things that needed to be brought down from the walls and the bookshelves cleaned off, they were extremely good. I thought they were very helpful in every aspect. I was very pleased with them, and they were thoughtful, polite, and as clean as you can be, considering the mess. They were careful, they listened to any issues you have and took care of them. I think that the price was quite fair, considering that it took them eight days and two of them were working all the time and half the time, there was a third person. They were very well organized and polite and responsive.

Description of Work
Augustine Interiors painted the entire interior of my house, and repaired some wall boards.

Description of Work
No services performed Mr. Augustine called and gave me a quote over the phone. He said that he could fit me in if it rained as he still had some outside work to complete. I agreed on his price but wanted him to come over for a visual and give him some additional direction. We set up a meeting for Friday morning at 9:00. I left work to meet him and when I arrived home, there was a message on my phone from him telling me that he had childcare problem and could not meet with me. I called him 2-3 times to set up another appointment and he did not return any of my calls. I would have liked a response even if it was to back out of the job. Not very professional.

I pretty much use them every time I need something done. I have them come about once a year to do any improvements I need to have done. This time when they came they redid all the cabinets, painted the ceiling, painted the walls they patched everything up and filled the nail holes. The owner of the company was on site all the time and I felt comfortable about that. I appreciate the quality of their work, they are prompt and professional. I feel their rates are reasonable I will use this company again and I recommend them.

Description of Work
They redid kitchen cabinets, painted the ceiling, painted the walls, patched everything up and filled nail holes.

Brendon (the owner of the business) completed the work over two days. On the first day, he brought another employee, and on the second day he worked solo. I was struck by how steadily they worked; it seemed like they were mudding within minutes of walking in, and throughout the day I heard constant sanding and scraping and mixing of joint compound - they worked for eight or nine hours and I never really noticed them taking a break. Brendon and Rick were pleasant and courteous, and were also really clean. Obviously, sheetrock is pretty dusty stuff, so there's bound to be *some* dust no matter how hard anyone tries to minimize it, but Brendon and Rick made very little mess, and cleaned up the vast majority of it. In fact, on the first day they worked (mudding and sanding upstairs, in the finished basement, and in the dining room and entry way) Brendon and Rick finished up with their work at around 4:30, and we had guests over for dinner at 6:15 with minimal wiping down of surfaces in the dining room. The work was done in two full days of work, and was consistent with the estimate we received. Now we're planning on having him trim out some windows and take care of some other finish work as well.

Description of Work
Our modular home came pre-sheetrocked in the main living areas, but over the last couple of years the house settled and a lot of cracks appeared. In addition, my husband has been finishing off the basement and the upstairs - a long term project that has lasted several years - and has run out of steam and interest in drywalling. The result was a hodge-podge of small drywall projects: a few places that needed new sheetrock, some areas where the mud needed to be sanded more and smoothed out, and a number of cracks that needed to be taped and/or mudded.

It was a pleasure to work with Brendon from start to finish. He is prompt, he does what he says hes going to do and his price was good. You can't ask for anymore then that!

Description of Work
Brendon has done many projects with me. The last project was a complete repaint of the interior of the house. The quality of the work was outstanding!!!

Brendon the owner showed up for an estimate and made everything easy to understand we felt very comfortable talking to him. The crew all showed up on time and looked professional and ready to work. The exterior needed a lot of attention and thats what it got, power-wash, scraped, sanded.... painted. It looked amazing so we decided to have the inside done also. There was some water damage on the ceiling in the kitchen so the drywall was fixed and i couldn't tell where it had been. We changed every color in the house and had the trim repainted, they were fixing every little ding dent and crack all over. We are very happy with everything, on budget, on time, clean, easy to deal with, very comfortable leaving for work with them in our home and came back to a clean house everyday. I would recommend them to anybody

Description of Work
I had Augustine interiors paint my exterior first then decided to have the inside done as well. They also fixed my ceiling where there was a water leak from the upstairs bath.