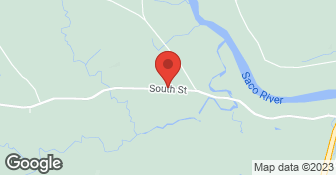 Ruck Paving is a full service, family-owned Maine paving company. We service all of Southern Maine and specialize in residential asphalt driveway construction and installation. We also provide parking lot maintenance and sealcoating in throughout Southern Maine. We also do commercial parking lot construction and road building. We have over 25 years of experience and the ability to do any size job with the highest degree of satisfaction. We are members of the Better Business Bureau and have an A+ BBB rating. Since 1990, we've paved over 6,000 driveways!...

I was impressed with the timeliness of Bob Ruck’s response to my initial call. He literally showed up at my place within 30 minutes of my call, and provided me with an estimate. His estimate was the better of two I received and accepted his offer. I was flexible on start date and time. He provided me with a day’s notice, so I could accomplish the tasks I needed to do to clear out the 1920-something barn board garage. His crew of six showed up on the day of the project. The crew worked well with one another removing the former part concrete-part plywood-part carpeting, and completed the new asphalting before lunch. I was given precise instructions on proper care of the new asphalt. Overall, I was very impressed with the entire process and would certainly recommend and use them again for any future project.

lot of cracks were not filled or filled very little. just not happy with their job

I contacted Ruck Paving in March of 2019 through the form on their site. Bobby got back to me within a day and went out to my house and did up a quote and emailed it later that same day. I had no idea what a driveway should cost, but after some Googling it seemed like a reasonable price. He quoted $5 a square foot for everything including tear-out, grading and the new driveway. (2019 pricing). His quote also included recently done driveways in my area so I could drive/walk by and check them out. I wasn't ready for the driveway immediately, so about 5 months later he checked in to see when I'd like it done. I told him mid to late September would work. He came and ripped out the old driveway on September 10. He was back on September 19th to do the new driveway. He and his crew showed up just after 8 AM, ready to go. They were done by 9:30. I didn't realize it would be so quick but he had a crew of 6 and it was obvious that they all worked well together. It was like watching a paving symphony. The finished driveway looks great, no more heaves or cracks and it actually matches up with the garage floor, a first in 14 years in the house! You'll end up with a quality product if you choose Billy Ruck and his crew.

The section of driveway that required paving was approximately 300 feet long, straight and flat. Ruck Paving was hired to prepare it and pave it. They showed up at 8am in the morning and were completely done with the job by 1pm, which I thought seemed very fast. He told me to keep all cars off the pavement for 5 days, I kept it blocked off for 8 to be safe. Within 11 months severe cracking and crumbling started on both edges of the driveway in numerous places along its length. I called Bob and after several messages he contacted me back, told me that it was due to people driving on the edges (patently false) and he would “fix it” by torching the asphalt and melting the cracks. This did nothing but make it uglier. Now, almost three years later, the entire length of both sides of the driveway is crumbling and cracking off, up to 8” from the edge or more. Every contractor I have spoken to since he did the job has told me that the cracking is due to poor preparation; it was a rush job and after spending thousands of dollars, it looks terrible. None of my calls have been returned from him since they came and “fixed” it in 2017. No one else will touch it without redoing it. I would highly recommend avoiding Ruck Paving.

Description of Work
The home I purchased in 2014 and currently live in had a dirt driveway. It is straight and flat, and wanted to get it prepared and paved. I contacted 3 different contractors to quote the job. Bob Ruck did not have the best price, but I felt the price was fair, and he had the most accommodating schedule, so I hired him to do the job.

I never received another phone call from [Member Name Removed] after the first time we went to repair the cracked edges. My phone number has been the same for over [Member Information Removed] years and trust me I get back to everyone very quick. When I was there telling him why it cracked. You could clearly see tire Ruts in the grass of the edges of tar where vehicles were driving off the edges which is not good for asphalt. I didn’t say who did it but again tire marks on the lawn means tires went off edge. And as far as the base prep there wasn’t any. It was a long dirt road for years that we grading existing material quickly and paved. Not sure who did the prep work there years ago. Once again not us. Sorry for you customers that have to read negative comments like this but once again. Everything the customer reported was false.
5.0

Great! Ruck was the only asphalt company that would talk with us because it was a small job; other companies wouldn't even take our number or hear details about what we needed. Ruck came out and gave us an estimate and said he'd let us know when they'd be here. He added us onto another larger job that he had in our area. Called when he said he would. Came when he said he would. Job was done quickly, professionally, and clean up was great. Most definitely recommend him.

The guys were prompt getting here on a Saturday morning, were VERY pleasant, did the job excellently, cleaned up and were gone. Because of our schedule we had to reschedule at one point and Bob was very understanding and pleasant. He was very easy to work with. I would hire him again in a heartbeat and would recommend him to others for this type of job.

Bob Ruck was not the lowest nor the highest estimate but he provided a detailed work plan and he stuck to it. He was punctual, quick and professional he and his team did an excellent job.

Work was performed and completed on the scheduled dates

Ruck Paving's crew did a fantastic job! They removed all the old pavement and regraded the driveway in the morning and paved it right after lunch. From the time I contacted Ruck to the time they were here doing the job was less than 2 weeks. A previous contract that I had with another paving outfit hasn't even contacted me in over 5 months. Will never use them again. If I need paving done I will call Ruck. Professional crew from start to finish.

They were prompt, efficient and friendly. The work was done very well. Couldn’t be happier.