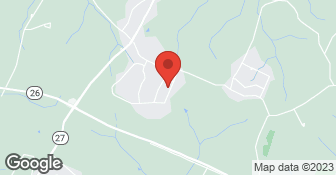 IN BUSINESS SINCE 1979. 15 EMPLOYEES. All WORK IN HOUSE EXCEPT FOR FENCING. ALL EMPLOYEES DRUG TESTED AND BACKGROUND CHECKED. COST DETERMINED BY THE JOB. LICENSE #42490. INSURANCE #Q89-0102236-M. ADDITIONAL EMAIL: mark@eclandscapedesign.com.  …

DJA Landscape & Irrigation Inc. is a design build firm serving the Howard & Baltimore area. We specialize in custom landscapes and automatic sprinkler systems. For 24 years, DJA Landscape & Irrigation, Inc. has operated with a basic principle, to deliver a professional product, on time, in a manner that exceeds our customer's expectations. Our local referral base is a testament to our operating principle.  …

Our goal is to provide every customer with a flawless and worry-free experience for every project we complete. We provide an endless list of outdoor and property services, so be sure to contact us with any questions you may have! When you work with our company, you will always be working and corresponding with the owner/operator Sean Bartz. Sean works directly with every client to ensure they are informed with the best information available to personalize every client's personal preferences in the most practical and efficient manner, specifically catered for your property. Specializing in Landscaping, Hardscaping, Design, Drainage, Horticulture, and Masonry; serving majority of DMV area. MHIC #137028. MDA- F1170  …

Contacted Paul and made appointment for him to come by Thursday morning to estimate a couple of jobs in our home. By noon, no one showed up so I contacted him myself. He said something came up and he forgot to send a text. Bottom line - my time is not free either - all I ask for is a phone call - Would not recommend there service.

Description of Work
Was suppose to meet to discuss project and provide an estimate.

He is great! He came recommend to me by a friend of his, but it was a great experience. He is reliable and shows up on time, does fabulous work and I will definitely use him in the future!

Description of Work
He repaired some plumbing leaks and other things that needed to be done.

Hired this contractor in mid-September 2013, to finish the basement per state and county codes. It should have been a straight forward job with a bedroom, a walk-up counter area with a sink, a small bathroom, and an open area. - The framing work took more than a week even though I was told it would take about 3 days. - The next week, work was done only on one day(electrical rough-ins were done that day), and no one showed up for the rest of the week and no updates were forthcoming. - The plumbing rough-ins were done the following week, and the initial county inspection was called towards the end of the that week. - The County inspection failed. The contractor informed me that the inspection failed because of lack of coverage for the sprinkler system caused by the original builder of the house not doing it right(this was sprinkler system that had passed inspection when the house was built a few years ago). - Furthermore, the contractor told me that the sprinkler system needed changes to make it per code, and came back with an estimate of 1960 dollars for making the changes. - Since this sounded too high, contacted a different sprinkler contractor, who estimated that some minor changes may be needed for the sprinkler system, caused by the framing that was being put up as part of finishing the basement, and gave a cost estimate of 500 dollars. Made the sprinkler adjustments for the cheaper price of 500 dollars and paid for it out of my own pocket (because my basement contractor refused to pay for it, even though the changes were necessitated by the framing that was put up, and doing everything to code was his responsibility). - Went to the county office and requested a copy of the failed inspection report. The inspection report stated that the framing inspection had failed, for framing-related reasons. - At that point, closed out the contract with this contractor, for the cost incurred for the work done up to that point.

Description of Work
The provider started work on refinishing a basement to include a bedroom, a walk-up counter area with a sink, a small bathroom, and an open area. The original contract was for 35,000 dollars, however that contract was closed out with a modified contract in the amount of 17862.00, reflecting the work that was done up to that point, as explained in the section below.

They were very good and I am satisfied.

Description of Work
They did our backsplash in our kitchen.

When I called Erik at Apex because he was recommended by my neighbor who also had fire damage because of my home, I received immediate responses. Because of the level of reconstruction and amount of money needed, I asked for references. Erik gave me a list of over 10 people, and I called each one of them. I also visited the homes of several of the references to see the work firsthand. Everyone spoke extremely highly of Apex and the level of work they do. After narrowing down the estimate, which included a full reconstruction of my home, a deck, various technological and high end upgrades, and demolition of the current home down to the studs, Apex began construction on my project immediately. They are great guys to work with, extremely communicative, and caring about my project as if it were their own. We are in the middle of the rebuild, but up to this point, I can't say enough about how awesome my experience has been through the estimates, picking out what I want in my home, and demolition of the project. When Erik realized that the insurance estimate did not include enough for some of the damage, he worked directly with my adjusters to make things happen. Apex uses the best sub-contractors with the same level of professionalism that they have given. A++

Description of Work
I had a house fire in August 2012 which necessitated pretty much a full rebuild of my home. I contacted several contractors, and Apex came highly recommended from several friends. Apex's level of professionalism, price, and integrity has been second to none. Receiving a competitive bid from contractors who knew that the work was under my insurance claim was difficult. Most contractors just wanted to see the insurance estimate and go from there. Because I wanted several changes to my home, I was looking for bids separate from the insurance estimate. Apex was the only company that didn't give me any grief around this. I received a fair, competitive estimate, and the process was as painless as possible. Going through the red tape with the insurance and mortgage company was difficult, but Apex maintained great communication and was extremely helpful throughout the process. Apex has completed the demo portion of the project and we are currently waiting for more insurance approvals to move on to completing the rebuild of my home.

We had several guys come out to give us ideas and quotes for a deck, and from the start, we really liked Erik; he was very helpful, took a lot of time to discuss ideas with us and on top of it all, he also gave us the best quote! I'd like to add that he came highly recommended by our realtor, who is an architect by trade so knows his stuff, and he has used Erik for several projects of his own. We found that to be rather trust-inspiring.Erik was also very responsive to us changing plans - we had first planned a smaller deck with a patio underneath but than changed our minds and went with a larger deck with no patio underneath (at least, for the time being - we're probably going to add that in future and will hire Erik again to do this, most likely!). Anyway, they actually started work a couple of days before the estimated date, which was great as we couldn't wait to get our deck! They got interrupted due to inclement weather but resumed work quickly and finished within the week, which we were really impressed by - they were so hard-working, it actually wore me out just watching them!! It also felt good to have people around whom we felt we could trust - I had no issue having them go into the house to use the bathroom and leaving them unsupervised. The finished product is marvelous - it looks great - I can't really speak to quality as I have absolutely not the first idea of this type of thing. time will tell but I'm pretty sure that the quality is great, and I'm also sure that he'd come out again to fix any little problem that might be cropping up. If you're looking to build a deck, Erik is the guy to go to - I highly recommend him and his company!!!

Description of Work
They built us a pressure-treated wooden deck with a small privacy wall and also installed a screen door.

We really liked them. We actually went with someone else just because of the price. We will consider using their services again in the future.

Description of Work
We got a quote from Apex Contracting LLC. We did not use their services. They came out may be a month ago to give us a quote for doing our basement and to repair a drywall.

We are very happy with the work they did. We are so happy with their work that I am planning to send them a thank you note. They were very conscientious. They also worked on the weekends so that the job was done quickly. They paid a lot of attention to details. We had the bottom of one of our railings with some old spindles that had rotted out. They replaced the bottom by keeping the spindles that had historical values. When some of them were not put correctly they re did the work. They took initiative to do this work, as they wanted to make sure everything was all right. I got to know about them through a service website. There was a representative as soon as I contacted them.

Description of Work
They re did our porch. They replaced the old wood on the porch with mahogany. They stained it beautifully and it will last a lifetime. They also did other woodwork and replaced wood that had water damage. They also did some paintwork.