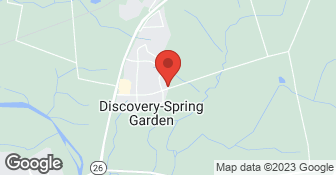 MVP can take care of all your plumbing needs....

The job was running smoothly. Jason knew what he was doing. He had a great helper. The whole drain was replaced due to roots. The inspector came and approved instantly. It got done in one day.

Description of Work
Replaced the drain

Jason was very professional, incredibly prompt, and did an excellent job for a great price. He came by to give us a free estimate on the day we requested one, and was able to squeeze us into his schedule the next day. He had the job all finished within an hour. We'll definitely hire him again for future plumbing needs!

Description of Work
Installation of a new bathroom vanity and replacement of plumbing pipes under sink, including new shut-off values, which were corroded in place.

Very Well- Jason listened to our needs, answered all our questions and did very nice work.

Jason showed up on time and got right to work. He installed the bathroom faucet with no issues and moved on to the toilet. He was here about an hour. The jobs were neat and well done. Jason cleaned up the area. I will definitely use Jason again. This was our second time using his services.

Description of Work
Installed an new toilet and replaced a bathroom faucet.

They do everything from plumbing to complete remodelling and renovation. He started as a plumber but he expanded his business. He is very knowledgeable. He is very quality focused. He is one of the cleanest contractors I’ve ever seen in my life. When he leaves for the day, the place was cleaned up. The quality of the work was outstanding. If you have an emergency leak and it’s a Sunday, he doesn’t come out and charge you with an additional charge. It’s a fee as the fee regardless. His punctuality was excellent. He knows his business and understands customer service and satisfaction. We tell him that he owns this house because he has done such a great job.

Description of Work
We used a plumber called MVP Plumbing. It's called Most Valuable Plumber. They completely redid a half bath in the downstairs of the family room.

We needed a toilet installed that we had attempted to do ourselves. We had difficulty because the floor was not level with the drain and we couldn't get it secured tightly to the floor. We contacted Jason and he gave us a price of $165. His price was much better than other contacts we had made. When he came he found that the flange was broken. He replaced it and gave us a good price on the parts needed. It didn't take long to get the repairs made and the toilet installed. Everything was tight and nicely finished off. There were no messes left for us to clean up when the job was complete. We would definitely contact Jason again.

Description of Work
Installed a toilet.

Jason arrived exactly on time, reviewed our work requirements and made some helpful and money saving recommendations for the work to be done. All of the work was completed the same day , and he called to follow up to make certain we didn't have any problems or issues. We have used MVP for numerous plumbing repairs as well as a full remodel and upgrade for two bathrooms. He also does dry wall work and he remodeled our family room, as well as adding drywall to the garage. When he does his work it is simply top notch with outstanding quality. He is very neat and never leaves a work site without cleaning up. His skills with tile work are some of the best we have ever seen and when he is finished there are no crooked lines, or popping tiles several months down the road. He lists his business as plumbing but in reality he is a full service remodeling contractor. Outstanding individual and Jason takes pride in his work , something that is getting harder to find these days.

I called and spoke with Jason Harris, the owner of MVP, and we scheduled a date and time for him to stop by the house to see the space and what I had in mind for the bathroom. I already had rough in plumbing in place but no walls or anything. I thought I would have to hire someone else to do the framing and drywall etc and planned on asking MVP to just install the plumbing and fixtures when it came time to do that. I didnt realize that MVP also did bathroom remodeling, which included all the other work I needed done. It turns out that having MVP do the whole project cost me a lot less than it would have with separate contractors and was a lot easier to deal with. I gave Jason my budget and he really helped work with me to keep me within that budget. He suggested materials and fixtures that would both look nice and not brake the bank. I decided right then and there that I wanted to work with Jason so we scheduled the installation and he dealt with the permitting needed. I purchased all the fixtures separately (Bath, Sink, Toilet, Mirror etc). and Jason even offered to pick it up for me. Jason and his crew were on site bright and early on the day we agreed to start the install and worked quickly and efficiently. I couldn't believe the progress after the first day! The bathroom was done within a few days, looked amazing and worked flawlessly. They even noticed that my hose bib on the back of my house wasnt working properly and replaced it without me even asking. Jason is truly my Most Valuable Plumber!

10 Employees. No subs. Cost is determined by the job itself. Service Fees Apply for certain equipment. Extra charge applies for after hours and weekend services.  …

We are honest and earn our clients trust thru our attention to detail and work ethic building long lasting relationships that last a life time.  …

How is Most Valuable Plumber overall rated?

Most Valuable Plumber is currently rated 5 overall out of 5.

What days are Most Valuable Plumber open?

Most Valuable Plumber is open:

What payment options does Most Valuable Plumber provide

No, Most Valuable Plumber does not offer eco-friendly accreditations.

Does Most Valuable Plumber offer a senior discount?

No, Most Valuable Plumber does not offer a senior discount.

Are warranties offered by Most Valuable Plumber?

What services does Most Valuable Plumber offer?