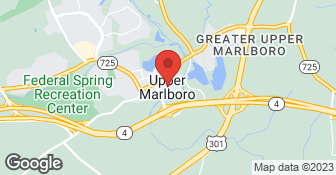 When our Insured and Bonded Professionally Trained Technicians arrive at your location, they'll begin with a pre-inspection of your carpets and upholstery to identify any problem areas of concern. Upon completion of this analysis, our technicians will advise you of the best cleaning solution, and the actual cost of the service. There are no hidden expenses! After our cleaning process is complete, we inspect your home or office to ensure you are completely satisfied. If not, we will rectify any of your concerns immediately prior to departing your location. We offer 24/7 emergency services. Call for details! We accept most major credit cards....

Every thing went well. Zenart staff arrived as scheduled and did an excellent job in cleaning the carpet.

Description of Work
The Staff of Zenart did an excellent job of cleaning my carpet. Carpet looks almost new. They arrived within the time frame that we agreed. The price for the cleaning was a bit pricey, but the carpet cleaning was great. The area covered included stairs, hallway, and family room.

UNBELIEVABLE! We moved into our home 2 years ago and the carpet was relatively clean, although there was a stain in the playroom that wouldn't come out caused by constant traffic between two sides of the house.That was the only dirty spot we had, as the homeowner was elderly and pretty clean. Since we moved in, we've had 2 professional cleanings and we've cleaned the carpets with our home shampooer about 4 times. The stain in the playroom and a similar stain in the entryway to our bedroom (caused by blue paint from a child's paint set) weren't going anywhere. Until Zenart! My mother-in-law had been raving about them for years, and we decided to check them out because they had a coupon. We called them and had to wait a week and a half for an appointment in the middle of the day on a Wednesday, but THEY WERE WORTH THE WAIT. The stain in the playroom is gone, as well as the stain in the bedroom. Our upstairs bedroom had a few stains due to a teenager spilling hair dye and weave glue on the floor. That carpet looks brand new. All of the carpets look brand new. I was completly amazed. We had been living with some of the stains for 2 years and to see them finally completly gone is incredible. They use some type of heavy machine that is mounted in their truck and does better than all the swirly rug cleaners other pros use. It was a father and son team and they were done in about an hour. They were super friendly and professional too. Even the nap of the rug is improved. The scheduler is pretty cut and dry - don't expect warm fuzzy feelings from her, but she gets her job done and is professional. We paid a little more than the special because we have relatively large bedrooms (our kids' room is 18x18, for example) and we got them to treat the stain in the playroom and deep clean a mattress. They were worth every penny and then some, so I gave them a tip on top of the fee.

They did an amazing job!! Would definitely hire again and refer them without hesitation. Only reason I marked them down on punctuality is that they only give you an appointment "window" instead of an actual time. They arrived a little past their 2 hour window. Extremely Professional and the carpets look like brand new!

Description of Work
I had them clean 8 areas and the carpeted stairway. As always, they did an outstanding job. My carpets were restored to pristine condition. My housekeeper marvel at the dramatic improvement in their appearance. The company is a Father/Son team that provides old school service with professional courtesy. They have invested in new extraction equipment which seems to elevate their cleaning process. I have use them repeatedly since 1993 and they have consistently perform well. In 2011, I experimented with an alternate Angie's List Top Performer. However, I returned to ZenArt in 2012 and 2014.

Mr. Jenkins and his son arrived promptly and immediately began working. Each took different areas of the house which allowed them to complete the job in approximately 1 hour. They did an excellent job, most noticeably on the wall-to-wall carpeting which had many stains. The both were very courteous and professional. I have used this company before and have been extremely pleased with the results. I would definitely recommend them.

I have used them before. They are professional and thorough. They have new equipment, the temperature is hotter and the extraction is more thorough. We had a scotch guard treatment and in the basement, we had them do a micro fiber treatment. I thought it was a great deal, for what we had done. They called back to make sure everything was okay. A while ago, we had a flood in the basement and after he cleaned it up, he came back on his own time to make sure everything was okay. I will continue to use them. With the new equipment that they have, they did a great job.

Description of Work
I had Zenart Carpet Cleaning clean the carpets in the family room, basement, 3 bedrooms, hallway and the stairs.

I like that it is a family-run business. A father and son team came and did a nice job.

Description of Work
ZenArt Carpet Cleaning cleaned the carpets in most of the house (5 rooms).

From the time they go here they were very polite & professional. They were on time and began the work. The work was done in sufficient time. They were very engaged in getting the job done.

Description of Work
They cleaned my carpet in 3 bedrooms & hallway. in addition to cleaning, they provided extra spotting & scoth guard the clean areas.

They came early and did some extra furniture, more to get at stain.

Zenart is the best. I have been using them for over 10 years and their service is outstanding. They always accomodate my busy schedule and are always punctual. They do a thorough job at a competitive price and are extremely friendly and polite. I often have alot of cleaning done and they always get it done in record time. They are truly professionals and do high quality work. Sean does expert work with my upholstery also.

Description of Work
I had 3 chairs and two ottomans cleaned and protected as well as 5 rooms, a hallway and 3 sets of stairs cleaned.

We have 4 technicians who have passed a background check. We are IICRC certified in carpet cleaning, upholstery and water damage. We accept credit card, checks and cash whichever is convenient for you. We give 10% off to new customers and seniors. We are happy to Let you know 200 degrees is now offering services in Kenya,Nairobi. 2 employees. No subs. Cost is determined by the job. Travel charges may apply. Extra charge for after hours flood damage service. IICRC certified.  …

Very respectful, experienced an locally owned company awesome hard worker. No job to big or small we can do it all from cleaning, remodeling, landscaping an much more we willing to work with any budget and guarantee to beat any price  …

We are a local, family owned business steam carpet cleaning, water damage remediation, maid cleaning, and drywall and painting services in Alexandria va, and the surrounding DMV area. We use top of the line truck-mount steam cleaning equipment, which is able to steam clean using ,over, 200 degrees water, and extracts water better than portable equipment. This allows us to provide a better quality clean than our competitors.  …

ZENART CARPET CLEANING is currently rated 4.9 overall out of 5.

No, ZENART CARPET CLEANING does not offer eco-friendly accreditations.

No, ZENART CARPET CLEANING does not offer a senior discount.

No, ZENART CARPET CLEANING does not offer warranties.