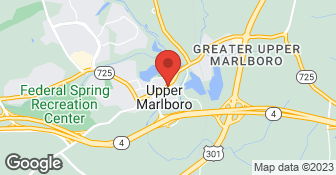 We are one of the best HVAC Contractors in Upper Marlboro, MD and Washington DC area specializing in Heater, furnace & AC installation & repair, Commercial HVAC service. We install Heat Pumps, air conditioning, gas furnaces and boilers. We also provide the service and maintenance of all of the above. Anyone who mentions Angies list will can clain a 20% discount on initial service call!...

Reliable HVAC Professionals! All work performed or supervised by a licensed Master HVAC technician. Whether you need a routine maintenance check or an emergency repair on a heating or cooling system, we are available to handle all of your heating, cooling and ventilation needs. We continually strive to exceed expectations by ensuring that each client receives the very best heating and cooling service. We have the experience and dedication to bring your dreams to reality! Specializing in Heating and Air Conditioning Services, we guarantee your satisfaction, and we won’t leave until the job is done right. We pride ourselves on the quality work we provide, while delivering great customer service! Call or click to schedule a free estimate today!  …

Family Owned & Operated, Grove Heating and Cooling, Inc. specializes in designing, engineering and installing complete comfort systems for homeowners and commercial property owners. Gary, his sons and a team of trained professionals bring over 50 years of experience in the HVAC industry, offering unmatched quality, exceptional customer service and family-like treatment to all our customers.  …

After a month or so the air wast as cold as it should be. It was about room temperature. They thought the issue was that they needed to add Freon . That seemed to work for about a month or two before the air would start to warm up again to room temperature. It was difficult to get him to come out to do the work. He doesn't work on weekends or come out after the work day hours. I do not like to have workers in my house when I am not there due to past experiences. After about a year of them coming out every couple months to just add more Freon. I was only able to work out times either during my lunch or before I went to work. When we would have a schedule appointment in the morning it would be at 7:30 but he wouldn't show up until 8:15 which left very little time before I had to leave to go to work. I had my home warranty come out and they found the issue was a faulty sauntering job on a set of pipes. He called me and I told him what the Home warranty company found he offered to refund me the $50 that I had to pay to get them to fix the issue. After about 2 weeks I still didn't get the refund he promised me I called him and he told me that he decided to not give it to me. He said that I did not give him the chance to find the issue. After talking to him he stated that he would think about giving it to me. After another week with out receiving the refund I called him again and he was very rude to me and said that the only way I would receive the refund is if i promised to only use him for all repairs.

Description of Work
They installed a new heat pump and air handler with a 5 year part and labor warranty.

Heat Pump repair and Installation. Air conditioning and gas & oil furnace repair and installation. Service agreements which allow you to have a service company respond within 24 hours of your call no matter what the weather conditions are.

We do not offer geothermal services