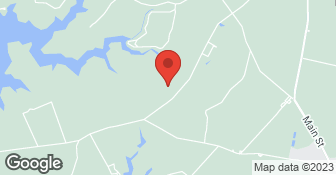 Family owned and opperated. Licensed and Insured. Specializing in all types of Roofing ....

Brian was terrific on the walk-through and suggested a partial roof replacement. He was cost conscious and managed our expectations perfectly. The workers came on time and while there was a lot of equipment and materials on the property, the clean up was top notch! No evidence that a work crew was ever there. Thank you for a job well done!

Thank you so much Mrs. [Member Name Removed]! We appreciate you taking the time to write this review. :)
1.0

Couldn't get them to show up for an estimate. No call no show, which tells me all I need to know about the business. Lazy unhappy people do bad work, just a fact. I would avoid at all costs!

Good morning [Member Name Removed], I called you this morning to try to explain that your appointment is scheduled for today. When you hung up on me I sent you a text with two pictures showing our schedule in our computer program and our handwritten schedule confirming that your appointment is today. Then you responded with a text saying not to contact you again or you would call the police. We have been in business for over 18 years and have a great reputation as you can tell by our other reviews. We would never just not show up. That is not how we conduct business. We are sorry if you thought that your appointment was yesterday and wish that we could have had the opportunity to talk and resolve this.
5.0

Our contractor hired Mid-Shore Exteriors to replace the roof on the house we had just purchased in November 2014. We were very happy with the look of the roof, and I believe they were in and out in one day, leaving nothing behind. I haven't had need to call them until a few days ago when we noticed a small leak coming through a small hole in our bedroom ceiling where we had anchored a hanging light fixture. I called on a Sunday, and they returned my call on Monday saying they would call back the next day to set something up. I was out of town and missed their call and completely forgot to call them back, so they very easily could have brushed it aside and waited until I called again. Instead, they sent a contractor to the house to see if he could come back the next day to take a look at the issue. He came the next day, identified the problem, and repaired the roof, which took several hours, and then they were on their way. Now, a few days later we just had a torrential downpour, and not a drop of water to be seen!

Thank you for the review we really appreciate it!
5.0

GREAT!!! The owners' were very professional and pleasant. The quote we received was very detailed, easy to understand, and we received it within a couple days of when the owner came to our residence to examine our roof and discuss the options with us. We are extremely happy with the price and quality of work performed. The roofing crew worked nonstop except for a lunch break, and continued working until the job was completed that same day. The entire crew was professional,courteous and respectful of our property. We would definitely hire Mid- Shore Exteriors LLC again!

Description of Work
We had all old shingles, tar paper, etc removed ( and wood removed as needed and replaced), and replaced with new archituctural shingles.

Thank you for the kind review Mrs. [Member Name Removed]
5.0

Very quickly. Easy repair done before we knew it.

No work was performed.

Description of Work
I contacted this provider to have snow guards applied to my 2year old roof. After not hearing back from them, I called again and was informed that the owner did not want to do any work here because when my home was built 2 yr ago the contractor chose another roofer to do the job. They did not even have the courtesy or professionalism to call me back to let me know that.

I'm sorry you feel this way but have the right to decline any work we are not interested in doing. We have been in business for over 12 years and have a VERY good reputation....as you can see from our other reviews. If you are having a problem with your roof I would recommend you call the roofing company back who just installed your roof 2 years ago!
5.0

Description of Work
A new roof was put on an apartment building. Excellent work and service with office personnel. I have two roofs that will need to be completed in 2015 and I hope Mid Shore Exteriors will be available to do both projects

Thanks for the review [removed member name]we really appreciate you taking the time! Just let us know when you are ready for the other roofs!
5.0

Although it took a while to get started due to weather issues and backlog, all went smoothly. Was especially impressed by lack of debris in yard thanks to their nifty and quot;dumpster on wheelsand quot;. No problems so far, and looks great!

Mid Shore Exteriors was excellent. They were very professional and I would definitely use them again in the future.

Description of Work
Mid Shore Exteriors put on a new roof for us.

They did it well and they did it fast. They did it all in one day and they cleaned up well. I was satisfied with everything they did. The price was right around what anybody would charge.

Description of Work
I used Mid Shore Exteriors to remove the old roof and they put new shingles on.

Mid Shore Exteriors was very punctual and professional. They fully replaced my roof and had to make some additional repairs to roof vents. They were very quick to come back to resolve some unexpected issues with our unusual roof. I would highly recommend them.

They are top notch. they clean up after themselves. They are excellent at what they do and reasonably priced.

Description of Work
They have done many services for me in the past; built a deck, painting, and handyman work.

Wesley D Gentry LLC. Family owned since 1974. We have been serving the State of Delaware and the eastern shores of Maryland for 44 years.Licenced and Insured in both Delaware and Maryland. Installing exterior quality maintenance free brands and products for residential and commercial. Now including my sons we are a family second generation company. We treat your home improvement project like it's ours. We also accept major debt and credit cards. Call or contact us today for your free estimates on Seamless Aluminum Rain Gutters available in 5 and 6 inch sizes. With 25 colors to chose from. We install Standard Gutter Guard with Stainless Steel Micro Mesh, As well as Aluminum Fascia Trim work. We also install Stainless Steel Ice/Snow Guards for Metal Roofs. We send all job debris to a local materials recycling center. For a free estimate call 302-398-3600 or send an E-mail to wdgentryllc@gmail.com. Also visit our web site at www.gentrygutters.com  …

AROCON Roofing & Construction offers superior services at an affordable price because we are your Maryland contractor. Instead of focusing on completing as many jobs as possible, AROCON focuses on providing quality work and getting to know our customers. This allows us to provide high quality, customized results and unparalleled customer service without adding extensive overhead or expenses. For all of your Roofing & Construction needs, you can count on our experienced team at AROCON Roofing & Construction. We service all of Dorchester, Queen Annes, Talbot, Wicomico, and Worchester counties. Call us today to make Home Improvement, Simplified. #rooftuneup.  …

Locally owned and operated business. We service the eastern shore of Maryland to Baltimore and all of Delaware. We have provided maintenance services for residential and commercial properties. We take great pride in our experience, expertise, quality, and customer service that we provide to meet the consumers needs. It is our mission to provide excellent workmanship and complete customer satisfaction from start to completion of a project. In order to understand the needs and expectations of our customers, we take great care to work and communicate with every customer in a professional manner. Our reputation is based on service, safety and quality, regardless of how large or small the job.  …

Mid-Shore Exteriors LLC is currently rated 4.9 overall out of 5.

No, Mid-Shore Exteriors LLC does not offer eco-friendly accreditations.

No, Mid-Shore Exteriors LLC does not offer a senior discount.