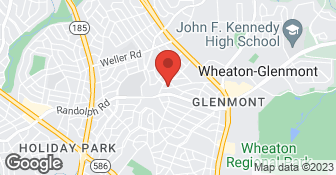 we been around the capitol area since 1990 we have good referrals license and insure, I have a total of 13 professional employees, helpers painters, drywall installers, carpenters, masons, tile and ceramic installers, flooring installers and refinish we accept visa master card true pay pal

Everything on the list of "failures" was fixed and the team performed in a very professional manner as well as being very courteous. Once everything was completed, all debris, leftover paint and other supplies were removed and any residual was cleaned so that you wouldn't know work had been done. Excellent. Our home passed DC Inspection without a hitch! Kudos to Miguel Perez and his team!

Description of Work
We applied for a business license for our DC house and in order to complete the process, we had to pass inspection. We failed the first inspection which is when we contacted our long-time contractor M.A.P. Contractors Co. Work performed varied from repairing cracks in the wall and ceiling, peeling paint, water damage, hard-wire smoke detector installation, exposed wires to be properly secured and covered, ceiling and pipes needed painting, door locks needed to be changed to thumb latch/slip open locks, kitchen window frame needed repair, kitchen wall and door needed repair, handrails needed to be installed inside as well as outside the house and the outside deck floor boards were loose and uneven. Also, the bathtub needed to be fixed and resurfaced.

MAP Contractors remodeled our bedroom which included refinishing the floors, skimming the walls, doing some demo, installing can lights, recessing outlets, and other various things. We have used Miguel in the past and had a great experience and were impressed with the quality. This time we encountered 3 large problems and the quality of the work was terrible. We could have done a better job at many of the things he did that we paid him to do for us. In hind sight we should have withheld payment until these things were fixed. Below are the items that were done poorly. - He recessed our outlets into the brick/plaster wall and each and every outlet are different heights. Two of them were the same hight before he recessed them but his employees decided to make them different heights anyway. - The skim job is terrible and there is not one and quot;smoothand quot; wall - The floors were refinished and they spilt stain on the floor from a step they were staining and Miguel refused to fix it and tried to pretend it wasn't a problem - The trim work in the photo is and quot;brand newand quot; trim work and it is uneven, mitered terribly, and looks in overall bad shape with nicks, clumps of caulk and other issues. Also one portion of the trim work was attached with ONLY caulk, no nails, no screws, no nothing, just caulk - They drove a nail directly into a water pipe and we were told the leak in our house was due to the storm we had and it could not have possibly been them driving a nail in the pipe. When we opened the ceiling there was a nail in the pipe.. Also the and quot;skimand quot; job they did to repair the ceiling is the most uneven it could be - They drove another nail in a radiator pipe and that was a mess to fix - I had a brand new High Velocity AC put in and during demo they cut completely through an HVAC line and didn't tell us they did it. We found out after we were testing our AC, and that was something else to fix. - They build a brand new wall with sheet rock and studs and the wall bowed in the middle. We pointed it out to Miguel before they finished and he said and quot;don't worry its not done yetand quot; but then the next day it was skimmed and trim added and it wasn't touched, it still bowed. Miguel never fixed it and again brushed over it like it was no big deal. Overall the floors look okay, the ceiling and most of the new sheet rock looks ok. Overall we are extremely upset with the amount of money we paid and Miguel's refusal to fix many of the things we pointed out. If this is the quality of work he seems to be happy with, then stay far away. We really wish he did a good job because we want to use them again and were happy originally... its a shame that this project was a disaster. We really wish we didn't pay so much until it was fixed. That is our fault. But Miguel pressured us that he had to and quot;pay his guys,and quot; but as a customer I should not have paid until it was correct.

Description of Work
MAP Contractors remodeled our bedroom which included refinishing the floors, skimming the walls, doing some demo, installing can lights, recessing outlets, and other various things.

I called Miguel (I have used them for years) and within 3 days the ceiling (it was over the weekend) the fan was rewired, back up and the ceiling had been painted and replastered.

Description of Work
We came back from a trip and our ceiling fan have disconnected from the ceiling and was hanging from the electrical wires.

Miguel and his team were fantastic. We have a relatively small bathroom so he could only work one or two guys at a time, but they were punctual every day, polite, clean, and professional. Their work is high quality and attention to detail is superb. I highly recommend his team.

thanks a lot for your comments about my company and the work done, it was a pleasure to work for you guys see you on your next project
5.0

Miguel and his team were wonderful to work with in so many ways: * First, Miguel's rates were very competitive and lower than others we priced and the quote didn't balloon with unexpected costs -- he charges exactly what he tells you it will cost. *Next, Miguel and his team were professional. Throughout the renovation process I primarily worked from home and can attest that Miguel's team showed up on-time and worked all day, cleaned up the work site every day before leaving, and were polite in all interactions. They also worked hard to ensure my work space was as quiet and mess-free as possible *Also, MAP's work product in our home was exemplary. We recently sold our home and received high praise from real estate agents for the well-crafted bookcases, marble fireplace, and open living room -- all which was done by Miguel and his team. We were told - and agree - that these well-done improvements were a prime reason our house sold so quickly and above our asking price. *Last, Miguel and his team got the work done during the promised time-frame -- there were no excuses or delays and every step of the way we were knew where we were in the process. After the great work Miguel and his team done on our home renovations we have hired MAP Contractors a number of times for projects big and small - from roof patching to an emergency, weekend-fix of plumbing. Since we moved we continue to hire MAP Contractors and recommend them to our friends because Miguel and his team go above and beyond.

thanks a lot for your comments about my company and the work done, it was a pleasure to work for you guys see you on your next project
5.0

Description of Work
I used MAP Contractors for exterior painting. They painted the porch and the back of my mother's house.

thanks a lot for your comments about my company and the work done, it was a pleasure to work for you see you on your next project
5.0

Very professional contact with Miguel Perez, and his group seemed well prepared, efficient and did a good job. nice people, would have them back soon to remove wallpaper, apply skim coat of dry wall mud, and then prime and paint.

Description of Work
lots of tasks...installed light fixtures in ceilings where there were non, interior wall and ceiling painting, repaired dry wall, and hung marble tile for a kitchen back splash.

Very well. The company owner was able to come out with a crew of two about 48 hours after my first contact with him. He got them working and went to get matching paint. They finished up what they could in one day and left the site to allow everything to dry. They spend almost another entire workday on-site finishing up. It really looks good as new in all four places where they worked.

Description of Work
Removal and replacement of moldy drywall in living room ceiling; repair of nail pops and cracking and separating drywall in multiple places; finishing and painting all affected areas

We pride our company on reliability, great communication, integrity, and quality work. We are experts in our trade and will do our best to keep you as educated as we can on your particular task or project. We look forward to earning your business! Seals Electric, LLC also specialize in electrical home inspection repairs, home inspection, panel installation, meter install, home rewire, basement wiring, and new addition wiring. We offer our services to residential clients. Our licensed electricians are dedicated to completing the job on time and within your budget. When you want quality electrical work done at your home or business in Laurel, MD, call on Seals Electric, LLC we are committed to providing our customers with the highest quality of service.  …

GAC Services is a residential cooling, heating, and electrical contractor setting new standards in the Maryland HVAC and electric market. Since 1970, we’ve developed a strong reputation for providing the Montgomery County and Frederick County areas with reliable cooling and heating services. In 2014, we expanded our service offerings to include electrical services—allowing us to offer our customers the same great service in a new area of business. Additional DBA: Gaithersburg Heating & Cooling  …

Award winning service for over 40 years. Our trained and experienced electricians can offer you a full range of interior and exterior lighting options and electrical installation services. Whether it is one light fixture, a custom lighting layout or a comprehensive wiring service upgrade or Heavy-Up, we have the necessary tools, knowledge and experience to turn your plan into reality. Please include your contact information and property address when contacting us.  …

How is MAP Contractors overall rated?

MAP Contractors is currently rated 4.8 overall out of 5.

What days are MAP Contractors open?

No, MAP Contractors does not offer eco-friendly accreditations.

No, MAP Contractors does not offer a senior discount.

Are warranties offered by MAP Contractors?

What services does MAP Contractors offer?