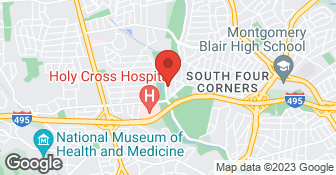 I highly recommend Matt Taylor, his brother and their crew for any foundation repairs or other related work. Matt is a true professional who is a real expert at what he does, explains things in a calm and understandable manner, and follows through on the agreed-upon plan in every detail. After one thirty-minute conversation with him, I knew he was the right person for my job. Matt and his brother are really easy to work with and together they refined our original plan as work progressed. And the crew was really on top of things, working carefully, skillfully and fast(!). The fact that they don’t require payment until the job is complete kind of tells you that this is the type of company that you want to do business with.

Description of Work
remove a basement window, block in and waterproofing the opening, build a retaining wall and regrade the area to better control the flow of rainwater.

The estimator came in a timely manner, and communicated with me via phone and text regarding getting an estimate to me. But I never heard from him again.

Perfect. Best concrete work I've ever seen. The 12' x 12' pad for the shed was absolutely level in all directions after it dried. The driveway is now 2 years old and not a crack or any other problem with it. Matt also repaired a broken support pier under our house, and did other foundation work after the 2011 earthquake. Great guy to work with, and an awesome crew of concrete finishers.

Description of Work
Driveway, walkways and pad for shed

Matt came highly recommended from an architect and a structural engineer that we knew. We solicited additional quotes, but Matt was the most reasonable by far. Additionally, his specialty is foundation repair and helical piers, which many other companies don't do. Matt is very professional, honest, and straightforward. He can be a bit abrupt, but he and his crew do great work! Our house was basically sinking and the back wall had started to cave inward, which we didn't find out until they had started digging. Matt made sure we understood the problem and had the structural engineer present to explain different options. He was very thorough and made sure that even more minor repairs were completed as we had requested. All of the work was done in a timely manner, and we felt aware and involved in the process every step of the way. Lastly, our neighbors are home during the day, and they told us that the crew was always very careful to clean up at the end of each day and were as quiet as possible.

Matt's team did exceptional work and for great value, and I would totally use them again

Description of Work
I Beams needed to be installed

Matt showed up within 24 hours in order to give me an estimate for installing 4 I beams. Work involved sinking the beams into a concrete floor, installing cieling bay blocking and through bolting the work. - His price was extremely reasonable! A week later, as agreed, his team showed up, a few minutes early even...they did the whole job in less than a day. They were extremely courteous and polite and cleaned up very well after the job was done. I would use Matt again in an instant and recommend him 100 percent!

Description of Work
Matt's team installed 4 I-Beams in our house to shore up a failed wall.

Very knowledgeable, very professional in every way. Superb workmanship. Have already recommended them to a neighbor

Beautifully. They were very knowledgeable about how to repair our issues. They kept a very clean work site and responded to all of our questions promptly and professionally.

Matt, his brother Brad, and their team showed up on time a little after 7, which allowed them to complete the job by late morning so I didn't have to stay at home all day. The filling of the void with concrete went exactly as planned. They had all of the supplies they needed with them, once they dug out underneath the stairs they found precisely where the void was that was letting water through, and they worked quickly to fill it. After the concrete had dried, they ensured the work area looked precisely as it had before the job started. This included relaying the sod as it had been, and they added additional mulch to a nearby flower bed to cover up any indications that they had to up turn the ground in that areas. Also when they were diagnosing the void beneath the stairway, Matt surprisingly discovered one of the downspouts in my backyard was not connected to a pipe so water was pooling underneath my deck instead of being funneled downhill into the yard. Matt graciously offered to correct this issue for me, and was very understanding in terms of how this would impact the overall price of the job. He also appreciated the fact that I preferred the new pipe they connected not be positioned to drain into my garden, and he was able to find a creative solution to ensure my summer garden would not be compromised from a deluge of water. draining into it If I have future exterior water issues with my house, Matt will definitely be my first call and I plan to refer him to friends and neighbors in my area! I found him to be highly competent, honest, willing to be flexible with his approach, and his pricing is very fair and competitive.

Description of Work
Matt Taylor and his team used a concrete mixture to fill a void that had emerged between the top of my basement walk-out stairs and the soil underneath them. The void was leading to sediment being washed into the drain at the bottom of my staircase leading to a risk of the drain clogging and water getting into my basement during heavy storms. Matt also connected a pipe to one of my downspouts because the water was, to my surprise, previously pooling underneath my deck and could have created long-term foundation problems.

I had read great reviews of Mr. Taylor and how he was straightforward and honest. I wrote and asked him if the task I needed done was one I needed a professional for, and said I was willing to pay him for the time it took to write a response. He gave me the advice and waived the fee. This is so rare that I just had to comment. I believe he will give me a good deal if I ever use his services. Like that he is so nearby - just on the other side of four corners. Thanks very much, Matt!

Description of Work
Gave advice as to what I should do with my basement floors.

Drainage & Erosion Solutions (DES) is an award-winning company that provides assessment and repair of all drainage and erosion problems for residential and commercial properties. We are a design-build firm, with both engineering and contracting divisions; offering aesthetically pleasing and professionally engineered solutions to drainage and erosion problems. Our team members are year-round, full-time employees with a strong reputation for technical knowledge, attention to detail, great customer service and general excellence. All DES consultations, assessments, and installations are performed by a licensed professional soils engineer, or landscape and drainage systems designer. These professionals have several decades of combined design and contracting experience. Clients like working with us - much of our business comes from referrals and from our top rankings among the most popular contractor ratings services .  …

M Taylor Enterprise is currently rated 4.8 overall out of 5.