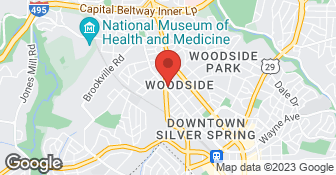 COST DETERMINED BY THE LOCATION AND VALUE OF HOME BEING INSPECTED....

Fantastic job! Sean was very thorough and checked every single thing in the home. He provided a 74 page report including photos of all of the items that needed to be addressed. I recommend Sean to anyone who is looking for a great home inspector.

The price was a little bit on the higher side, but he is well-renowned in the area.

Description of Work
I used JD Grewell. The last time I used them, it was a follow-up from the previous year so it was an inspection.

Was referred to JD by many other inspector for our home inspection. Scheduling was easy and JD explained to me what he will inspect on the phone. I was informed that he will come with another inspector. Both showed up on time and they started right away. The inspection took over 3 h because of the size of our home. Afterwards he showed to me everything they found. The report was emailed to me the next day and was very detailed. The report was in a digital form with pictures. Would use JD again for any of my upcoming home inspections.

He is great. It went well and was very informative. I have used him on all of my properties.

Description of Work
He came and inspected the property.

JD Grewell claims to have had a lot of notable clients on his client list. However, I can only speak to my first hand experience. First, he quoted me an hourly price for a given time period. However, he brought another individual with him, and at the end of the inspection, attempted to charge me twice as much, saying that the price quote was an hourly rate. He only refunded $200 to me after several phone calls after the fact, and I was still overcharged hundreds of dollars. The inspection report was three pages long, hand written, with a number of accurate but relatively small items on it, as well as a number of innacurate items. For example, he said my thermostats did not have emergency heat capability, which was not true. There were a number of rug fragments in the basement that he did not bother to move. I moved them several weeks later to clean up, only to notice large foundation cracks which he failed to notice. Some things he didn't catch: the doors are cut too small, one of the doors doesn't close properly because the door frame was installed incorrectly, there was air leaking into the basement from a poor seal, the central humidifier system didn't work, and the master bath floor is extremely uneven with many jagged pieces. In other houses I have purchased, the inspectors provided me with large books with detailed checklists, photographs, and explanations of how to care for my home and systems. JD provided none of these things. Just a three page, hand written report with relatively minor accurate and innacurate items, which he attempted to charge me significantly more than his competitors. Iand quot;m not sure why he has several and quot;Aand quot; ratings, my guess is that this reflects a lot of first time homebuyers who don't have a frame of reference for the quality they should be getting with a home inspection.

Description of Work
Home inspection of a brand new home in Arlington VA.

While the inspection and report seemed to be thorough, JD Griswell did his best to ignore me during the 3-hr inspection process. I found this quite frustrating as I

Description of Work
While the inspection and report seemed to be thorough, JD Griswell did his best to ignore me during the 3-hr inspection process. I actually felt like I was intruding. I found this quite frustrating as I am quite interesting in how homes "work," generally and obviously had a particular interest in this home. At the very least, it would have been useful to know beforehand that this was his style so I could have been utilized the time. He did point out a potential dangerous situation wrt to a collapsed flue for which I am certainly thankful.

JD and Sean were very professional and knowledgeable!! They arrived before the appointment time working on the outside. He didn't rush through the inspection! (big plus!!!) He checked the house from top to bottom. We are extremely satisfied with the job they performed. They answered all of our questions. He found aluminum wires which come to find out, not every home inspector would have caught that deficiency. JD's secretary (can't remember her name, sorry) is also very courteous and professional! JD is worth every penny!!!! I would definitely recommend and hire him again. :D

Contacted his office to inquire about the inspection of a home on which we have a contract to purchase. Receptionist was very helpful in informing me about availability of the inspectors for the time period in which I was interested. Once I was able to confirm the date with the selling agent, I called back and was told who would be coming to do the inspection (JD himself) and tips for having a good experience. She then let me speak to JD about the property and ask him any questions. On the day of the inspection he and an associate, Sean Troxell, were early and had already completed the outside inspection. He promptly pointed out issues that would need to be addressed. He then spent the next 2.5 hours checking all systems: plumbing, electrical, central heating, central cooling, roof, walls, ceilings and floors, foundation and basement, and major appliances. Once he had completed the inspection, as others have noted, he goes back to his car and writes up the report in about one hour then explains everything to you. I really appreciate that he is candid and professional in his assessment of the property. He will not make any judgments on what he cannot support with evidence. He will give his opinion on what he thinks if asked, but only the facts are in the report. He is not haughty about his skills, unlike other inspectors who profess to be extremely knowledgeable about all homes. His experience and thoroughness speak for themselves. I called him the next day to ask some questions, and he was responsive to my requests. He charges based upon the purchase price of the home. He probably costs more than other home inspectors, but you get what you pay for.

Description of Work
Typical home inspection for purchase. As he states, he can only inspect what can be seen.

This article describes his approach to home inspection better than I could: http://www.washingtoncitypaper.com/articles/26726/this-old-grouse .

Description of Work
Mr. Grewell performed a home inspection for us this morning. His reputation as the best in the business is certainly well-deserved, and I can't recommend him highly enough.

I got the recommendation from my sibling who also liked using him. He showed up on time with a clipboard. He spent 3 hours going through the house, checking appliances, walls, ceilings, floors, faucets. Running tests on bathrooms and kitches. He spent a huge amount of time in the basement looking for water issues, detecting issues because of smells. Looking at the water heater, furnace, outlets, corners, walls. He described any issue in detail. I am happy he didn't spend too much time chatting about nonsense and only about the issues that he discovered. Then he went away to write up the report and agreed to meet me in 1-2 hours for the full report. We received, in detail, all the information about every issue. I asked questions and got thorough responses.

Description of Work
Very professional, extremely thorough and took an abundant amount of time to explain all the issues to me. Believe me, realtors don't like him bcse he is so thorough. But, as a buyer, I find it refreshing that someone is looking out for my $$.

Real Estate consulting and sales services including helping buyers, sellers, investors, builders, estates, downsizing, upscaling in all matters related to buying and selling real estate. Our mission is to help people use real estate to achieve their long-term personal and financial goals. We work to make sure your best interests are represented when buying or selling your home to help you get further faster in life.  …

Super Service Award the past 9 years. Our goal is to become the best Home Inspection company in the DMV. We utilize technology to benefit our clients. We offer 24hr Online Scheduling, Our inspectors are trained to use infrared cameras and we use drones for hard to reach roofs. We are the only company in the DMV that offers a Performance Guarantee vs. a limited liability clause in our contract. We have performed Inspections for all the major home builders in the DMV area, small commercial buildings, and residential homes of any age and size. If you can live in it, we can inspect it. We don't compete on price, we compete on service - so contact us today!  …

Licensed in Maryland and Virginia with the required New Residential Structure certification for new construction inspections. Certification for Vehicle Mold Screening is part of our line of service. We offer a full line of Home Inspection services including HUD 203K Consultation for HUD or Fannie Mae loans, radon, mold and other environmental testing. We do not do radon or mold remediation. We are on time and give you affordable rates. Don’t pick a home inspector out of a hat, use a friend, someone with no qualifications, or because the price is the lowest. You may regret it later. We look forward to working with you.  …

Insured
All statements concerning insurance, licenses, and bonds are informational only, and are self-reported. Since insurance, licenses and bonds can expire and can be cancelled, homeowners should always check such information for themselves.To find more licensing information for your state, visit our Find Licensing Requirements page.
General Information
Free Estimates
Over phone
Eco-Friendly Accreditations
No
Payment Options
Check
Senior Discount
NO
Warranties
None

HOME INSPECTIONS AND DIAGNOSTICS ALONG WITH EXPERT TESTIMONY

JD GREWELL & ASSOCIATES INC is currently rated 4.6 overall out of 5.

No, JD GREWELL & ASSOCIATES INC does not offer eco-friendly accreditations.

No, JD GREWELL & ASSOCIATES INC does not offer a senior discount.

No, JD GREWELL & ASSOCIATES INC does not offer warranties.

Are there any services JD GREWELL & ASSOCIATES INC does not offer?