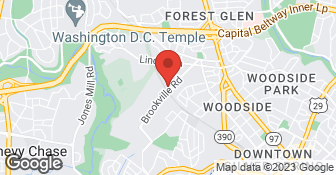 Our team of qualified heating and air conditioning professionals receive excellent training and possess the latest cutting-edge industry knowledge. This expertise is what allows B.M.C./Clower to provide our customers with exceptional and timely service. We have been servicing the DC Metro area since 1999. We are authorized dealers of Lennox and Carrier equipment and have maintenance and service agreements available. We service all major brands of HVAC equipment and do not use sub-contractors to perform our installations. We also fabricate all duct work in house and our trucks are equipped with metal manufacturing equipment. Financing is available for new installations. Our diagnostic service rate is $98. After our initial diagnostic, we will be able to provide a flat rate price that includes all parts and labor needed to perform any necessary repairs....

Very professional, had the job done within an hour, cleaned up the space and made recommendations for the future. They were on time at both the estimate and work phase. Will definitely use them again.

I had a 5 zone mini-split system installed by BMC/Clower in July 2020. It worked perfectly through the end of last summer. When I turned it on for the first time this spring, it was not blowing cold air. I called them for service. The technician said that the refrigerant had all leaked out. He refilled it, then said that I needed to wait a month before the leak can be located. (I now know that this isn’t true.) I asked if the next appointment would be automatically scheduled for me or did I need to call their office again? And he said “you need to call us.” A month later, I called and as soon as I said my name, the person said “oh sorry we haven’t scheduled your next appointment yet!” (doesn’t match what the technician said) “We’ve been so busy! But we expect to do your job Thursday or Friday of this week.” When I called again on that Friday, ”we’re still so busy! It won’t be this week.” I called again 1.5 weeks later, and was told “one of our techs has been out this week. We’ll get to your job next week!” I called again two weeks later, a different person answered the phone and said “the person you need to speak to can’t come to the phone right now. Can she call you back?” She didn’t, and that was a week ago. I’m using a lot of exclamation points because these people are very oily. I decided that if their reasons were legitimate, they wouldn't be handling it like this. I asked a second HVAC contractor for a consultation. I explained the whole situation, and he said that finding a leak in a 5 zone system could potentially be a very labor intensive job. His company would send a two-person crew ($250/hour) and it could take an entire day. About $2000. He speculated that BMC/Clower is trying to avoid having to do this job for free, as I am still under a 1 year warranty for their labor. In hindsight, before the installation, the owner said it would be done in two days. In reality it took three entire days. The crew worked diligently the whole time. The extra day didn’t seem like a big deal at the time, but now I wonder if the owner has a habit of scheduling unrealistic turnarounds. Which would mean the crews are always behind schedule, and working under time pressure. This would explain why they did a less than thorough job, and can’t find time for the all the problems they need to go back and fix. Right now, the AC still works. The leak is small enough that it will probably be next spring before I need it fixed. I’m going to budget $2000 so I can hire the other contractor to repair the leak. I wouldn’t trust BMC/Clower to do the repair now, even if they wanted to do it for free.

It went very well, I will continue to use them, the job and follow up is very responsive.

Description of Work
They did a maintenance checkup and leak inspection on our hvac unit.

The install team and maintenance team did an outstanding job. Our furnace is working so much better and more efficiently this fall and winter. The inspection team had found that our furnace had been installed poorly and had a problem with shutting off before heatlng our home completely which caused frequent cycling of the unit. The install team corrected the problems and the furnace now looks like a professional did the installation. All of the service reps explained each problem and the resolution clearly to me. They all worked very hard and were polite and professional. I will continue to have BMC Clower inspect and service my furnace and air conditioner due to their excellent service techs.

BMC Clower provided terrific service. First, their rep (the company founder) explained fully and clearly our options for installing a new heat pump. Second, this company, despite having the back-up of customers expected in late May, understood our urgent need for air conditioning and made time for the installation ahead of schedule. The installation itself was exceptionally smooth. The technicians were polite and quiet, and they left our house immaculate, inside and outside. The only indication that workers had been here was the cool air. Clower also handled the paperwork for our BGE rebate, which came quickly. Now, in the heat of July, we are doubly grateful for Clower's skill and efficiency.

Top to bottom I had a first rate experience with BMC. They gave me ideas on how and where to install the mini-split that others hadn’t, came back with a fair estimate, and did great work. They left the job site clean, and were great while they were in the house. Then after the fact they were incredibly responsive and helpful in helping me clean up some paperwork issues that were my own fault - I love when companies give that kind of service after they got paid, not just before. I highly recommend them.

They do great work. Saved me a lot of money by being straight forward about how to handle the problem. Highly recommend.

Description of Work
Installed a boiler system at my house as well as at rental property, also a sump pump

Outstanding experience. John, the owner, personally came to my home to evaluate my old system and recommend options for new equipment. John was the only owner out of 6 HVAC companies that did this. His knowledge and advice about what system I should consider was invaluable and authoritative. Being the owner meant John could quote me a price, negotiate the scope of work, and be confident his word was good. And it was. BMC Clower offered the best price and in my opinion highest quality. The entire team is stellar. Sarah in the office took care of all the details and made paperwork a breeze. Kevin, the install crew chief, was friendly and super professional. I couldn't ask for a better experience. Looking forward to many years of service with BMC Clower.

Three options with different efficiency and cost were provided and explained. The job was completed on time and effectively.

No, BMC Clower Heating & Air Conditioning Inc does not offer a senior discount.