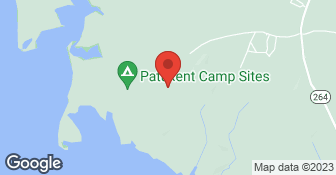 All Ready Finished Concrete and Masonry is a small, family owned business. Located in Calvert County, MD we serve the entire Calvert area as well as Anne Arundel and Howard Counties. We are a small company consisting of only 6 employees and the owner is present at every job. All work is done in-house, we do not use sub-contractors. This ensures top quality work which we guarantee your satisfaction. No job is too big or small for All Ready Finished. We are certified Cambridge Paver installers. We have put a lot of time and effort into creating ways to properly insulate concrete during the winter months in order to complete your job any time of the year. We always offer the best pricing, excellent customer service, and superior workmanship on each and every job we complete. Call us today for all of your concrete and masonry needs!...

At HS Sealcoating Paving Service LLC our belief is that our customers needs are the utmost importance. Our team with 11+ years experience is committed to meeting those needs. We welcome the opportunity to earn your trust and deliver you the best service. No job is to big or to small, please contact us for a free estimate!  …

I am on every one of my jobs. We hold the old time values of quality work and customer satisfaction. We only use quality products. After 25 years of experience in concrete and construction we became the Maryland distributor and stamp contractor trainer for Stampcrete products. We provide free estimates. We except cash, checks and major credit cards.  …

Loved dealing with this company. They were all very nice, professional and very prompt. I will definitely use this company again. They did a wonderful job and we are very satisfied. I can't say enough good things about them.

Description of Work
We had concrete poured in a 60'x40' pole barn.

The Homeowners Associations for my rental townhouse told me I needed to get my concrete steps replaced. All Ready Finished had done a good job on the next door neighbor's steps a year or so earlier, so I sent them an email on 8 Jul 2016, asking them for an estimate. On 11 Jul they sent an email, saying that they would take a look at the steps and asked for a day and time that worked for me. I responded back with some suggested times. On 25 Jul, I still hadn't heard back, so I emailed again, asking if they were still interested. On 27 Jul, a project manager contacted me by email. We exchanged a few emails and phone messages, trying to coordinate a meeting time until on 30 Jul, he called and said he could just stop by the townhouse on his own to measure and work up estimates. on 3 Aug I received a PDF proposal via email to replace the stoop, replace 6 steps and reset the handrails for $2980. I said that I'd accept the proposal. On 4 Aug All Ready Finished sent me an email with a link to DocuSign, where I digitally signed the contract. DocuSign sent me a PDF copy of the signed document. As directed by the contract, I mailed a check for 1/3 payment as a deposit. Sometime around 14/15 August, a representative of All Ready Finished phoned me and told me that work would start on 18 August, and told to tape a check for the next 1/3 payment on the door. On 19 August, my tenant phoned me to say that the work was done, and that All Ready Finished was waiting for the final check. I drove over with the check, and met the owner, who reviewed the work with me and pointed out a spot in the railing that needed welding.

company requested photos. Photos sent. He called back and said that he doesn't patch concrete porches. Normally, he removed the damaged porch and rebuild which cost about $3000. No further communication received.

Description of Work
no work done.

The job went very smoothly and was completed on time.

Description of Work
All Ready Finished was very punctual, provided quality work and the entire team was very polite and easy to work with.

They did the work at my mother's house. She said the owner and crew couldn't have been a nicer bunch and that she felt super-comfortable with them. The work was scheduled within two weeks of finalizing the contract and started the day we scheduled. Although it was a lot of work, they were completely finished the next day. It looks fantastic and the area was all cleaned up when they were done. The neighbors are already complimenting on the work and asking who did it because they may have some work for them. Couldn't be happier.

There are many companies that will attempt to work their magic to give you a beautiful driveway but All Ready Finished is the only company I trust. My vehicle now has a red carpet to drive on, if only it had stilettos. Nothing but the best for my driveway. Let me tell you about the crew- they showed up on time everyday, a very polite group of men. The only thing they ever asked for was a hair tie. The concrete was poured ever so perfectly, it looked like satin. If the Hoover Dam ever has to be redone, All Ready Finished should take on the job! Thanks!!

Description of Work
Poured the most perfect driveway for my lovely vehicle to rest on.

Better than we could have imagined. They are professional and courteous. Once they broke ground we feel like they were done before we could blink an eye. which is great because it needed to be done for a wedding, and it was!Thanks again to all of the all ready finished family.

Description of Work
First let me say that this is the second project all ready finished has done for us. This time they installed an in-ground concrete pool with a beautiful stamped concrete deck, complete with pool house, and wet bar. Once again, we want to thank the Owner Stephen, and the Project Manager Jarrod, for all of the great ideas and being so patient with us through the design process.

I had a wonderful experience with All Ready Finished Inc. I needed last minute repairs on a house I was selling and Stephan came through! He came right out for a estimate within an hour of me calling and the job was done the next morning! All work was done properly and efficiently for a good cost. I would highly recommend All Ready Finished to anyone looking for a reliable contractor.

Jared provided an estimate and then applied for all required permits. He kept us informed of progress and scheduled work. He did a great job. The owner Steve worked on the job and did a great job evening out and making sure all steps were the same. They were punctual and professional. They used extra barb wire to strengthen concrete. They used plywood to protect our lawn as wheelbarrows of concrete were moved. Cleanup was great - no mess. Rail looks great. Katie in office also did great follow up and kept us informed. Just a very positive experience. Would recommend All Ready Finished (did I mention they were fast?) for any concrete job.

We definitely got lucky with the contractors we hired. They did fantastic work. Plus, they were in and out. We love it.