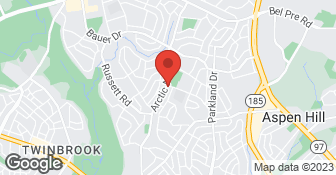 All Builders United Company was founded in 2005 by Julio Guzman as a general contractor. For over 6 years, All Builders United has earned an excellent reputation by providing its customers with honesty, quality, personal customer service, professional workmanship and competitive pricing on projects large and small....

Julio is tremendously patient and attentive. My wife and I must have called him four or five times to discuss and review our project goals. Each time he exercised tremendous patience, revising plans accordingly. When we finally decided to do the project, we did so at a time when we needed it done in just eight days. Julio didn't shy from the task and performed a tremendously professional job. I would recommend him broadly. He is fantastic.

Description of Work
Julio performed an entire renovation of our basement space. He redid all the dry-wall, the ceilings, the flooring and he built a shower and bathroom in a very confined space that came out beautifully.

I have never worked with a better contractor. Scheduling was efficient and tight. Once the work was started they worked straight through (6 days/week), which is something I value highly and hardly ever happens. The owner is intelligent, experienced, resourceful and a delight to work with. His crews are amazing: very hard working and they clean up their work sites every evening. Great care is taken to protect the home and any pets. We would definitely use them again. M.K. Miller

Description of Work
The provider came to us through our insurance company, for repairs following a water mishap that affected 3 floors of our home. The scope of work included demolition, plumbing, electrical, wall board, insulation, tiling, lighting and floor refinishing.

He first came in after I had water damage done to the house. He was my subcontractor with Jenkin's Restoration. He took the insurance quotes and made suggestions for either replacement or upgrade; all within the insurance budget. His workers were fantastic and the work is beautiful. They kept my two cats inside the whole time they were working; I really appreciated that. He is a lovely person to work with and I would hire him again for any and all home repairs.

Description of Work
He did drywall,painting,electrical, plumbing, refinished wood floors, installed new tile (on both floor and surround).

This was an insurance job, and as soon as Mr. Guzman was assigned the job, the experience was as pleasant and worry-free as possible. He came by to re-measure and be sure he had the right numbers and a full assessment of the job. Two days later, the crew arrived and work began. They started early in the morning and worked until dark every day. They were courteous at all times, and were careful and thorough. I would definitely call All Builders United (Julio Guzman) for other projects.

Description of Work
Vinyl siding - (replaced old aluminum siding) was installed on entire house, except brick walls. All old material was removed and taken away. Our Flip-Gutters were carefully removed and later re-installed so that all functioned as they are intended. Vinyl trim was installed around all windows and doors and along the top and bottom of each wall. Caulking with green caulk to match the new siding was done around windows and anyplace where water might get in. On completion, everything was completely cleaned up and trash carted away. Several days after completion, Mr. Guzman came by to go over everything and to be sure we were satisfied. All appointments were honored and the work was done to our satisfaction and within budget.

Our team at A&S Chimney Services LLC is made up of lead masons, chimney experts, and exterior remodeling specialists dedicated to serving our customers safeguard their property through a full scope of chimney cleaning, installation, rebuild, and repair solutions, along with gutter and dryer vent cleaning services. We work to ensure our valued customers can safely and fully enjoy their fireplaces by providing spot on cleaning and sweeping solutions, comprehensive chimney inspections, and repairs that stand the test of time. Lead by Gricelda and Antonio Coreas, who holds over 15+ years of experience in chimney construction, maintenance and restoration services. A&S Chimney Services LLC is one of few woman owned construction firms specializing in chimney services. We work with utmost care and regard for your home and project, to fulfill, and even go beyond, the quality of service and craftsmanship our customers expect. Licensed by the MHIC, insured, and bonded, A&S Chimney Services LLC has been serving residential communities all across Maryland, including in around Columbia, Gaithersburg, Germantown, and Rockville, for 18+ years. Maryland Home Improvement License MHIC No. 05- 145258  …

WATER, FIRE & MOLD Damage Restoration & Clean-up Services! When disaster strikes your home or business, you need an experienced professional company to restore your property back to pre-loss condition. We offer immediate disaster response and can work with your insurance company. Having a disaster happen can be a traumatic time in your life and we understand every aspect of this. Our goal is to not only restore your home or business properly but to also ease your mind. From the initial phone call until after we've completed the work, we promise you'll be completely satisfied. We urge you to take a few moments to read our reviews, learn about our services, and contact us with any questions you may have.  …

How is All Builders United overall rated?

All Builders United is currently rated 4.2 overall out of 5.

What payment options does All Builders United provide

No, All Builders United does not offer eco-friendly accreditations.

Does All Builders United offer a senior discount?

No, All Builders United does not offer a senior discount.

Are warranties offered by All Builders United?

No, All Builders United does not offer warranties.

What services does All Builders United offer?