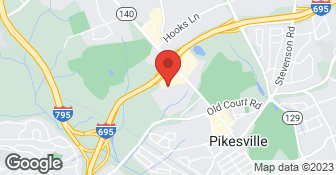 Mr. Rubin was able to come the same day and replaced the fan in my fridge. He is friendly and professional. I took away a star because I also have had an ongoing problem with a high-pitched noise coming from the fridge that's been very annoying. Unfortunately, probably due to his age, Mr. Rubin wasn't able to hear that sound even when standing next to the source. I hoped that, with the fan replacement, the problem will be fixed. It was not. Today the sound is even stronger, so either the new fan also has a whiny motor, or it's something else. It's very similar to a muted sound from a stuck key on a piano. I already paid $286 for the fan replacement and really don't want to spend hundreds more on another appt for an old fridge. However, this constant "stuck key" sound is driving me nuts, the issue was not resolved, so I give 4 stars for the visit even though Crest Appliance technically did nothing wrong - it's not the man's fault he can't hear higher pitches.

The original job complaint was that the refrigerator wasn’t cooling. Her evaporator fan was found to be completely non-functioning, The new fan motor resolved the issue period. I gave her the price before installation. No other contrary sounds were heard, apparently this sound was something she heard before her unit had failed. I suspect she may have ultra sensitive hearing, not sure. I’m sorry she wasn’t pleased and felt the need to give me such a scathing review! I don’t believe in my entire career I’ve had a more undeserved negative review than this.
5.0

Crest responded immediately and was able to come the very next day. My older unit required replacement of the mother board. The technician was well experienced and thoroughly described the nature of the problem and its repair. He contacted me in advance requesting the model number of the unit, the symptoms, and consequently had the necessary part on his truck when he arrived. He even followed up twice after the repair to make certain everything was still operating properly.

Description of Work
Refrigerator and freezer were totally inoperable.

Thank you for your kind review I’m glad things worked out well!
5.0

Mr.Crest was very professional, on time and he complied with covid precautions I requested such as mask wearing and entering house where dryer located. He was very clear on price and repair that was needed to fix the dryer. .I would definitely use this company if needed again.

Mr. Rubin responded to my call immediately and came out to my home the same day. He quickly and accurately diagnosed the problem and repaired it. He was professional, fast, and very helpful! I would highly recommend this company. Thank you, Mr. Rubin!

Description of Work
Heat in dryer was not working.

Excellent, prompt, efficient, and very reasonable. Some quotes I had would have been more reasonable to buy a new dryer.

Description of Work
Repair of a clothes dryer

I cannot speak to their repair work but I can speak to their honesty. The owner texted me early morning and called as I indicated my reapir was an emergency with a home full of children! He asked me questions and indicated our brand was not one he worked one. His complete honesty and information as to where to go for help is something rare in today's world where he did not receive any money, just spent 10-25 minutes advising and helping us. If you can use this company, certainly they take pride in what they do and very ethical.

Glad to help you, appreciate your kind review. Thank you very much
5.0

I'm sorry but I forgot the man's name so I will use "he." I called and he came the next day right at the time he said. He knew right away what was wrong--the dryer needed a new belt. It turned out to be a hard belt to replace and he had to work hard to make it work. He did make it work and now the dryer works fine. He also removed two bunches of lint that he saw that was making my dryer less efficient. He thought his cleaning may be enough for the dryer to be efficient. If it wasn't he told me what kind of tube to get since the one I had was out of date. However, the dryer is fine so I didn't get a new tube. I have used Crest Appliances before and have always been very satisfied with the service. I definitely would recommend the company.

The repair was done promptly and efficiently. The repairman "Gil" also retrieved money that had gotten into a part of the dryer and was making a lot of noise. The latter was a bonus! Much appreciated.

I woke up to full load in washer-NO POWER TO DRYER! Called Mr. Gilbert at 8:00 a.m. and he was here by 10:15 as promised. He was able to fix the electrical switch in my dryer right away. While my washer was functional, it needed a part so it would agitate properly and balance better. Mr. Gilbert was able to fix that too and was VERY reasonable in price, professional and prompt. Thank you for saving me a lot of trouble. Will pass on advice from former repairman no longer with us. If you have functional appliances, keep them. Fancy newfangled appliances tend to be hard to maintain and have $$electrical problems$. My appliances are not smart, nor am I. Thanks to Mr. Gilbert, we can live in function and harmony for years to come!

We are not a global, national franchise or a remote out of state contractor with no local ties. We are a homegrown, local minority owned company committed to customer satisfaction. Founded in 1992, our company has performed over 100,000 service calls, and have over 30 years of experience. Insured, licensed and bonded we provide perfect service delivery to every customer, every time. We are a two time "Best Of Baltimore" winner. We are an Angie's List Super Service Award Winner 2011-2020. We service Anne Arundel, Baltimore, Carroll, Cecil , Harford, Howard counties, Baltimore city and southern Pennsylvania.  …

We really care about our customers! Everyone at Landers Appliance is committed to providing you with Honest, Reasonable and Reliable service in everything we do! We train our team to strive for excellence, performing to the highest professional standards. And if we ever fail to deliver on these promises, we’ll apologize and do our best to make it right. We have been in business over 35 years. We have 22 FT, and 2 PT employees. No sub contractors. Manufacturer trained professional technicians with "Master Technician" Certification. We charge a flat, fixed service charge and job rate. No travel charges. We are an independently owned service company headquartered in Maryland, owned and operated by Dean Landers.  …

No License Required for Trade
Bonded
Insured
All statements concerning insurance, licenses, and bonds are informational only, and are self-reported. Since insurance, licenses and bonds can expire and can be cancelled, homeowners should always check such information for themselves.To find more licensing information for your state, visit our Find Licensing Requirements page.
General Information
Free Estimates
No
Eco-Friendly Accreditations
No
Payment Options
Check, Visa, MasterCard, American Express, Discover
Warranties
Yes

Award winning, including 2014 SUPER SERVICE AWARD WINNER. FAMILY OWNED & OPERATED.Large appliance repair, washers, dryers, refrigerators, freezers, stoves, ovens, disposers, ice makers & gas appliances. Please note some of the services not offered such as: Small appliances. Stack Units and most foreign units are not serviced. No Microwave Service. We do not sell parts privately. We do not sell or buy old appliances. We do not do installations.

We do not service stack units, Samsung,LG, or microwaves. We do not sell parts or do installations .

Crest Appliance Repair is currently rated 5 overall out of 5.

No, Crest Appliance Repair does not offer free project estimates.

No, Crest Appliance Repair does not offer eco-friendly accreditations.

Crest Appliance Repair offers the following services: Award winning, including 2014 SUPER SERVICE AWARD WINNER. FAMILY OWNED & OPERATED.Large appliance repair, washers, dryers, refrigerators, freezers, stoves, ovens, disposers, ice makers & gas appliances. Please note some of the services not offered such as: Small appliances. Stack Units and most foreign units are not serviced. No Microwave Service. We do not sell parts privately. We do not sell or buy old appliances. We do not do installations.

Are there any services Crest Appliance Repair does not offer?

We do not service stack units, Samsung,LG, or microwaves. We do not sell parts or do installations .