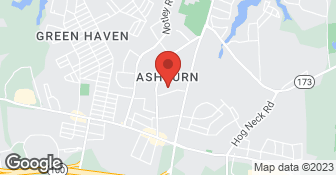 They were great to work with, showed up early, worked hard all day, and were very polite. I heartily recommend them.

Description of Work
Anne Arundel Plumbing was one of three businesses that gave us quotes for replacing the incoming water pipes from under the sidewalk into our basement. All of the quotes were within a couple hundred dollars of each other, but the deciding factor for us in choosing this company was the recommendation that another trusted provider gave Anne Arundel Plumbing, and the fact that unlike the other companies, they gave us a 10-year warranty. The other companies' warranties were only 1 year and 5 years.

After a kitchen remodel our contractors plumber stood us up for the third time. Our neighbor recommended Arundel Plumbing. It was early on Christmas eve morning when I called and the owner said he would rearrange the days schedule and send his son right over. His son arrived 1 hour later was professional, friendly and did very nice work. Thanks to Arundel Plumbing we were able to have a nice Christmas dinner in our new kitchen and were able to wash the dishes in the kitchen instead of the bathroom sink. These are definitely my go to plumbers.

It went very good. We had a previous company come out and they were going to over charge us. Anne Arundel came when they said they would, fixed the problem, and we have not had an issue since

Description of Work
They fixed our furnace - Gas valve replacment

They showed up quickly and got the job done in a professional manner. They only performed what was needed and did not try to upgrade to a more expensive option. Everything was cleaned up to our satisfaction before they presented a bill. I only wish they accepted payment by credit card, but will still use them anytime we need plumbing work done.

Description of Work
We have used Jeff and his son several times in the past. The latest service was to replace a leaky bathroom faucet.

Their prices are reasonable and they are very quick. When my toilets were all blocked, they came right away and did not charge me extra for the emergency service. They just took care of me. I would use them again.

Description of Work
I hired Anne Arundel to repair my toilets.

Here's the kicker...When I paid Anne Arundel Plumbing. I aked what is your hourly rate. Jeff, the owner stated $85 per hour, but because this was short notice I was charged $120 per hour. At the time, I accpeted that.A month later I have the same problem he supposedly fixed. In the interum, the work was filed for a claim using our home owner's insurance. The insurance company stated they needed to talk to the plumber to move forward with our claim. About 10 calls were made to Jeff from Anne Arundel Plumbing requesting him to call us regarding this matter. He never responded. Jeff advised me I should report this to my insurance company. My conclusion for his non-repsonsiveness is he's not licensed to work in the City of Baltimore.He is licensed in Anne Arundel County.Overall, Anne Arundel Plumbing is a dud of a plumber. Because of his actions he cost me more money and I can't move forward with my insurance claim.

Description of Work
The owner did some work on a rental property I manage in Baltimore. (It was an emergency plumbing job) Sewage water had backed up into a basement bedroom. The plumber patched a hole in a sewage pipe and a month later the smell of raw sewage came back. I called another plumber who investigated further and found a leak further down into the pipe, which he advised, that Anne Arundel PLumbing should have found. He said Anne Arundel Plumbing did a "band-aid" job and over charged me.

ANNE ARUNDEL PLUMBING WAS VERY RESPONSIVE TO MY PHONE CALL REQUESTING SERVICE. THEY WERE VERY PROMPT IN KEEPING THEIR SCHEDULE AND PERFORMED THE WORK IN A PROFESSIONAL MANNER THAT I WOULD HIGHLY RECOMMEND.

Description of Work
ANNE ARUNDEL PLUMBING REPLACED A LEAKY TOILET IN MY POWDER ROOM BATHROOM. THEY REMOVED AND TOOK AWAY THE OLD TOILET AND INSTALLED ANOTHER TOILET THAT I PROVIDED.

Alpha Plumbing has been serving the Baltimore, Howard and Anne Arundel County areas since 1991 - more than 25 years! We handle residential services of all kinds from Bathrooms to Kitchens, No job is too large or too small. We can install any new fixtures that we provide or one that you have purchased. We will ensure a safe, properly functioning fixture with a pleasing new look. We can take care of all your needs. Just check out the list of our complete services below. We are happy to help our residential and commercial plumbing customers. Call today!  …

Insured
All statements concerning insurance, licenses, and bonds are informational only, and are self-reported. Since insurance, licenses and bonds can expire and can be cancelled, homeowners should always check such information for themselves.To find more licensing information for your state, visit our Find Licensing Requirements page.
General Information
Free Estimates
No
Eco-Friendly Accreditations
No
Payment Options
Check, Visa, MasterCard
Warranties
Ask for details

ANNE ARUNDEL PLUMBING is currently rated 4.6 overall out of 5.

No, ANNE ARUNDEL PLUMBING does not offer free project estimates.

No, ANNE ARUNDEL PLUMBING does not offer eco-friendly accreditations.

No, ANNE ARUNDEL PLUMBING does not offer warranties.