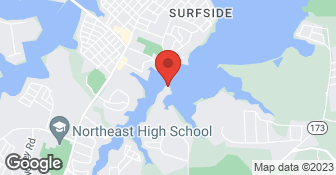 Michael & Son is family owned & operated and has been servicing the Virginia, Maryland and Washington DC area for over 30 years. We take great pride in providing our customers with the highest quality plumbing services. Our professional and courteous staff are here to help you with whatever projects you need to get done.  …

The company installed. At installed they weighted the tanks down with water which caused us to very quickly after installation have the tanks serviced and pay for all of the water they had in the tank. Less the 4 months since installation and the tanks are taking in a tremendous amount of rain water due to the tops not being secured accurately. There was problems with electrical, the tanks were full and no alarm which caused back up in the restroom. We called the office 4/5 times, left messages, no answer. They said they would come but never did and never returned our calls. I will continue to use social media so that everyone in the neighborhood knows what happened to us.

Description of Work
Tommy was to provide a site plan for a new septic system. Took him about a year to complete first draft. Was submitted to the county and kicked back with 4 changes after many phone calls and a complaint to the BBB I still have not received a completed ate plan and it will be 2 years in a couple of months.

I first contacted this company two weeks ago to look at the pipe near my septic tank that had been crushed by someone mowing my lawn. I was told I would get a call back after they came out to survey the area. After several days I received no call back, and called them again. Apparently they had misplaced my work order OR it was with the owner who was out working in my area. She didn't really know, so she wrote another work order. I, again, was promise a return call with a report on my issue and that they'd be out over the weekend to look at my problem. A week went by and no one showed up, so I called again and had to leave a message for them to call me back. They never called back, so I called again on the "approx. service date" listed above and was again told that my work order was somewhere, he was in the area and would call me back with a report that afternoon. I still haven't heard from them. We will not be a repeat customer. I'm disappointed by the lack of feedback and returned calls promised to me. Customer care is definitely NOT their priority.

Description of Work
I did not receive any services because he never showed up.

The company arrived when they said they would. They took about 20 minutes to complete the job. The pumping had not been done recently, and i was told that I should watch carefully to make sure there were no problems that could result as a consequence.

THEY COME WHEN CALLED, DO THE WORK AND BILL ME LATER.

Description of Work
I USE THIS COMPANY TO CLEAN THE SEPTIC TANK ON A REGULAR BASIS.