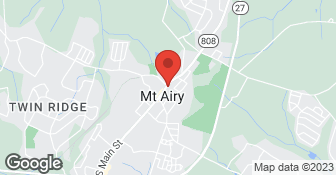 Thank you for choosing Smithstonian Contracting, LLC. Veteran owned and operated. With over 45 years of experience, we can take care of all of your general contracting needs. We take pride in our work, making sure the job is clean and done to perfection. We look forward to working together to make your dream project a reality.  …

David H. Martin Excavating, Inc. is a family-owned company that started out in 1968 with one man, a dump truck, and a backhoe. Today we have more than 200 employees, a large fleet of dump trucks and a vast assortment of excavation equipment to take care of all your excavation needs. Let us help you with your next project!  …

Give us a call you'll like our prices !! We are a family owned and operated business, offering expert service for 31 years. I personally supervise, as owner of this company all projects, for example: water and sewer line replacement, sewer and drain cleaning, hydro jet and cast iron pipe descaling and pipe bursting excavation. We take pride in turning a very unpleasant experience into a satisfying outcome. free estimates  …

They have been very good and I am pleased with them.

Description of Work
They did plumbing work.

We switched over to WRF & Son's plumbing shortly after BGE Home bought out Van Sant Plumbing and Heating. WRF & Son's is a local company and our preference is to patronize local businesses. We've used them several times since making the switch and their plumbers are punctual, professional courteous and the workmanship is excellent.

It went very well, they were careful and cleaned up afterwards.

Description of Work
Replaced new bathroom fixtures that we had already purchased.

I purchased the neutralizer through the Plummery store in Mount Airy and W.R.F and sons installed it (the Pummary store is located below W.R.F's office). They also supplied and installed the laundry sink and faucets. (they purchased it from the Plummery and brought it with them). They arrived on schedule and performed the work in approx 2 hours. The installations went well. They were very professional.

Dug up entire front (newly landscaped) front yard to repair water main break. Hit power line (even though it was marked by utility company)- had to dig up more yard to repair power (all neighbors were out of power). Stated they had to go through our foundation wall for water main repair. Basement has been leaking ever since. Never before had wet basement problems. Leak is at the exact site where they went through foundation wall. Called 3 timers last year to have them repair leak & seal their work. Leaking again 8/2015 - called & was told I'm out of warranty for an ongoing problem due to their poor installation and lack of proper sealant. Also told it would be at least a month or so to get an appointment!?? TERRIBLE

This is the second time I have used this company and I am very impressed with their responsiveness and quick service. Last time was for a backup in the bathroom and this time we .woke up to no water. We called and they came very quickly determined the problem and fixed it with no wasted time. I was very pleased with their professional manner and ability to diagnose the problem. They were also very patient and explained to me what they were doing since a well pumping system and the attached filters are all new to me. I recommend them very highly.

We had a pipe burst at around 7pm in near zero temps. I contacted WRF and Son's emergency line. 5 minutes later they called back and said they could be here by 9:30, and that emergency rates were in effect, which basically meant time and half + travel time. This had me a little concerned, but we were without water, and no one else could even come. The dispatcher communications were excellent and she kept me informed as to their ETA, which was now 9:00. They showed up 15 minutes early, immediately diagnosed the issue. They cut out the bad pipe and amazingly were finished 25 minutes after they showed up at my door. They then took the time to discuss the issue with us, what lead to the freezing, and the steps we could take to avoid this in the future. Incredibly, with a 2 hour turn around, with emergency rates, and 40 minutes of travel charges, the total cost was just under $200.00, about half of what we expected it to be. I will definitely be using WRF and Sons in the future!

The provider re-routed the kitchen sink pipes so that the drain and trap would meet up. He also corrected some of the previous work, making the faucet more stable. He came prepared with the parts that he need and cleaned up after himself. I was pleased with the quick response.

Description of Work
When my handyman could not tie my new sink drain to the existing plumbing, the provider responded immediately.

I have been using them for almost 14 years now. A couple of times I've used another plumbing service, and while the other sevices were good they were never as comprehensive as WRF. The people you call are great, they call you before the plumbers get to your house and are upfront about cost. The workers are fantastic, very professional, willing to explain exactly what they are doing and why. I have absolutely no complaints or quibbles.

Description of Work
They replaced a holding tank for my well and cleaned out my water system. A very big job.

They responded very quickly and did the work on the a Sunday, working into the night to get it finished so I'd have water as quickly as possible. The owner and his daughter did the work. I paid extra for the Sunday service, but that's reasonable. This is a messy job but it went well.