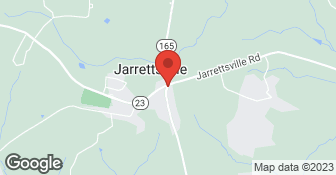 Chavis Enterprises was easy to work with and their prices was reasonable. They included a return visit to fill in the areas that subsided and recover the lawn with grass. After eight months, everything is working fine.

Description of Work
The septic was failing due to age, and we needed to replace it.

Provided the most detailed proposal. Very professional and courteous. Did excellent work and followed up to assure our satisfaction.

Called for a slow drain. They arrived same day, pumped the tank, and reviewed the condition of my septic system. They gave honest advice and options. Had a great experience with this company. Will definitely use in the future!

I wouldn't hesitate to recommend this company. After being told by RotoRooter that I needed a new sewer line immediately because of a broken line (it wasn't) and quoted an exorbitant amount, I called A&D to have my scheduled septic clean out canceled. Ryan offered to come take a look and give me an estimate. Not only was his quote substantially lower, they worked me in the same day. The crew was super nice and did a great job. I am so grateful for their professional service.

I called Chavis Septic Systems when my plumber told me a had a bigger problem then a plugged line. Which I had once before. I called Chavis towards the end of the day, they would come out and take a look. Jeff came out and emptied the septic and discovered the bigger problem. He explained in depth how the entire system worked, as this was my first septic system. He was very nice and polite and took all the time that was needed to explain. He gave me a card with the phone number for his brother Ryan Frick. I immediately called, close or maybe after 5 p.m., he said Jeff had explained the issue and he could meet with me whenever I was available to discuss what needed to be done. I believe Ryan came out the next day, and discussed in depth what needed to be done. He had already been to the town to look over where the drainage field had to be and the depth, length, etc. I told him let's move forward with it. I mailed in the deposit and was scheduled for the next week. It would be a three day project. They came over Monday, first they emptied my tank and anything in the drywells. Construction started on the Monday and they put in full days work. I had an issue with the Fios wire (I was also having some landscaping done, and the landscapers cut theFIOS wire. Verizon came out to fix the connection, they installed a new line, but it was not buried. I had brought this to their attention, as I did not want this line cut again. They really looked out for that cable, when I would check to see how work was coming along, the wire was out of their way. I really appreciated the care they displayed. Tuesday, they came back and put in another full day. Wednesday, was the last day, so they had to put my yard back together. They graded the yard better then before. Ryan came out the next day and explained where everything was and how it worked. These guys were the best and I really appreciated all the communication I received in reference to this project and the overall understanding of how it worked.

Description of Work
Emptied my septic, and found the problem. My dry well was bad. Needed to reconstruct an entire drainage field.

Representative was prompt and knowledgeable.

A septic backup can cause much anxiety. Chavis responded the day of my initial call and pumped out the septic tank. They performed the necessary repairs with excavation and without having to replace the entire drainage field. They replaced the corroded and rusted materials that was causing blockage. Service was prompt and curtious. Explanations and estimates were provided. The cost was reasonable. Most highly recommended. Mike Hamblin

I was very impressed with Chavis from the time they came out to do an estimate. Our septic system had overflowed and after we had the pipe initially cleaned out, we acquired estimates from 3 providers to replace the old pipe. Chavis' estimate was not the lowest, but their estimate was quite reasonable and they were the most thorough in researching the problem before they gave an estimate. They were friendly, competent, and easy to contact when I needed them. In fact, though they were scheduled to work on a Thursday, we had a second (unexpected) septic backup into our basement on the previous Sunday evening. I called Chavis and they answered the phone immediately when I called and were there the next morning to do the work, thus saving me the cost of a Roto Rooter bill. The owner Josh Chavis was actually the person who answered the phone on a Sunday night and came out himself the next morning to help do the work. I would highly recommend Chavis to anyone who needs septic work.

Description of Work
Replaced an old septic pipe with PVC, from house to septic tank, approximately 50 feet. Relocated the cleanout closer to the house and situated the pipe (angled) so septic materials would flow more easily to the tank. Removed concrete sidewalk slab while working and replaced slab after finishing.

Description of Work
I called Sunday evening. A live person answered They came out and pumped the tank right away!. They followed up the next day to repair the broken pipe on the outlet that was causing the problem.

***Endless Spring Water Gardens & Landscaping is Bel Air's BEST! And we are excited to now offer Pollinator Garden Installation*** Hi! I'm Pat and I've worked as a landscaper for over a decade. I'm here to take my skillset and use it to make your dream yard a reality. No job is too big or too small. If you can dream it, we can do it! Our Specialty Services include: Hydro Seeding, Drainage Solutions, Grading, Fountain/Waterfall Installation, Pond Design & Installation, Patio's and Retaining Walls. Please contact us TODAY for a FREE quote!  …

No job to big or too small call us to get a free estimate we will be glad to help you in anyway we can.  …

Stop Leak, a division of Foundation Restoration Specialists, Inc. We are ready to evaluate your basement waterproofing needs, as well as your concrete issues. We can protect your basement! Our business philosophy is based on integrity, promptness, knowledge, customer service, and customer satisfaction. We offer 70+ years of combined construction experience to solve your waterproofing and concrete needs. Our primary role is to provide waterproofing as a specialty contractor. We provide installation of pressure relief systems, sump pumps, pits, and battery back-up pumps. We also perform concrete crack repairs in foundation walls. We are recipients of the Angie's List Super Service Award.  …

Chavis Enterprises LLC is currently rated 5 overall out of 5.

No, Chavis Enterprises LLC does not offer a senior discount.

No, Chavis Enterprises LLC does not offer warranties.