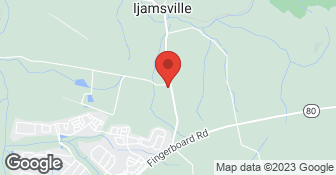 Since 1989, As You Like It Landscaping, an award winning residential landscape design, build and maintenance company has been creating unique designs for outdoor living. We service the Washington metro area with landscape projects that include pavers, retaining walls, walks & patios, outdoor kitchens and water features. Our goal is to ensure that your project and services are As You Like It

Tried getting this company to do updated landscape lighting, mulching and repair to paver patio and walkway. Greg seemed to be interested in taking on this work but after several emails and calls to him and the company I still have haven't received a quote. I was told that Mr Aronson is so good that he wants to do it right the first time. It’s been several weeks since the initial meeting. I've found a responsive company that is starting next week. If you don't want a job just say so. Won't use As You Like It for future projects

Description of Work
Quote for landscape lighting, mulching and repair to paver patio and walkway

They took over for my previous landscaping company and I decided to give them a shot. I have been pleased with their services so far. I did shop around for prices when I started with them and they were lower than most of the competitors. They have been pretty good about responding to me. I plan to continue with them in the future.

Description of Work
As You Like It Landscaping does my landscaping work. They did some design work in the early summer and they most recently came out to aerate my lawn. I have been using them for the past nine months.

They are reliable and handy. I think they give great service. I will continue to use them in the future.

Description of Work
They do fertilizing and weed-killing treatments for us.

Description of Work
I was switched to this company by my old landscape maintenance provider. These people were terrible. They were contracted to do lawn and bed maintenance for the season. They were supposed to mulch the beds at 2-3" of mulch. They put down only 1/8-3/4" of mulch. When I complained they took 5 weeks to respond, then didn't do anything. When I asked for a refund, they didn't reply. I'm having to institute suit to get my money back.

They were professional, responsive and punctual. They also cleaned up once the job was done. The quality of their work was very good and I was satisfied with their service.

Description of Work
They did the landscaping for me.

The following services were performed in 2008 for an approximate cost of $20,000: (1)Hardscape, new wall; patio extension: Excellent job and installation. Compliments received from neighbors. Needed $450 more to finish the job than quoted, due to intrusion by tree root (which was probably reasonable). Overall grade of A- (due to upcharge). (2)Irrigation: final system works, but delayed installation due to company's failure to build in plumbing expense, despite initial assurance of "all in" quote. Poor installation and maintenance service along the way. Overall grade of C. (3)Landscaping: very good job on side yard, mediocre job on rear yard, adequate but not outstanding job on front yard. Some of owner's instructions ignored. Poor follow-through likely affected by multiple staffing changes over the course of 2008-- no continuity and poor communication between design and installation staff. Problems with landscaping include the following: some plants haven't "taken" and company not proactive or responsive on replacement, despite replacement guarantee. Requested evergreen plantings-- many plants installed were not evergreen; design needs revision to be sufficiently attractive during winter. Some plantings installed over owner's objection. Owner requested that original ground cover be retained; about half was removed (leaving yard looking barren during winter). Firm installed small fountain-- and never provided operating instructions, despite owner's repeated requests. Some of the problems due to poor job on installation; other problems due to failure of communication between designer and installation team. Overall grade C, mostly due to unsatisfactory installation and poor follow-up. (4)Outdoor lighting: half of front yard lighting failed within a couple of months of installation (although system works in side yard and in rear yard). Company insisted that front yard problem was due to storm damage (which owner doubted). Company eventually replaced faulty lighting-- same failure re-occurred within days of replacement. Grade: C- due to failure to repair part of system that wasn't working. Overall grade: C. Excellent job on hardscape: would use firm again for hardscape. Would not use firm for irrigation, lighting, landscaping due to installation problems, lack of responsiveness, staff turnover. Other comments: owner was allegedly aware of problems, but did not appear to be proactive or concerned about correction.

They are very customer service oriented. I think they give good estimates on their time and what the total cost will be. They show up on time. I think they do good design work. I will absolutely continue to use them in the future.

Description of Work
They have done some landscape design and a stone walkway and steps in my front yard. They also do our snow removal in the winter as needed.

Metro Drainage Pros is a licensed & insured company that specializes in exterior storm water management and drainage issues. At Metro Drainage Pro's, LLP, we offer a team of highly trained professionals who all have a vast amount of experience in storm water management. We are a fully licensed and insured company, and we strive to bring our customers the best possible solutions, tailored to fit their needs. There is no job that is too big or complicated, and with over 30 years of extensive experience, our professional trained employees are fully capable of handling the most demanding of projects. So don't let your drainage get you any longer. Let the Metro Drainage Pro's, LLP team identify the source of the problem so we can provide you with long lasting results.  …

We are a local small family owned business. We offer high quality, personal and unique services. Since 1988, Roger Cooley's passion and details for his craftsmanship has built countless creations for his customers. Roger is very hands on and will see every project from beginning to end. Black Rock Stone Company offers Historic Restoration, Walks, Patios, Retaining walls, Fire Pits, Water falls, Columns, House fronts, Wood Ties, French drains, Grading, Hauling, Bob cat work, and Light Excavation landscapes. We offer free estimates and do New and Repair work no job is too small or too big.  …

American Lawn and Tree Specialists, Inc. is a locally owned & operated company committed to providing the very best lawn care and ornamental tree/shrub care service to its customers. With over 27 years of experience, we offer free estimates where we can come out and evaluate your lawn and landscape. This is our basis so that we may provide you the service your lawn and landscape needs. Our Organic Based Lawn Care Program is proven in getting your lawn to its potential. Contact us today so we can get started improving your lawn.  …

All aspects of Landscaping to include Maintenance, Lighting, Patios, Decks, Walkways, Fencing, Drainage & much more!

Frequently Asked Questions & Answers about As You Like It Landscaping

How is As You Like It Landscaping overall rated?

As You Like It Landscaping is currently rated 3.7 overall out of 5.

What days are As You Like It Landscaping open?

What payment options does As You Like It Landscaping provide

As You Like It Landscaping accepts the following forms of payment: Check, Visa, MasterCard, Discover

Does As You Like It Landscaping offer free estimates?

Yes, As You Like It Landscaping offers free project estimates.

Does As You Like It Landscaping offer eco-friendly accreditations?

Yes, As You Like It Landscaping offers eco-friendly accreditations.

Does As You Like It Landscaping offer a senior discount?

No, As You Like It Landscaping does not offer a senior discount.

Are warranties offered by As You Like It Landscaping?

No, As You Like It Landscaping does not offer warranties.

What services does As You Like It Landscaping offer?

As You Like It Landscaping offers the following services: All aspects of Landscaping to include Maintenance, Lighting, Patios, Decks, Walkways, Fencing, Drainage & much more!