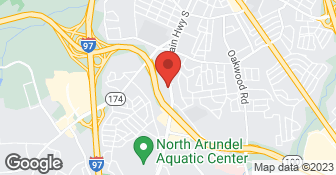 We currently manage over 500 properties in the Baltimore metropolitan area, we currently have 10 full time office employees, 12 full time maintenance men, 5 contracting crews, 2 plumbers, 2 electricians, we are a full service company or offer a la carte service, we can just fix your toilet or rebuild your house from the ground up. We offer 24 hour emergency service, 410-760-7368 ext-118....

Kelly Property Management of Anne Arundel County, LLC. A Better Way to Rent Real Estate! One-stop real estate website for all your Residential Property Management needs. If you will be vacating your home and just curious what your options are or have an investment home please give me a call to review how my services my fit your needs. Looking forward to earning your business.  …

Not at all well. I had to wait a day for my paycheck to clear and I was completely yelled at for slicing off one little sliver of lasagna out of this massive pan. The place is absolutely vulgar and vile. I had to take pictures of their properties inside and out and I would NEVER allow my worst enemy to step foot in one of those places...much less live there. It was absolutely disgusting and I have no idea what standards, if any, they use to fumigate their locations and/or use rodent and bug control, post occupant exiting. Lord knows what you will get if you take over at some of the places I had to photograph. Yuk. STAY AWAY FROM THIS PLACE AT ALL COSTS...

Description of Work
I worked here and the owner is a misogynist, crude, vile, bully, jerk. The language and disrespect he used is worst than any XXX film produced. I wish this forum would allow me to paraphrase because he should never be allowed to [sic} have employees. I expressed these views on their Facebook page and in pure Chad Lane fashion, he used his bully tactics to denigrate me and used the term A**CLOWN rather than address the facts...like a class action lawsuit that they settled...or the bouncing of employee paychecks...or his vulgar language that he thought ok to use in the workplace.

We signed a contract with Dunne Wright for property management services for our rental property on 06/02/14. Since that time, Dunne Wright has violated the terms of the contract, made mistakes that delayed tenant placement, placed unauthorized charges on our account, and behaved unprofessionally by regularly ignoring email messages and phone calls from us for information and questions about our statement, rental receipts, and condition of the property. As of today, 11/09/14, we have not received a check for any rental income from Dunne Wright. Dunne Wright identified a tenant on 06/23/14. The tenant was receiving assistance from Section 8, requiring an application with the appropriate government agency. The agency then reviews the application, inspects the property, and approves the application. This can take a few weeks. Dunne Wright used the wrong form, delaying the application process. The tenant actually moved in on 08/19/14. This is 8 weeks from acceptance of the tenant?s application. This resulted in a loss of at least one month?s rental income. Our property is located in Baltimore County where a rental license is required. Throughout the Section 8 application process, we sent multiple email messages to Dunne Wright reminding them that our rental license needed to be renewed. Dunne Wright ended up sending a courier to pick up the license on the day of the Section 8 inspection, charging our account $50 for the courier service. During the Section 8 inspection, a ceiling fan had to be replaced. Dunne Wright replaced the fan and charged our account $495 without contacting us for authorization. Our contract clearly states that any repair over $200 must be approved by us. We were not even aware of this issue until we received our monthly statement. The receipt of the statement with the charges stated above is when the real frustration with Dunne Wright began. We sent an email message on 10/02/14 requesting an explanation of the charges and other irregularities on the statement. We received a reply with an explanation of some of the irregularities which were due to the Section 8 placement. The unauthorized charges remained unaddressed. On 10/08/14, we sent a follow-up message requesting a credit for the unauthorized charges. Six days later we received an email reply from Chad Lane (owner) that he was looking into this issue. A further six days later, we still had no response and reached out again. When we contacted Chad on the phone on 10/20/14, Chad claimed that he had already replied to our message. When we asked to resend the message, he was unable to do so, claiming that for some unknown reason it was in his Drafts folder. We asked that Chad send us a written response, which he did which did not resolve the situation. We responded the following day, 10/21/14, and have not heard from Chad or anyone at Dunne Wright since then (13 business days), despite multiple emails (every two or three days) requesting the courtesy of a response.

I have worked with Chad and the Dunne Wright team for 7 years now. Before I found them, I worked with a number of property managers who just didn't cut the mustard. They have done a great job for me on the whole. Have there been hiccups along the way? Yes, but I have to say that every time I have raised an issue or a concern about something, it has been immediately addressed and remedied without any BS. Chad is one of those rare individuals that I would let hold my checkbook to use just what he needs to take care of my properties. He has that much integrity. I can't recommend D&W enough.

Description of Work
I have worked with Dunne Wright on a variety of projects from property management of my rentals to full gut rehabs of properties (we own 22 units) over the past 7 years. Services they have provided include: 1. gut rehab 2. property management 3. basement waterproofing 4. hvac repair and replacement 5. plumbing repair 6. roof replacement and repair 7. carpet replacement 8. tiling 9. drywall installation and repair 10. painting 11. rebuilding a concrete walkway.

Description of Work
Chad and team got right on an issue I had with a slow/no pay tenant and results were successful. I feel confident with this management company that they will represent me well for my property.

Thank you! We look forward to a great relationship! Chad Lane
1.0

Very disappointed with response on problems. Mold developed in the basement of the house that we used as a bedroom after the room had flooded. The basement had flooded twice and seemed to appear much faster after the second flood. We made many calls first of all because the room was not being put back together after the water had been removed and old padding thrown away. The room was dried and new carpet padding and old carpet were restored to the floor. Mold still growing. We made many attempts to contact the property manager but he ignored every phone call. It wasn't until we finally made contact with the home owner that the manager appeared at the door. A mere 29 days after he had been notified of the mold. In the meantime, we made arrangements to have a mold remediation specialists come to the house to take samples and give his opinion on the situation. Samples were submitted to an independent lab but the cost submitted to us to have the mold removed from the basement is nearly $6,000.00. That total does not include replacing drywall, carpet, etc, just to have the basement cleaned of the mold and mildew. Ironically, one of the items that Dunne Wright lists as their forte on their website is Mold Remediation Specialist. You would think that they would have been a little more anxious to check out the problem. We have two small children (ages one and two) in the house and the oldest developed an allergy. When we remove him from the house, it clears up, bring him in and he starts again with the raspy throat and coughing.

Description of Work
We rented through this company and would never recommend them anyone. There were undone small and large repairs that were never done from the time we moved in. Eventually there was a major problem and we contacted the company and our calls were ignored totally. Even had to send an email outlining details of the problem to them but it went unanswered also. It was only after we had someone get in touch with the home owner that we heard anything back from them. I only pray that they make the repair correctly to the issues we had with the house. Renters health could be at risk if not.

Tenant did not disclose that tenant had abandoned the leased premises and landlord had filed suit for rent and resulting damages
4.0

They are very nice people, and I like supporting small businesses. They found a tenant for me relatively quickly. My other feedback is that we reviewed alot of things over the phone, and when it came time to actual pay fees, I had to remind them of our original agreement. I'd use them again, but will insist on having everything outlined in writing before they start searching for a tenant.

Description of Work
Serving as property management for a house in Maryland.

All seemed well with getting the house rented, but then everything went wrong. They wouldn't take my calls or return them. They wouldn't send me statements financial statements without beginning a lawsuit process and then those statements included charges that I have had to dispute. The marketing is also not consistent with the contract. The marketing contends that they are focused on collecting rent and go to great ends to do this, however the contract explicitly states that the landlord is responsible for all legal action or collection of underpaid rents. Basically the only two services they provide are getting the house filled with a warm body (which they did well, albeit with an individual who has never not been late) and keeping records of payments, which they also do well, but you may have to pull teeth to see them.

The workmanship was excellent on the whole. Crews were punctual and the work was accomplished on time and on budget. The only difficulties we have had with this is that it is sometimes difficult to get a response and schedule a visit. For example, it takes several phone calls or e-mails to get a response; we have been trying to get an estimate for a third job for several weeks now and have not yet been successful. As a warning, they did the drainage system without a contract! We had made a verbal agreement, and came home from work one day, and they had repaired it! They said that they trusted us, which is why they did the work without a contract. However, this is unprofessional, as the contract is needed to protect BOTH parties! So, in future work we made sure to request the contract up front.

The members are excellent customers and yes we must admit that we have had issues with getting right back to them due only to that we have been a little overwhelmed with the amount of business we have been receiving in a usally slow time. We attribute alot of this business from Angie's List! We have put measures into place to help eliminate this problem in the future. The reason that we did not do a contract with The members were because they were referred through a realtor that we have known for over 20 years, but we do agree with the member about contracts.
5.0

They give accurate rehab budgets and stay within that budget. They complete the work quickly. They are very professional to work with. We would recommend them for property management and any remodeling job.

Description of Work
They have remodeled two properties ($20,000 and $30,000) for us and manage two separate properties for us.