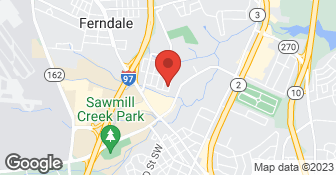 Family business of 35 yrs. We do most of our work. We have sub-contractors that we have worked with for many years. Our billing procedure varies according to the job. We accept Major Credit Cards....

Remodeling Wizards of Maryland is your one stop shop for ALL your Remodeling needs! Remodeling Wizards of Maryland is a family owned and operated company where our customers are treated like family. We strive to offer superior products at reasonable cost . We pride ourselves on insuring customer satisfaction and always look forward to a returning customer or a referral. Simply put, we bend over backwards, jump through any hoops, and cross any bridge to make sure that our customers are 110% satisfied.Cost of project is by job with care given to each and every customer and project. Owners John Capozzi and Marirose Capozzi. 443-310-2484  …

When it comes to providing modern professional assistance with planning home improvement and renovation projects, IRG is one of the best in the Baltimore/Washington D.C area. We are truly dedicated to easily guiding home owners throughout the entire home renovation process from, planning the scope of work planning, budgets, schedules, contracting and so much more! Integrity Real Estate Group's proven time tested system will guarantee your project’s completion and success, making your dream home a soon reality. IRG's process is truly hassle free, we put your needs first and will do everything in our power to ensure all your needs are adequately met by tailoring to all your specific needs. Here’s what one of our past clients had to say bout us… "Integrity home is an amazing company to work with! The customer is impeccable. I have used this company to do several projects for my business and home. They have always gone above and beyond. I strongly urge anyone to work with this company if you are looking for any commercial work or home improvement. Trust me, they will not let you down. Kudos to IRG, you guys are the best!” - Real Customer Review! If you are looking for a slight home remodeling project, or a total home renovation, look no further. Integrity Real Estate Group transforms the increasingly complex and confusing language of today’s real estate market and construction industries, and transforms it into information that homeowners or investors can use and act upon. We understand the many complexities related to any building project, we pride ourselves on turning them into opportunities for our clients. Whether your looking for a tried and true General Contractor, beginning your Real Estate Wholesale journey, or maybe just want some minor upgrades to your home, IRG can help!  …

With over 70 years of experience in home improvement, Long Home Products is the industry-leading company you can trust to give you peace of mind. We are a locally owned and operated company that values honesty and integrity and treats your home as if it were our own. We are experts in all aspects of roofing, bathroom, window and door projects. We pride ourselves on the quality of our work as well as our commitment to outstanding results. We look forward to building lasting relationships and guarantee your satisfaction!  …

Working with Charlie was exceptional. The addition was a major undertaking for me and my wife but after the initial meetings with Charlie we knew we were in good hands. The work started on schedule and continued that way even with the many "small" changes my wife and I requested during the course of the renovation. The work was of excellent quality and the few small concerns we did have were addressed immediately and to our satisfaction. Charlie and his team frequently exceeded our expectations. They even surprised us by decorating our house for Christmas which occurred during the renovation. Since the work was done, we continue to remain in contact and I've contracted with Charlie for smaller jobs.

Description of Work
We hired Charlie and his team to add a second floor to our home and remodel the existing first floor. He oversaw everything from the demo (everything was removed except for the four exterior walls) to the handover of the key when the job was complete.

The service we received from the C Moore Builders team was excellent. They were dependable, trustworthy, and excellent at updating the old house. The end result looks as if it always belonged there.

Description of Work
Overall it was a large project. We have an older cape code style house. First we contracted to add a second floor addition for a bathroom. Then we had them combine 2 bedrooms on the first floor for a master suite and gut and expand the first floor bathroom to serve both the new bedroom space and as the hall bathroom.

My husband and I interviewed three Angie's List electrical contractors. Selected C. Moore Builders based on the quality of the work provided in a prior project replacing main beams that hold up the house. Since Mr Moore's employees had done such excellent work previously, we hired his company to provide a top quality master electrician for the electrical work. Mr Moore provided Kevin Askew, master electrician, of KLA Electrical Services and his assistant, Ron. Both men were very impressive in their demeanor and professionalism. They worked through the entire day providing both impressive technical expertise and aesthetically-pleasing work product. Kevin answered all of my questions in plain English rather than techno-speak, an ability greatly appreciated by this homeowner. Kevin and Ron fulfilled all of the items listed in the contract: Removee very old existing Federal Pacific 150amp electric panel. Supplied and installed a new Square D 200 amp electric panel. Supplied and installed new 4/0 service wire from new panel to entrance head on side of house. Grounded new panel as required for code. Obtained standard permit and arranged for AACO Inspection of completed work. Arranged for hook up of new service cable with BGE. Removed old service cable wire after BGE hook up complete. The only challenge that I encountered was getting a response from Mr Moore about the start date for executing this contract; thus, I rated his responsiveness a C. Other than that, I would recommend C Moore Builders to all.

Thank you for your review. I am glad we were able to complete your job to your satisfaction
2.0

On June 18, 2015, I emailed the company through Angies List for an estimate. After hearing nothing for a few days, I called the company and left a message. A few days later, they called back saying that some one would call me to schedule an estimate. A few more days, I never heard back. I observed a C. Moore Builders truck in the neighborhood and inquired with the driver who happened to be the owner. He asked if I had time and came to my home to take measurements. I was in need of a 12'x24' composite deck, two closets, three bathrooms, kitchen area, foyer, and hallways ceramic tiled. The owner was very friendly I will say. He told me that he would get to the estimate as he was going camping for a week. I said that was not a problem because I too was going on vacation (July 6) and that I was not in a hurry. He said he would get the estimate to me. Its now August 20th, and I have heard nothing. Since then, I have hired another Angies list contractor. Maybe my measurements were lost or they just didn't want the job, I don't know, but I have heard many recommendations for this company from friends.

Description of Work
Stopped by home to take measurements for an estimate.

[member name removed], Sorry that we did not get back with you in a timely manner. We do try to contact customers in a timely manner even when we cannot do the job we will let them know. Somewhere along the line your information was lost and inadvertently forgotten. I do apologize and hope if you need work in the future you will consider giving us and give us another shot. Thanks, C. Moore Builders
5.0

The two main beams that were holding up my house were extremely damaged by termites prior to our purchasing the property. We discovered this damage when we were removing basement framing in order to install new walls. I asked Mr. Moore to take a look at the damage and provide me with a cost estimate for the work required to replace the beams. Of the three contractors I interviewed, Mr. Moore was the most professional; so, I hired him. A week later, his men arrived promptly at the time arranged and proceeded to build two walls to support the house while they were working. They removed the 2 old beams and replaced them with 3 new beams. The job took a full day and a half. I was pleased by their work ethic and professionalism, as well as the end product. My house is now structurally sound and I will hire them again in the future.

Description of Work
Replaced the main beams that were holding up the house.

Description of Work
He's done quite a bit of work for me over the years.

I am delighted with the work done. All products used appear to be top quality and the attention to detail was outstanding. Everything is beautifuly finished. Even the (extensive) caulking is very neat. My neighbors are pleased with the results, too. Everything attached to the house was removed and replaced nicer than it was installed before. During the tear-off process, old termite damage was uncovered. The damaged areas were also repaired. Although that was an extra cost, it was reasonable and promptly done.

Charles Moore has been a pleasure to work with. I asked many questions before deciding to hire him - he is very professional and patient, taking the time to LISTEN to my questions and what I wanted and explained things that I need clarification on. His two sons work with him and are also polite and professional. I have been very happy with the quality of work done so far - the job is almost complete now. I would recommend him to others, and look forward to working with him on my next project.

We offer all remodeling service and oversee every job from beginning to end. We handle insurance jobs, real estate, 203K, handyman, etc. No job to small