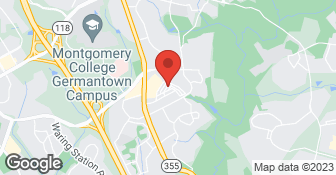 Frank's Blacktop is a 2nd generation company that has completed hundreds of asphalt driveways & parking lots in the Baltimore, Washington Metropolitan area over the past 20 years. We have 35 years experience and own and operate our own equipment. We have proven time and time again that we have the necessary skill & equipment to handle anything form the smallest repair job to the largest renovation project.

Nick and his crew were prompt. They were courteous and performed the work as discussed. Nick was on-site the entire time and supervised the work. They moved the dirt from the driveway to my back yard where I directed them to at no extra cost for the labor. Two of my neighbors were so impressed with the work that they hired him on the spot to do their driveways too. Best estimate I received for the same work. Wouldn’t take payment until I was completely satisfied with the work. I had watched a video on how the work should be done and Nick and his crew followed it to the letter.

The service was excellent!!!

The people did a very good job. Replaced culvert pipe and laid out 2.5-3.0" Asphalt, compacted and rolled the surfaces, came back 2nd day per request to repair a few patches. If you want to hire this contractor, be sure to fully understand the procedure of this type of job and work with the contractor to ensure you get what you desire to be.

I needed a short driveway refinished and a lengthy extension added to an eventual garage location. Nick and his team were fantastic. Nick, the owner, provided the estimate and spent a good bit of time discussing the best approach to my project. Nick was onsite for the job and when my yard proved to be far wetter than imagined and required a great deal more material than anticipated, he went the extra mile to ensure it was done properly. He also worked with me along the way as I identified little 'nice to haves' I hadn't originally considered. His team is very friendly and pleasant, and didn't seem to mind too much as I watched the project unfold. I would highly recommend them.

Work was done promptly and professionally, exactly as described and quoted. Looked at the job on a Saturday; did the work the next week.

They were real professional and outstandingly fast. It took them a part of the day to finish it. It's a really big driveway; it's about 150 feet long. I left, I came back and they were done in like six or seven hours. I couldn't park on it for two days. They came in, excavated and leveled it out because it was a gravel driveway originally so still the base was there. They came in, dig down the space of the layout, redistributed the gravel, poured the asphalt, roll it and they were done. They had a pretty good sized crew too and it was a like bunch ants going after. They were really amazing. I wasn't here when they did it but I saw some initial stuff. I thought they would be working half day and I figured that I would be here back to get to see the rest but they were done, cleaned up and gone when I got back. There was just a driveway and nothing else. They came out and did an estimate I think the next day after I called them. They did the job two or three days later, zipped off and they were done.

Description of Work
Franks Blacktop And Seal Coating came out about two months ago and installed an asphalt driveway.

Would have preferred to be informed that he did not want to travel to Arlington.

Description of Work
Called for an estimate. Scheduled two separate dates, but called and referred me to Morgan Paving. Did not seem to want to travel that far for work.

This job took 1.5 days to complete. Nick, Frank's son, was a pleasure to work with from estimate to installation. He and his crew arrived on time - even early. The crew was efficient, neat and did a great job overall. I love my new driveway and recommend this company highly.

Description of Work
My existing pathetic gravel "driveway" needed to be completely regraded and extended to the garage. Property line, parking and drainage issues needed to be addressed. Rocks, sod and garden materials needed removal or relocating as well.

TOUR-UP AND REMOVED OLD ASPHALT. WIDENED DRIVEWAY WITH BACKHOE. LAID FOUNDATION AND NEW ASPHALT. COMPLETED JOB IN ONE DAY, INCLUDING CLEANUP. DID EXCELLENT JOB. VERY PLEASED WITH HOW IT LOOKED.

Description of Work
CAME OUT TO HOUSE AND GAVE FREE ESTIMATE FOR REPAVING AND WIDENING DRIVEWAY. RETURNED TO COMPLETE JOB.

M&D Paving, Inc. is a third generation family owned and operated asphalt paving company serving the Maryland area. We have over 35 years of experience in the paving and concrete industries and have provided hundreds of homeowners and commercial clients with nothing but the finest asphalt and concrete work available on the market today. Since we are family owned and operated, our personal name is on every job, and we hold customer satisfaction in the highest regard. We always provide our clients with multiple references so they are ensured we stand by our commitment that we will provide only an expert quality job at a fair market price. We are licensed, bonded and insured MHIC member.  …

We have been operating since 1985. This is an owner-operator company and we have at least 40 years of experience. Our goal is customer satisfaction. Before work is performed, each job is clearly explained by the owner to the customer, so that the end result is not a surprise. We are equipped to handle any size job, large or small with the latest modern machinery available to a paving contractor. Whether your project involves paving or seal-coating, rest assured that it will be done in a neat, professional manner.  …

***Please Leave Voicemail or send email*** We will respond as soon as we can! Ben Burris Paving is an asphalt paving company that has been proudly serving Maryland with pride, integrity, and attention to the details for over 34 years. Owner-operator, experience in paving since 1974. We provide top quality asphalt paving; residential driveways, parking lots, patching, and stone & grade-work, hot plant mix. Our equipment yard is located out of Laurel, MD.  …

How is Frank's Blacktop overall rated?

Frank's Blacktop is currently rated 4.8 overall out of 5.

No, Frank's Blacktop does not offer eco-friendly accreditations.

What services does Frank's Blacktop offer?