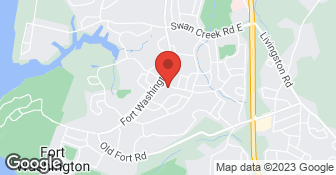 Description of Work
I used AHE Contractor for hanging some pee homes for pigeons on the wall and putting the ceiling fan.

Anthony arrived promptly at the pre-arranged time and asked what I would like him to work on. Not knowing what his handiman specialties were, I asked if he could do electrical. Turns out he is a master electrician. Jackpot! He did the outside work first, completing it handily. The ceiling lights were a little more involved. He showed us a piece of the existing wiring. It was obvious that it needed to be replaced. He went out to Lowe's and purchased the necessary material, and upon returning, replaced the old wiring and installed the two new lights. He ended up spending three hours instead of two, and wanted to comp the last hour since the wiring replacement was unexpected. We insisted on paying, but he would only take the "deal" rate. Anthony was a pleasure to work with. He was cheerful, professional, and obviously skilled. He came all the way from Maryland to Manassas VA, and said he would be happy to come again.

It went very well. They were very professional, showed up on time and clean up after themself each day. The project was actually completed ahead of the estimated time and the price was exactly what was quoted. Very please.

Description of Work
Remodel my condo: Kitchen and bathroom

LFC is a family oriented company whose team is actually made up of family and friends who have over 75 combined years of experience in the remodeling and home repair industry. We love working together, we love remodeling and we love helping people. Our goal is to provide quality service at affordable prices for all of our clients. We understand that your house is your home, that is why we make every effort to protect your home during the repair and renovation process. All our of Home Repair Specialists use drop cloths and plastic covering whenever necessary to keep your home safe and dust free. We also do a thorough clean up after every project. The only evidence that we like to leave behind is a job well done and a satisfied client.  …

Affordable Roofing and Affordable Pressure Washing are veteran owned local companies. They are Branches branch of our Affordable Group of companies along with Budget Construction Cleaning. Having been involved in the construction industry since the late 1980’s in the DMV area, we saw the demand from our customers to provide them with roofing services. We’re also a family-owned business. Ellie Harvey has headed the administrative part of the group for over 15 years, forging relationships and a high quality workmanship reputation in the region. Her son Johnny Hernandez joined the group after an honorable career in the US Military and the DC Police Department now heads the day-to-day field operations.  …

How is AHE CONTRACTOR overall rated?

AHE CONTRACTOR is currently rated 5 overall out of 5.

What days are AHE CONTRACTOR open?

No, AHE CONTRACTOR does not offer eco-friendly accreditations.

Are warranties offered by AHE CONTRACTOR?

What services does AHE CONTRACTOR offer?