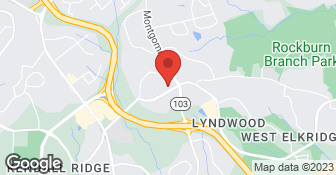 When it comes to your home and your family, we know that safety is a priority. So, if you are looking for a dependable and responsive company to provide radon mitigation in Maryland, Reliable Radon is here to help. From our professional and experienced staff to our attention to detail and ease of scheduling, Reliable Radon works to provide the best in customer service....

Ryan and his crew were here at the scheduled time - to the minute. They were courteous (yes sir, yes maam) and very efficient. When compared to other mitigation systems that i've seen, their install is cleaner and materials are of a higher quality. The install was complete in just 2 hours. I don't know what the industry standard is but that has to be fast. Ryan explained the system, its function and how to conduct the post-install test. The best part... They were able to come sooner than any other contractor, worked around our schedule and they matched the quote that we'd gotten from another company.

The unit was installed in a timely and professional manner. They surveyed the basement, made a recommendation and installed the unit.

Great. Our radon levels are back to where they were before our system failed.

Reliable Radon was able to schedule quickly, and Robert did a very neat job activating my existing passive radon pipe. It was a challenging job, with the pipe tucked in a corner behind an HVAC unit, but Robert did it very cleanly. The included re-test gave us a high reading, so Reliable dropped off another test, which showed that the actual radon levels had been remediated quite well by the work.

On May 29 we noticed the radon meter in our basement was broken and called Reliable Radon based on Angie's list information and because I like to patronize local businesses. An appointment was set for May 31 between 2 and 6 PM, with a call 30 minutes before arrival. I have breathing problems and was really happy they could come in just 2 days. The quoted price was $125 for the service call and $30 to replace the meter, with the possibility of additional charges depending on the situation. I asked if they would honor the Angie's list coupon for a 5 percent discount, and was told the quoted price already included the discount. On May 31, we hadn't heard anything by 5:35, so called to see if someone was still coming and were told the serviceman had gotten stuck on an earlier call and was on his way. He then called about 5:45 to confirm and arrived a few minutes after 6. He found that our radon fan had failed and also needed to be replaced. He wasn't sure if the price would be $500 or $599 so called the business owner to find out and said the total price would be $599. Due to my breathing problems we wanted the repair done right away and agreed. He replaced the fan and meter - he had all the necessary parts on his truck and did an excellent job of removing and replacing the exterior fan and interior meter. He also looked at the basement floor and made suggestions for things we could do ourselves to reduce radon risks. He finished work around 7:20. I asked how we should pay for the work, and he said we would get an email invoice and could pay online. The next day we received the invoice, which was not itemized and did not show the Angie's list discount. I paid the bill promptly and sent an email asking for an itemized bill. The response said "Attached is your invoice with the charge for a Radon fan replacement, it was $599 and we included replacing the manometer in that price and we waived the service call of $125. Let me know if you have any questions. Have a good day." I asked again for an itemized bill and got the response "We offer our customers the best promotion we have going on. The Radon fan replacement we did at your home, the normal price was $699, labor being 50% and parts 50%. So we gave you the promotion price of $599 which was a better discount then the Angie's list 5% off $699. Please let me know if you need anything else." I thanked them for the explanation. It has been over a month since the repair, the replacement meter and fan are working, and our continuous radon monitor shows radon is well under recommended limits. So my overall comment is mixed - I rate the quick scheduling and the repair as excellent. The repairman was knowledgeable and skilled and had all the necessary parts and equipment with him on the first visit. But communications with the company weren't as clear as we would have liked, either about the late arrival for the appointment or billing. I'm used to contractor bills itemizing parts and labor and Angie's list members spelling out the discount, and was surprised at having to ask more than once for an explanation of charges. If I need radon work done again in future I will probably check with other providers.

The system was installed at an investment property that was under contract for sale. I was not there when the work was done. The installer called me when he arrived and texted me pictures of the rough-in of the system asking for my feedback and then was responsive to my suggestions for changing the location of the exhaust piping. Workmanship was good. I'm quite picky, having been a home inspector and aware of how radon mitigation systems work. So when I asked Robert, the installer, to return to meet my possibly unrealistic expectations, he did not hesitate and returned that evening to address my concerns. The retest had results of under 2.0 indicating the system was properly installed and is doing its job. I would recommend Reliable Radon to any homeowner to address radon levels above 2.0, knowing what I know about how dangerous prolonged exposure to radon levels is for one's health. They work efficiently and professionally and concern themselves not just with the function of the system but also the aesthetics on the outside of your home.

Description of Work
Installation of a radon mitigation system

Very good. Kelli was incredibly responsive and helpful. Technician on site was professional, courteous, neat, and efficient. I would recommend and use them again without hesitation.

Reliable Radon was not only the best price of the three bids I got but they did a terrific job in a very timely fashion. Finding a way for the pipe to go from our basement to above our roof line was not easy but Reliable put the puzzle pieces together and made it work. Very impressive!

The service man was on time, knowledgeable and completely efficient. He took care of our problem with one visit!

The tech discovered a few other things were out of code. The new pump was installed outside the house, a kill switch was added, and the old pump was remove. The dispatch/scheduler (Kelli) was very prompt and professional.

How is Reliable Radon overall rated?

Reliable Radon is currently rated 4.9 overall out of 5.

What days are Reliable Radon open?

Are warranties offered by Reliable Radon?

What services does Reliable Radon offer?