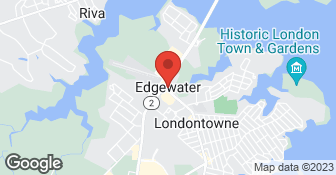 The work, while tougher than the team originally expected, went well enough to eliminate HOA citation to repaint the steps.

Description of Work
Paint removal from outside concrete steps via pressure washing.

Description of Work
Fall Cleen up

They arrived 45 minutes early. Problem for us is that it was 7am and woke a couple of our children and us. They missed the primary reason I called (had a short fence line with Poison Ivy on it, it is still there in full force, not touched), they hacked one major weed and left the trunk (2 feet high), and there are other examples. Appeared to be a lot of walking around and looking. My belief is they probably made as a company somewhere between 20-40 per person (4 people) for the 2 hours they were here.

Description of Work
Crew Cut gave us a "crew cut" job of landscaping. We purchased a high grade quality company (I would expect for an "A" company at $50 per hour "discounted"). They weeded (hacked), removed, cleared, and decluttered some things around the yard.

They arrived on time, but only one person in the crew spoke the language. He dropped the crew off and left, so it was impossible to communicate with the crew. The crew didn't know the difference between a weed and flower. Needless to say the majority of my Black Eyed Susan's were gone before I was able to stop them. They also didn't take the appropriate care when spreading the mulch. They would dump it on top of plants and just leave it that way. Again, needless to say I no longer have my oriental poppy. At the end of the day the individual who spoke English returned to pick the crew. He never came to door for payment or to check if we were satisfied with the service. He just pick up the crew and left. Two weeks later I receive a bill in the mail with a big PAST DUE stamped on it. They didn't knock on the door for the check and suddenly I'm delinquent!

Description of Work
Gutter cleaning. Good work, but too expensive for an easy job.

Description of Work
Power wash of concrete to remove layers of paint. While the work turned out to be more involved than originally assessed, the folks from Crew Cut stayed with the job until all the paint was removed as promised. I am very satisfied with their professionalism and the quality of the work performed.

Description of Work
leaf removal from my yard. they did a great job & quickly

Service was excellent. All leaves were removed from the yard and garden beds.

Although this service went well, my husband had specifically asked that they work on the front yard first but they went to the back yard first. Since there was a time limit, we were more concerned about our front lawn.

Description of Work
Trim bushes and left clean up

Description of Work
They did a great job. Jason reached out and we talked. I explained my yard is large and had a lot that needed to be done. He walked me through how I should prioritize. When they came, they came on time and they didn’t need supervision. They did a lot of leaf work and there were no shortcuts! They were willing to move things that were in the driveway. They did a job well.

This was a Big Deal - six hours of lawn/leaf cleanup. Provider didn't contact me within a few days after the purchase and Angie's List sent me a message, asking if they had. The next day I had a message from them. They said they'd arrive between 9 and 10 yesterday, but didn't show up until 11. Based on what others have done with six hours in my yard, I believe they should have gotten a lot farther than they did. Seemed great on blowing leaves in huge piles but not so great in loading them into the truck and hauling them away. A disappointing outcome, and I'm very glad I didn't pay full price for it.

I'm sorry you were disappointed. I did call and let her know the crew was about an hour behind and she said that was fine. The crew worked the 6 hours as instructed and loaded the truck as they went. There was a very large amount of leaves in the yard and my crew was instructed to work the 6 man hours and then if the client wanted more time, they would have to pay our normal man hour rating. At the 6 hour mark the client did not want to pay for more time so we left and went to our next job. If you buy 6 hours of work, understand our crews will work hard In that 6 hours to complete the job but don't expect a 12 hour job to be finished in 6 hours. All of our other Big deal purchases were completed in the 6 man hours except for this job due to the massive volume of leaves on arrival. All Leaves were blown into piles and then loaded into the truck. We left the leaves in piles that could not fit in our truck at the clients property as they did not want to pay for more then the 6 hours that they purchased through Angies list. I am willing to give you 10% off any our regular rate for future purchases with Crew Cut if you would like, just call 443 336 3525 for an estimate. Have a great day.
5.0

They did a nice thorough job and took away all the debris, including some I had gathered in advance.

Thank you, Yes we did grab the few branches sitting on the side too.
5.0

Description of Work
Power washing. They did an excellent job.

Everything went okay with the services performed by Crew Cut Enterprises. I had a problem and they had to come back and fix the problem but other than that they were fine. I grade them a 'B' because they had to come back. They had specific directions that they didn't follow and they had to come back and fix them. They were fine. The owner was the one who came and gave me the estimate. I have had other people do the same work since then. I think I came across this company through advertising. They were reasonable for the cost. They were reasonable when I had them. We had one issue with the quality but they came back and made good on it. It took time to resolve, it wasn't resolved until a year later but they resolved it. They came on time when they came to do the job. They treated me professionally. I wouldn't recommend them. I went to another company because of that.

Description of Work
Crew Cut Enterprises did a yard cleanup for the spring after the winter.

Description of Work
They mow and weed eat my yard; they blow off sidewalk.

Description of Work
Fall clean up and mulching. Great service

The owner came over to give an estimate the same day (Friday) that I called. I was desperate for the services to be completed quickly because of out of town company coming. The schedule was manipulated to do the job right away. Chrews came & worked all day Monday & Tuesday & completed the job beautifully. Very professional! Worked long days and through rain to get it done!

Thank you for the business. I know we missed you this year but we hope to do business again next year. Have a great winter and see you in the spring. Jason
1.0

I contracted Crew Cut Enterprises to mow the lawn at my house in Annapolis, MD. I live in Texas, and only visit Annapolis every few months. I have been routinely billed $70 a month (two cuttings a month) for approximately 5 months. I spent three weeks at the Annapolis house in October 2010. My mowing day is Friday. Nobody mowed while I was there, and the grass obviously had not been mowed prior to my arrival. I was billed for two mowings ($70), on November 1st. I called Jason, but was sent to voice mail...3 calls over three days. I e-mailed Jason, 3 times over three days, with no response. I don't believe they performed the work for which they billed me. I was willing to discuss the issue, and probably would have kept Crew Cut, had Jason made a good faith effort to make this right. Jason didn't waste any time contacting me for the updated billing address on my credit card, when I moved this summer. He is very conscientious about ensuring he gets paid, whether or not the services are performed. The price quoted was reasonable, if the work was actually performed. I graded the price as "F", because I was paying for nothing. I anxiously await Jason's response to this report. I e-mailed him and informed him that he needed to respond to avoid a negative report on Angie's list. He, obviously, doesn't care about his company's reputation. If you hire Crew Cut, you should be prepared to supervise them.

Description of Work
See Below.

I do apologize for this inconvenience. This problem was settled with the client as this is an old review. Thank you Jason
4.0

THEY ARE NICE, THEY DO GOOD WORK. THEY ARE NOT GOOD ABOUT SHUTTING THE GATE AND THAT RESULTS IN OUR DOGS GETTING OUT. THE LAWN LOOKS GOOD BUT THEY DO NOT HAVE A BAG TO CATCH THE GRASS SO THERE ARE LINES OF CUT GRASS IN MY LAWN. THEY COME WEEKLY.

Description of Work
MOWING OF LAWN.

I'M UNSURE OF THE CUSTOMER BUT I WILL AGREE ABOUT GATES BEING LEFT OPEN HOWEVER, CHECK YOUR GATE BEFORE YOU LET YOUR DOGS OUT AFTER SERVICE. ALSO WHEN YOU FEED HIGH AMOUNTS OF NITROGEN AND LARGE AMOUNTS OF WATER, THERE IS TOO MUCH GRASS TO MULCH INTO THE LAWN AND MAY RESULT IN SOME LEFT OVER GRASS.
5.0

THIS IS A WELL MANNERED PROFESSIONAL COMPANY. IT IS VERY SMALL, BUT IT GETS A LOT OF BUSINESS. I AM VERY PLEASED WITH THE LAWN SERVICE THEY PERFORM. THE LAWN LOOKS HEALTHY AND GREEN.

Description of Work
TREATMENT AND FERTILIZE.

Thank you the business. Jason

Maryland Lighting and Sprinklers is a local veteran owned company that services both residential and commercial customers. From service to installation we are the leading company for irrigation, and outdoor lighting. We offer 24hr service for all irrigation customers as well.  …

ON THE GREEN INC

On The Green, Inc. guarantees to produce a thicker, greener, healthier lawn! Our Green Care Lawn Program includes organic fertilizers, poly-coated slow-release products, liquid weed controls and the latest technologies in the industry. In addition to lawn care our Certified Technicians can provide Pest Control Services for Mosquitoes, Ants, Ticks, Rodents, Roaches and other Home Pests. As an industry expert, over 25 years experience and 5 star reviews On The Green, Inc. is the perfect company to care for your lawn and home.  …

Crew Cut Enterprises is currently rated 4.4 overall out of 5.

No, Crew Cut Enterprises does not offer a senior discount.

No, Crew Cut Enterprises does not offer warranties.