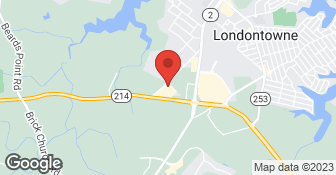 Their service has always been wonderful. Over the years, they have done small jobs and we have always been very pleased with their work and professionalism. In fact, when our son, in Baltimore, wanted a whole house generator, we recommended them. Our son is very pleased with their work and has recommended them to a friend who is interested in a generator.

Description of Work
We needed a kitchen light replaced .

Great. The eletrician knew wath to do and did it in a timely manner. Good work. Good service.

Description of Work
Installation of ceiling fan in kitchen.

It would be hard to find a firm with less integrity and honesty. If I could give them negative stars I would. If you are looking for skilled electricians and good customer service, look elsewhere. These people not only lie, but they do bad work, don't take responsibility for their mistakes and, in fact, simply never return your call as a way of avoiding any issue they don't feel like handling. They installed a large 5-rail chandelier in my home, which, only minutes after the work was "complete", began falling out of the ceiling. They claimed it was not their fault but if you hire a reputable firm, you would expect that they would bring experience and expertise .. not excuses and avoidance of a mistake. They recently came to assess a problem with the same chandelier, and while doing that assessment, caused more damage to the chandelier itself and the surrounding dry wall in the ceiling - in fact, in the words of their own employee, they stepped on the chandelier from above in the attic and pushed it down through the ceiling. They claimed it was not their fault, even though they were the only ones who had been in the attic working on it. Now they won't return my calls because they don't want to take responsibility for their mistake. NEVER CALL THESE PEOPLE. They are dishonest, have absolutely no integrity, zero customer service, and are beyond rude. Absolute worst firm I have ever dealt with in the 20 years I have lived in this area

Description of Work
Installation of a chandelier

Very Well. Call backs because of small glitch were done at no charge and did not leave until the problem was solved. They never tried to upsell me on anything.

Description of Work
on time, professional and thoroughly capable. So professional that they brought a small boat cause they knew that they would be working on pier electric. No one else would have done that.

Serviceman was prompt, neat and professional. Final price was exactly as quoted. David scheduled work in a pinch for me after my independent contractor bailed on me. They were terrific and beat the other guy's estimate!

Excellent service. The first appointment was schedule within days, and Jeremy was prompt, courteous, efficient and had the part (thermostat) that was needed. After looking at the various ways to run the 220 so I could move my dryer, he provided an estimate. He called back within 48 hours to schedule the task. He used the crawl space (extremely low) and ran the 220. I am sure it was not a fun job, with a lot of dust and grunge to deal with. He and his co-worker finished in a very reasonable amount of time and in a professional manner. I'll definitely call them for any electrical work in the future.

Description of Work
Replaced 21 outlets, diagnosed and repaired a series of outlets that had loat power.

They did a great job. I called them on a Monday and they came out on Tuesday. I had the replacement unit already, and in 40 minutes, he had it up and running. I was totally happy.

Description of Work
They installed a ceiling exhaust fan and a heater in my bathroom.

It worked out very well! They were very professional, timely, and responsive. They worked with me to figure out the most cost effective solution for my requirements.

Description of Work
They installed two transfer switches to support a generator.

Responsive to call and performed excellent, carefull work that did not require repainting or clean up. This is my "electrician of choice" and they are the first call I make when electrical work is needed. I have used them several times and have never been disappointed.

Description of Work
added outlet in bathroom and ran wire through wall to basement and panel box for new circuit.

Our photovoltaic solar system wasn't working and the company that installed it 4 years ago isn't in business anymore. So we looked in the yellow pages under solar and selected Bausum because they were local to Edgewater. They sent a repairman out quickly and while he was litterally on the phone with the manufacturer troubleshooting, the whole panel went "pop" with a puff of smoke. Luckily the panel was still under warrenty. It took a bit more trouble shoting and two more visits to get a new inverter installed. One of the visits the multiple hours of effort didn't fix the problem the way the manufacturer said it would, and Baussum graciouslly didn' charge for that time, since they didn't correct the issue at that time. With the new inverter, eveything works spendidly. A few weeks later we had them come out and re-wire a new dishwasher that was being relocated in the kitchen. The tech was on time and quickly completed the new wiring.

We used Bausum and Duckett to provide all the electrical work for the new home we were building. We hired a construction manager for building the home, but we dealt with all the subcontractors directly. Bausum and Duckett is the only subcontractor we would not recommend to another homeowner. The workers were courteous and respectful, but we failed the county electrical inspection twice. We have since started using other electrical contractors and have had much better success.

Description of Work
Electrical Contractor for our house

third time we have used..improvement in both price and reliability over past electrical contractors

They responded quickly and punctually. Their work was professionally done and the job quickly finished in less than half an hour. The electrician was courteous. I received a senior citizen's discount and the total charge after the discount was $108.00 which I thought was rather high. The owner has since sold his company to three of his workers and in a newsletter stated that he vouches that their work will be the same high quality as when he owned the company.

Description of Work
I had the water pump and holding tank replaced; however, the plumbers would not reconnect the wires from the acid neutralizer pump to the pressure control switch. I called Bausum & Duckett to reinstall the electric wires.

Excellent. I have used this company in the past, I'm glad I did so this time, and I would definitively use them again. An estimator came out to the house to walk through my general ideas and turned them into practical specifications. The work took 2 days, one to install the new panel, and one for the rest of the work. Some of the features I wanted were not acceptable to the building inspector, so the estimator worked with me to come up with a better solution. The electricians doing the work arrived on time and cleaned up afterwards. There was a quality control checklist which was reviewed with me at the end of the job. In working on the panel, there was an unintentional arc spark between the electric company feed and the panel feed which caused scorching of the house's vinyl siding. The company took responsibility for the accident and sent a sub-contractor within two days to clean the siding at no cost to me. The company was prepared to replace the piece of siding at no cost if that had been necessary.

I was not impressed. First day they didn't show up at all. At least the second day they said they'd come they did, but an hour late. They replaced the main line but did nothing for the cables damaged by the fire. Came back a second time, were rude and condensending to me, before the inspector showed up put down all inspectors. Made the repairs to the lines that were damaged except the 220 lines. Except this work failed inspection as they didn't ground the junction boxes that were installed. So they had to come back AGAIN to complete the work. And again the workers were condenscending and let it be known they felt they were wasting their time.

Description of Work
Hired by Verizon to repair the damaged caused by installer drilling into main power line of the house which in turn caused a small fire.

Bausum & Duckett Electric did a good job. Their service was excellent. I can't remember how much I paid for everything they did, but it seemed like the value was good for the money. I liked them a lot!

Description of Work
Bausum & Duckett installed a ceiling fan in one room, an outside motion detector, repaired the light outside the front door and checked the exhaust fan in the attic.

I got an estimate from the guy I made the appointment with on the phone and he confirmed that this was probably about a $500 job with the electrician before he started the work. At the end of the day I was presented with a $1200 bill. He did not even finish the work and damaged the new panel he put in. The company did reduce the bill to about $850 after I complained & took 2 hours off work to show the boss the job, and they did come back to install the final piece that the original electrician missed. But the "new" panel is still dented and scratched from his pounding on it with his pliers to get it to shut. In the final analysis, bill should have been about $700-750 so I still feel like I got skinned.

Description of Work
Replaced outdoor electric panel (8/16) with a main circuit and pulled new wiring through 2 lengths of existing outdoor ductwork (about 75' each).

Maryland Lighting and Sprinklers is a local veteran owned company that services both residential and commercial customers. From service to installation we are the leading company for irrigation, and outdoor lighting. We offer 24hr service for all irrigation customers as well.  …

We are proud to have won more than 50 Angie's List Super Service Awards! We do everything on the honey-do list that honey doesn't do! Individually owned & operated franchise of the largest Handyman companies in the country. We are licensed, bonded and insured. All of our technicians have a minimum of 10 years experience and are full-time employees of the company. All work guaranteed for at least one year (any exceptions are discussed and noted on the invoice). And it's not just the small jobs! We have years of experience doing larger projects, especially bathroom remodeling! MHIC # 102097  …

All In Electric, Inc. has been providing quality electrical services since 2011 in Maryland and the surrounding regions. Our electricians have 38 years of combined experience in the electrical field and a proven record of excellence. Our services include anything from new construction and home remodeling to light commercial projects. We are available to plan, design, construct, and maintain electrical features for projects of all sizes. Your satisfaction is our guarantee and we pride ourselves on our exceptional customer care. All In Electric, Inc. offers 24-hour emergency services for your residential and commercial needs.  …

Bausum & Duckett Electric LLC is currently rated 4.4 overall out of 5.

No, Bausum & Duckett Electric LLC does not offer a senior discount.

Are there any services Bausum & Duckett Electric LLC does not offer?