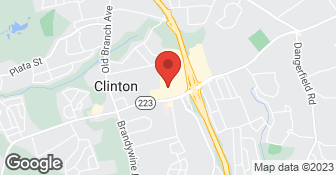 Done very well. Owner kept me informed about his worker, when he was running later Curtis contracted me with an eta. Before his very friendly and professional worker left, Curtis reviewed his work and asked me if I had any problems or questions. Work was done well and I appreciate how fast everything was done.

You may have heard people going the extra mile, but Curtis goes the extra marathon for his customers! His quote came in considerably lower than other providers for the same work, and in the end, when I wanted to change this, add this, subtract that, he was fine and very willing to do whatever I needed. Never did I get any push back from him or feel coerced to do anything I didn't feel comfortable. He has extensive experience and whatever he cannot do, he is upfront about it and knows people who can get the job done. What I do like too is that he is flexible enough for you to provide the materials for the job, and he can quote you just the labor, or you can buy some of the materials, and he'll do the rest. Curtis' level of communication was excellent as well; one night I recall having a phone call with him around 9 or 10 pm, and the next morning, he had a quote for me at around 5 am. Curtis lives and breathes his job (he once scheduled his personal family time around his work so he could finish my job ahead of schedule). The workmanship and quality are excellent, and importantly, he is licensed, bonded and insured. Long story short, no matter what, always ask for a quote from New Look Kitchen Bath and Design for your next project and you'll see how competitive their prices are and the quality of work they have to offer. He is so willing to help in any way he can and is full of great ideas. He is patient and very focused; he got my job done in a matter of several days (he works Saturdays), whereas it would have taken others a full week! All in all, very pleased and I look forward to working with him or referring him to my friends.

Description of Work
Curtis and crew remodeled my kitchen cabinets, removed my countertops, installed microwave, renovated my two full baths and other odds and ends around the home.

They didn't give me what I asked for and they also wasted my time.

Description of Work
They did kitchen and remodeling.

We knew with us coming in after all the other competing contractors and the current environment, that the project was not going to be good for us or given as we sell real kitchen cabinets and related products at the best prices in town. We don't do RTA cabinets and never focus on giving requested high end options for lower than a competitor is not even offering or carrying. Really hope the estimate, kitchen layout drawings, cabinet samples, and cabinet designing consultation you received, help you out. Good Luck on your project.
2.0

Very proud of my guys for working through the customer's erratic mood swings and behavior issues we witnessed on this job like we have NEVER encountered before. Being the THIRD (3rd) General Contractor chosen for this job and customer not having a bathroom for 7 years (what customer told me), we helped this customer out and finished an ENTIRE gorgeous Luxury bathroom with additional work added after contract. Very, very, proud of my guys and obviously bathroom came out very well. I originally had written about 7,000 words easily countering this customer's review and omitted FACTS, but I have been lead a different way. I hope customer takes my advice for the future on getting assistance for herself.
1.0

After we played phone tag and text tag for about a week we settled on an appointment. On January 22, 2015, I made an appointment with Mr. Curtis Franics for today Saturday January 31, 2015 at 3:00 p.m. Mr. Curtis Francis did not show up for the appointment. He did not call or text to let me know he was not going to be able to make it. I was very disappointed with the no show and no call. My time is very valuable and I don't like for people to waste my time.

Description of Work
Mr. Curtis Francis made an appointment to give me an estimate on a Kitchen project.

Apologized to [Member Info Removed] for missed apt. I was admitted to hospital and missed original appointment unexpectently. Had a second chance to meet her and was on time for second chance appointment, etc.
5.0

They quoted us for less than $10,000. It was like about $9900. They were very professional. He came in and walked us through every single thing that needed to be done and what was wrong and what it would take to correct it and we agreed that we would buy the materials but he would supply all the rough materials and he's going to supply the granite for the vanity and the seamless shower door and the paint and the labor. He has been in constant contact with us. About every three days, we get a text message or just any contact to find out where we are, do we have all of our materials. He actually met us with us last Tuesday to help us place the order and to make sure that we had the right grout, helped us with the design and the color and everything like that. He has been pretty much kind of hand-holding us which I can appreciate because it has been a scary process and we've had some bad experiences in the past. He's pretty much holding our hands and kinda built in that trust and that relationship so that we can feel comfortable with him so he really just went the extra mile. When we sat down to interview Mr. Francis, he was very cooperative. He had no problems answering our questions unlike some of the other contractors that came out.

Description of Work
We're actually about to contract with them. We got a quote from them. It was for master bathroom remodeling.

Thank you. We are very excited about your master bathroom project.
1.0

The responsiveness is very poor...They use a call service to receive messages...these people ill trained and very good lairs.

Description of Work
Nothing...Let over 20 phone messages over a duration...Never called back.

[member name removed], You are not, and never have been a customer of ours. You can talk to me directly with any concerns an employee or one of the receptionists has caused you.
5.0

Excellent. They we're prompt, courteous, conscientious and neat. They aim to please and to provide good service. They went beyond my expectations.

Description of Work
Installed backsplash plus in the kitchen.

We thank you for your business. Looking forward to the upcoming projects with you in the next week.
3.0

I had some problems, but the provider resolved them.

Description of Work
Remodeled kitchen and partially removed a wall.

Should be revised by your wishes through Angie's List. Thank you for your continued business and patience.
1.0

The company rep talked to me on the phone and explained a few things during the initial contact by phone. We set up an appointment at our house. He never showed up even though I was waiting way longer than the window of time he gave me. I will never call them again.

Description of Work
I called this company to have work done in my home in my basement family room and laundry room.

When this original grade was first given by customer, no one from New Look had met this member and no work was contracted or scheduled by New Look. Angies List Account Representative recommended I work with customer to rectify the matter. Taking matters into my own hands I initiated contact with member and apologized for what appeared to be a missed appointment. Member agreed to change "F" grade to possible "A" if member satisfied with the free work New Look had offered member. Work included New Look paying for all labor and materials to prepare & protect, prime, and paint two coats on ceilings and walls in living room, hallway, and 2 story foyer. Job started on October 20, 2014 with 4 New Look staff, cost around $1,800.00, completed 1-2 days early, staff was on time every day, and performed professionally while everyone wore company attire. On the last day of work, member (now an official customer), told each New Look staff person that she was thankful and they did a great job. When calling a week and a half later about the agreement, the only time customer called after project was completed, the customer told myself and lead painter, who has over 30 years experience, never to call her again and she would change the grade whenever she felt like it. Angies List will not contact customer or investigate truth, but has allowed me to update my response. Thanks Angies List!

At Remodel USA Inc.we are completely dedicated to meeting the expectations of our customers. One of the ways we ensure customer satisfaction is by maintaining our distinctive attention to detail while minimizing our installation time. For example, we can finish a complete bathroom remodel in only about 5-10 days, limiting the disruption to your schedule. We can also customize our services to meet your unique requirements,whether we're designing the ideal kitchen layout for your home or walking you through the sunroom selection process.  …

No, New Look Kitchen, Bath, & Design does not offer a senior discount.

Are there any services New Look Kitchen, Bath, & Design does not offer?