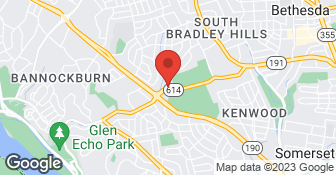 We work with our clients' schedules in order to meet and discuss remodeling opportunities. We will solve site issues that may affect your project including zoning, pull permits, skeptical locations and variance requirements. We arrange the design of your project. We work with several highly-recommended architects but we would also be glad to work with an architect of your choice. We are flexible and easy to reach to answer any client concerns. We are licensed and insured. We guarantee our work for two years....

Description of Work
They have redone a closet and they have done a basement work for us; as well as some electrical work and painting.

I have used Kader Construction for over 15 years from smaller jobs(bathroom remodeling) to a major home renovation (extreme make-over) for our home, as well as work in my offices (installed a new kitchen). Mr. Kader is on every job and has had the same core team for the entire time. He monitors all subcontractors and troubleshoots the problems. He is honest, trustworthy, and works with you to have a successful project. His bids are solid; he never adds on unless you have requested something beyond the initial estimate. He never leaves your project undone or you dangling. Ever. I can't recommend this company enough. His pricing is alway competitive and the results are fantastic. We hear the contractor horror stories from friends who have used other contractors. Every person we have referred to Kader Construction has also been as pleased as we are. He is not an architect and while completely competent for small renovations, he will recommend an architect, or work with yours on bigger jobs. For this last job, I used a local bath and design firm to design plans and order the bookcases. They repeatedly ordered the incorrect size for the filler pieces, and then (after all the bookcases, moulding, fillers, etc) were ordered, delivered and paid for, the designer informed us that they could not get the pieces in the actual size we needed (note: they had come onsite and measured...). In the end, the Kader team crafted the fillers and made the necessary corrections with moulding so it is completely inobvious there was/is something wrong. The end result is better than we imagined.

Description of Work
Gutted and remodeled an office kitchen, and also installed built-in bookcases in my home

He was very helpful and we would definitely use him in the future.

Description of Work
He came out to give us an estimate on the possible job.

It was great, it was finished all in just a couple of weeks. We added in a lot of other little projects and they didn't charge anything extra. His crew were honest, kind, respectful and VERY careful with our property. Mr. Kader also recommended a glass shower door provider who turned out to be great. He also sent over a floor refinisher to refinish the floor in the bedroom attached to the bathroom. We went ahead and had our kitchen floor done, too. Everyone he hired or recommended did a good job. It was a relatively small job but Mr. Kader never once made us feel as if it was not the most important job he had.

Description of Work
We had hired another bathroom remodeler to redo our Master Bathroom (very tiny -- 51 inches X about 80 inches). The fixtures consisted of a toilet, sink, shower stall, medicine cabinet and light. The contractor recommended taking it down to the studs (all the original fixtures, tile from 1929 were still in place). They totally screwed up everything, broke our boiler/radiator system and put massive construction debris into our sewer system. So we fired that contractor about 3 days into the job. Mr. Kedar and crew fixed everything, including repairs to the joists the old contractor damaged. He also repaired and replaced a rotten window sill, compromised studs, and repaired the plumbing issues -- repiped the vertical and horizontal water feeds, repaired the drainage system, put in an exhaust fan, subfloor. He installed the expensive marble tile we had purchased, installed all the fixtures, fixed the plaster walls damaged in other areas of the home due to the other contractors amateur demolition. He also built a closet and created a nook in the master bedroom while the crew was there. They painted, replaced woodwork that was damaged, and now we have a little gem of a bathroom. He expanded the shower stall without changing the footprint of the bathroom. The whole bathroom looks much larger. Not only would we hire him again, we would put him on salary if he weren't already busy with other projects.

The general remodel of our 1937 brick colonial included a complete rework of plumbing, electrical, heating and cooling, as well as moving walls, cutting openings in the brick exterior, laying new hardwood floors, and adding a three story addition that included excavating a new basement, adding a new kitchen and family room, and adding a new master bedroom and bath on top of that. The fact that Jawad does only one job at a time means he is 100% committed to the project fulltime. And he is on site every day, working along with his crew. Jawad is passionate, energetic, highly skilled, intelligent, and puts a lot of heart into the work. And the crew is just as good. They are conscientious, careful, neat, hardworking, and really nice. Not to mention patient when we changed our minds about things! There were many instances where Jawad would spot something such as a cut joist in the old part of the basement and automatically fix it even though it wasn't part of the architect's plan. He also identified and creatively solved issues that invariably came up during the renovation. Jawad and his crew were very detail oriented and their finishing work was fabulous. When the custom kitchen cabinet crown moulding didn't look as attractive as the crown moulding Jawad had run through the family room, he simply built a box on top of the cabinets and then ran his crown moulding around. Where Maryland code was stricter than DC, he automatically followed Maryland code. The inspector commented on what a pleasure it was to inspect because everything was done so well. And of the three bids we received, his was the lowest! We did spend twice what he allowed for granite, appliances, etc. but that was our choice. I really can't say enough great things about Kader Construction. I won't go to anyone else for any future projects we might have.

Description of Work
The builder drew out the curved outline for a new front flagstone walkway that had a 'Y" branching around the house. The left branch went to the front of the newly built portico. The right branch curved around the house where a new basement entrance had been dug out. Although I had originally been thinking of a rather basic narrow path to the new front portico, Jawad (Kader) and his stone mason designed the flagstone to be the width of the portico. Jawad drew out the outline of the curved walkway and it is fabulous! Everyone comments on how stunning it looks. We wanted an irregular shaped flagstone with a lot of blue and the stone mason made several trips to the distributor to bring us samples. And when he learned of a new shipment that had a lot of blue (but was still the lower priced "general" flagstone, he called us so we could quickly reserve it). The stone mason and crew worked diligently in very high heat to work the pieces of the stone into a very pleasing pattern that fit together well without a lot of concrete filler. (We had seen examples of walkways in the Chevy Chase neighborhood where irregular stones had up to five inches of concrete between them and we didn't like that). Regarding the right branch of the walkway that connected to the new basement entrance: The crew had to cut through the existing exterior brick basement wall and pour a concrete opening and stairs to create the new entrance. The crew attended to all the details, including how water would drain at the base of the steps. And they made suggestions with a good eye for design to make transitions between the new concrete and the old brick exterior look great, whether that meant adding a layer of brick or filling in with concrete. All the stone masonry work was amazing. All involved take great pride in their work and they want the customer to be pleased. They are highly skilled and very knowledgable. The work was done in an amazingly short period of time. The crew worked late and on Saturdays to adjust to weather concerns.

It was a really big job. They finished on time and there were no extra charges. He is on the job every day. There are a few subs, but it is mostly his employees. I can't say enough good things about him! I would hire him again if I have any future remodeling done.

Description of Work
He did a major renovation: family room, kitchen, den, in-suite addition with it's own bathroom, master bedroom and bath, hallways, front patio, 2 porches, walkway, and entry ways.

The Washington area’s premier interior/exterior, painting and decorating company for both Residential and Commercial properties. We provide painting services, color consultations, wallpaper removal and installation, drywall repair and installation, gutter and window cleaning and many other services. And here is what we promise to you: Total Focus on Your Project Until Completion Full-Time Professional Work Crews Easy-To-Reach Point of Contact Phone Calls & Emails Returned Promptly  …

Work with you to bring your visions to life. Living Colors Kitchen&Bath is a family owned and operated business specializing in Kitchen and Bath Remodeling. With more than 25 years of experience, we are serving Northern Virginia, Maryland and Washington DC. We are a licensed, insured, and bonded company that goes the distance to provide quality workmanship you can count on.  …

Kader Construction Builders LLC is currently rated 5 overall out of 5.

No, Kader Construction Builders LLC does not offer eco-friendly accreditations.

No, Kader Construction Builders LLC does not offer a senior discount.