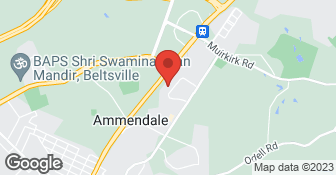 Central Exteriors has been helping homeowners in Maryland and Washington, DC repair and remodel their homes since 1956. Central Exteriors professional team of designers and installers will work with you to improve and enhance your home with top-quality products that will look beautiful and last for years to come. We maintain our excellent reputation through ongoing training and involvement in the remodeling industry. Bill Greenberg, President, is a member of the Professional Roofing Advisory Committee (PRAC) and was the 1991 president of the National Association of the Remodeling Industry (NARI). He and several other members of our staff are NARI-Certified Remodelers - a certification that gives special recognition to remodeling contractors who demonstrate a high level of competence and ethical standards. We are recognized by the CertainTeed Corporation as being quality master shingle installers. You can be confident that we will put years of experience to work for you...to transform your house into a home of comfort and beauty. Additional contacts names - Terry Greenberg. Financing available - inquire for info. Feel free to email us directly at info@centralexteriors.com.

Also rated A+ by the BBB, we offer highly energy-efficient, quality windows, at prices usually available only to builders and contractors. Prices start as low as $238, including installation! Some of our models are 3X more energy saving than ENERGY STAR requirements. Call for a free in-home quote and experience our hassle-free shopping experience with simple, transparent pricing displayed right in our ads, online or quoted over the phone. Or better yet, come visit our 10,000+ SF warehouse showroom where you can see all of our products and operation firsthand. Either way, we know your time is valuable, so we'll keep it simple-- no long sales presentations, no phony Buy One Get One FREE offers, trade-ins or other gimmicks.

***CURRENTLY, WE ARE ONLY TAKING ON NEW INSTALLATION/REPLACEMENT jobs. We aren't doing small repair jobs. Whiting Co has been serving the Baltimore and Washington areas for 41 years. When you work with Whiting Co, you work with highly experienced professionals who have worked with the company for over 25 years. If inquiring about work through Quick Connect program, please include a phone number to contact you. Award winning. Additional DBA - The Whiting Company. Additional website - www.whitingcompany.com . Additional phone: 301-218-5400

My initial review of this company was very poor. Our order was delayed several times, and every time I phoned, asking to speak to a manager, I was referred back to my salesman. To Quality Window and Door's credit, my initial review prompted a visit by the owner of the company, Nick, who wanted to get some bearings as to what went wrong with my order. Nick impressed upon me that he wanted to make t...

DESCRIPTION OF WORK
Replacement of screen doors with storm doors

DESCRIPTION OF WORK
Two days after posting my initial review, I got a visit at my home from Nick Neidig, who owns/runs the company. To his credit, Nick wanted to get the full details on how my bad experience with Quality Window and Door happened, and what he could do to assure that it won't happen to any of his future customers again. Nick assured me that he is very passionate about his company, and that he is also, in fact, very compassionate toward his customers. Nick told me that he had been unaware of the ordeals associated with my order, and, upon reading my review, he sincerely wanted to see how he could make things right for me so that I won't have that icky feeling every time I go in or out one of my new storm doors. Today's visit did quite a bit to make me think that maybe I was just a very unlucky aberration, and not a statistical norm, for his customers. I explained to Nick how frustrated it made me when, upon experiencing lengthy delays on my order, despite having put out thousands of dollars in advance, the only way I ever received any updates, from his company, was when I initiated the contact myself: Three or four weeks would go by at a time with no word from Quality Window and Door until, with pent up frustration, I'd contact the office on my own to find out if they even remembered me! My frustrations would be further exasperated when, in contacting the company directly, I always felt like I was being given a runaround by those who answered the phones, because their responses often seemed quite curt or flippant to me -- telling me that my only recourse was to speak to the salesperson who initiated my order. My thoughts were always, "Salesperson? Why on earth would I want to speak with the salesperson again, when my order is clearly in the hands of management now?" I was under the impression that the salesperson's work was finished as far as I was concerned, and he did a good job, because he "sold" me on the company. What I didn't know (because no one at Quality Window and Door ever told me) was that the traditional role of "salesperson" doesn't really exist within their company. At most home improvement companies, the role of the salesperson begins and ends with getting the product sold. Once money goes out, the salesperson's role is finished, and the consumer is in the hands of management from then on. This was our experience through every home improvement company we contracted, and we've contracted dozens. Nick explained to me that, at Quality Window and Door, none of the employees have titles. Even Nick's own business card only lists his name and contact info; it doesn't include a title like owner, president, manager, etc. Nick explained to me that the sales reps at Quality Window and Door are considered "business partners," and, as such, they themselves have all the managerial responsibilities that are usually dispersed to other employees in most other companies. In my months-long encounters with Quality Window and Door no one ever told me that until Nick did during his visit. While I understood that this is a very intriguing business model, I also conveyed my concern that, when things go wrong (because things often go wrong) customers need to be made aware of this distinctive difference by which his company functions. This is because, in my case, every time I was told that I had to speak to my salesperson, by the people answering the phones at Quality Window and Door, I was under the impression that my "little contract" didn't warrant management's attention. I was consistently being given the impression that I was being "kicked back down" to the level of the sales rep, because, at most other companies, that's exactly what they'd have been doing. Clearly, in my case, there were multiple levels of communication breakdowns -- beginning with breakdowns between my contractor, who will perform the installation, and my salesperson (of whom I am personally very fond) and leading all the way up to my personal dealings with those who answer the phones at Quality Window and Door. Any reasonable person can understand how such things can happen in a very busy world going through a global pandemic, and I can honestly say that I genuinely liked every person whom I encountered at Quality Window and Door even if the results of those interactions left me frustrated. Nick said that he would speak to all of his associates involved with my order, and he would get back to me after he did. I assured him that, based on our chat, I would update my review, and that, after hearing from him again, there's a good chance that we could salvage my feelings altogether regarding my overall experience. I will update this review again as soon as that all comes to fruition. Useful Funny Cool

I ordered the windows and bi fold door (total cost $48K) on July 18th , the sales person (Christian ) said you will get all in 3-4 weeks. i am the developer, i started to project then time came up for install the windows, i called the office they said you will get it sooner, i gave them a time like couple days for figure out. then they said: your order is back order till no eta. i was in shock bec...

We are saddened by our customer’s review of us when circumstances are outside of our control. Quality Window & Door is not a manufacturer. We are a window & door dealer. Like any other dealer, we don’t control the manufacturing process or any other issue that could cause them delays. We also don’t respond to customer threats prior to shipment about delays. Our sign off document clearly states this...
1.0

We wanted to purchase a European-style, timber-aluminum front door, and have it installed. The owner, Nick, came to our house for an estimate. Nick took the measurements, showed us brochures, and was generally friendly, knowledgeable, and helpful. This is the part that makes the rest of the story so mind-boggling. He promised to get in touch with a quote. This took quite a while - weeks and weeks....

We had used Quality Window and Door when we built a second home  several years ago, and we ultimately decided to select them for a whole-house window replacement job earlier this year.  We wanted high-quality windows, and had been very dissatisfied with the responsiveness and pricing of the Andersen Windows folks.  Quality Window (Howard Baker) was very responsive and worked well with us, helping ...

DESCRIPTION OF WORK
Supplied and installed replacement windows throughout our home.