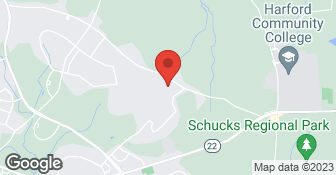 Provider was punctual, professional and completed the work as promised. Very professiional job.

Description of Work
Shower leaking through the wall and extrensive damage to the dining room ceiling below caused rebuilding of the bathroom shower and refurbishing/repainting the ceiling below.

He never came back.

Description of Work
While he came to the house quickly to review our requested repairs said he could do the work and give us an estimate, he never provided an estimate or returned our calls asking for the same.

Description of Work
I used A Finer Touch for drywall.

They took over for a fired contractor. They started right away and John was there every day with subcontractors (plumber and electrician). They were always on time and did a great job. The subcontractors were great. All the problems were solved.

Description of Work
A Finer Touch did an addition to our house (rear, where the deck was) that was approximately 400 square feet including a 1/2 bath and great room. It is 4 seasons with heat, electric, and air conditioning.

John Wandemberg is a talented and skillful carpenter. He did a great job, has talented and thoughtful people working with him. They think about the work they are doing and provide helpful suggestions on how a project can be done better, more cast effectively and give greater satisfaction to the home owner in the long run.

See above. He is thee best contractor I have ever had the pleasure of using. I've thanked my friend 10 times for referring him to me.

Description of Work
Over the years, my deck had dropped approximately 3/4 of an inch. When this happened, it pulled the vinyl siding down just enough that when it rained, all the water ran down into my basement wall. My wall, my carpet, and all my woodwork on the inside was ruined. I called Mr John Wandemberg at A Finer Touch Inc, as he was referred to me by a friend, as he was known for his excellent work. John came out, told me what needed to be done, how much it was going to cost, and I hired him for the job. John had the deck jacked back up 3/4 an inch, fixed the siding, put the needed flashing behind it to make sure it wouldn't leak again, sealed it up, reinforced the deck, and that part was done. He also finished & waterproofed the whole deck, replacing needed boards, and removing nails that kept popping up with screws that won't pop up. He then ripped out my whole wall where all the damage was done from the water, replaced all the bad wood, insulation, and drywall. He then painted my whole basement, put beautiful molding around my slider in the basement that had never been there before, and now my man cave/basement looks better then it has in the 16 years I've lived here. He then went out to my deck again, and put supports in the middle of my staircase leading from the deck to down in the yard. This prevented my stairs from shaking while walking down them, and basically stabilized the whole deck staircase. After all this work was done, he installed an Andersen slider that leads from my living room to my deck. What was amazing about all this work he did for me was that he did most of it (when he didn't have a helper) by himself with a severely injured foot that he injured just before he started my job, which required him to have surgery to put PINS in his shattered heal. This man works harder on crutches and hopping around on one foot then most people do on two legs. While putting in the slider, he noticed how bad the flashing was around it, and not only did he seal it properly, he built a new casing around it to prevent further damage, and sealed the whole door with foam insulation. He also used plastic wood on the sides and base, so as to prevent anymore wood damage in the future. I've already noticed my home is staying cooler longer, and my energy bills are going to reflect it. After all this work he's done, we've received lots of rain with storms and nary a drop of water anywhere in the basement or anywhere he did work. One thing I did notice while John was doing all this work was that he was a perfectionist. Numerous times he would check over the work that his helper was doing, and if it wasn't to his liking, he made him do it over again until it was.

When the unexpected happens you want a professional on your team—one who analyzes and fixes the problems quickly in an efficient and cost-effective manner. Turn to AllPro Fire and Water Restoration. As an industry leader, family-owned AllPro has been restoring homes and businesses to their original condition for nearly a decade. With a goal of providing efficient, reliable work on time and on budget, AllPro Fire & Water Restoration has helped thousands of homeowners and businesses in the Baltimore metropolitan region recover from minor and major events. Our expert crews cover New Castle County in Delaware, Cecil County, Harford County, Baltimore County, Baltimore City MD, Carroll County and other surrounding counties in Maryland. Call us and discover why AllPro is the first step to take when the unexpected happens. Call the Certified Professionals at AllPro today!  …

The Cabinet Restoration Company is your cabinetry expert specializing in the restoration of kitchen cabinetry. It is our commitment to provide the highest level of customer service and quality to our clientele. Our highly skilled staff of craftsman have over 22 years of experience each and use only the highest quality solid wood products. This allows us to provide our customers with results that are guaranteed to be beautiful, durable, and affordable. "Our job is not done until you are completely satisfied!" The Cabinet Restoration Company can balance budget and artistry to meet your individual needs.  …

How is A Finer Touch Inc overall rated?

A Finer Touch Inc is currently rated 4.9 overall out of 5.

What days are A Finer Touch Inc open?

A Finer Touch Inc is open:

What payment options does A Finer Touch Inc provide

No, A Finer Touch Inc does not offer eco-friendly accreditations.

Does A Finer Touch Inc offer a senior discount?

No, A Finer Touch Inc does not offer a senior discount.

Are warranties offered by A Finer Touch Inc?

What services does A Finer Touch Inc offer?

Are there any services A Finer Touch Inc does not offer?