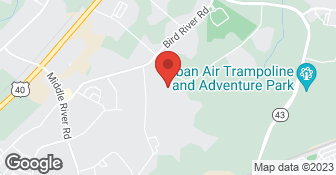 WE ACCEPT CASH, CHECKS AND ALL MAJOR CREDIT CARDS....

We are a home improvement company that specializes in doors windows and roofing. I am a working owner that completes jobs regularly as well as my highly skilled craftsmen crews. With over 20 years of experience you can count on us to treat you home like it was one of our own.  …

Freedom Fence and Deck specializes in affordable top quality maintenance free decks and fences. We are an owner operated company with zero complaints. We also have earned a A+ rating with the Better Business Bureau. We offer a limited Lifetime Warranty on all our work. Angie's List has awarded us the Super Service Award three years in a row.  …

Not well. Nightmare. He walked out on us and pulled the two workers off the job when he was asked to secure the block walls, they put nothing in to prevent the blocks from moving or falling. He was asked to replace 8 boards on the deck. The boards were marked. He sanded the marks off !!! He didn't want to replace them when he said that he would. After getting the two payments of $2500.00 totaling $5,000.00, he told us that he was not going to replace ones that had "little" cracks. The boards popping up he said that he would sand them down. When we signed his "contract" he promised he would replace any deteriorated wood on the deck. In one text he said that he would belt sand the ones that were popping up! We wanted them replaced, even gave him another 200.00. We tried to be nice to him and just picked out 8 boards, anyone else could have had him replace more. He wanted the last payment of $2500.00 even before finishing the job! And when we told him that he had to secure the block wall, replace two boards and put proper drainage behind the walls he said that he was not doing that and walked off, sending a text to me saying see you in court and a text to my girlfriend saying something about karma getting her I have recorded on my phone the outcome of that. 2 months and nothing complete, we had to call in a landscaper and a painter now to finish. Plus, the drainage on the small wall, was put in wrong! the deck work is terrible, see photos. Then when he started the steps, he said that for the steps, he was grading the dirt "like a little"hill" " and putting pavers every few inches up the hill instead of steps. The two workers never built a wall before!! So we finally got him to build us steps, but neither he nor his two workers knew how to. After finally realizing that he didn't know what he was doing, and 3 weeks into the job that he said would take 2 weeks, ( turned into 2 months and nothing is finished and what was done is falling apart) the workers told us that they had just met Mr. Sala. One through her boss who just met him and started dating him (she had a full time job, so she couldn't come everyday), and the other worker was the boss'snephew. Neither had known him for more than a few weeks and this was their first job. Mr. Sala left them unsupervised. And although we appreciated their hard work, I would say that in 6 weeks time, they weren't even here working for 40 hrs total. So many problems, he fought us on anything and everything, he showed up only a few times, he would text us who to give the cash to. He requested extra cash because he had not enough money to buy the 6 x 6's for the steps that they ended up using. So gave him $250 cash. He told us that 6 x 6's are hard to find so he had to order them. I looked up online and Home Depot and Lowes both carry them. I asked for a receipt and he thought of every excuse. The first one was that he buys with one of his two "big" construction accounts so he used the money to pay on his account , he produced something off of his computer after I told him that everyone gets a receipt for purchases. That was one of the other excuses. Lost power in workshop because he didn't call Ms Utility. Didn't even bother to make anything right, went straight to trying to sue us for the balance when nothing is even finished.. Now when I look his "company" up, I see he has no reviews, in business only 4 years and number of employees "1" I really, really wish that I would not have just accepted his saying that he was on Angie's list, believing their commercials, thinking he must be good or he wouldn't be on it. Photos of texts show, if read completely, how he could not make a decision on anything. He knew I worked but texted constantly with his indecisiveness. He borrowed our miter saw and never cleaned it up or empty out the sawdust. He would act nice and ask how we were and then go into how sore he was from lifting things, his weight loss, girlfriend, etc when all we wanted was someone who knew what we wanted done. He was always late, his two workers said, because "he likes to sleep in". But the nerve of him asking for the final payout of $2500. when the deck wasn't even close to being done and fence was not finished with improper drainage, was unbelievable ! And the extra cash he asked for, he said some of it paid his one worker and that he really appreciated her. In other words, we should appreciate her too and not question his using the money for the job on her. He is the worst contractor yet by far.

Description of Work
Minor deck repair to our 12 x 19 ft deck . To include replacing 8 boards, strengthen railing and replace tops of railing. Stain deck and fence in courtyard. Power wash both prior to staining. Replace old landscape wood steps with new wooden steps. Landscape small court on each side of steps and build retaining wall on each side, 30 inches high. Installing French drain behind each wall, inside base, to wick water away keeping the integrity of the structure. Secure block walls by gluing each course.. Cost $7,500.00.