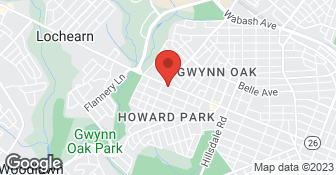 From 2009, Ahmed Construction LLC has been providing their outstanding home remodeling and construction services in Virginia, Maryland and Washington, DC. We specialize in deck construction, patio building, window replacement, roofing, siding replacement, sun rooms, painting, kitchen remodeling, bathrooms, basement remodeling, additions, and even full-on construction. We combine quality old-world craftsmanship with the latest sustainable building practices to provide you with an unmatched home restoration experience. Other Baltimore home renovation specialists subcontract their work. We take the pride in performing all work in house. Our team of designers and craftsmen personally guide every project from start to finish. It’s this attention to detail and passion for perfection that sets us apart from other home remodellers in Maryland, Virginia and Washington, DC. We welcome the opportunity to work with you on your next custom remodeling project....

The contractor was great to work with in the beginning. He wanted to start as soon as I signed the contract in Oct-2014, but I didn't have the initial 1st draw yet (I provided it by mid Dec-2014). Up through the 2nd draw ($32,800.00) in Feb-2015, all seemed to be going well, even though there were some delays. But by Jun-2015 communication from him was not as timely as before (meaning, he wasn't responding right away for updates), and not much progress was being made (demo done, some framing up, plumbing pipes weren't complete, electrical work not complete, no windows). By July-2015, I was able to catch up with him at the property, and that is when I was informed that he had been struggling with resolving the plumbing issues (after about 4 weeks or so). I expressed that this project is taking too long, and we need to move forward. I expressed that he can't keep me out of the loop, and that if I have to provide additional funding to resolve the issue, then I would have to do that. He was trying to stay within budget. But, at this point, I needed the project completed. He agreed to work through the problem, and keep me in the loop. From that point on, it was a struggle to get information from him as to the status of the project. I have met with him on 9-Nov-15 and explained my frustration with him, and close to reporting complaints of him via BBB and other channels. We agreed he would report weekly to me, and he provided a timeline for things to happen. He stated he didn?t need any more money until the job is done. By early Jan-2016, nothing much else was happening to the property, and he still doesn?t communicate with me weekly. We met on 18-Jan-2016 to discuss my frustrations again, go over what needed to be done, and because of the plumber?s extra work to get the plumbing cleared and set up, along with buying doors, windows and a furnace, he needed $10,000.00 from the 3rd draw (but this included an extra $4,000 of extra plumbing work). I provided him the money, because I wanted the work done. As of 29-Feb-16, I haven?t seen much work done, other than the furnace brought in. He hasn?t responded to me since 15-Feb. And he hasn?t responded to my 25-February request for update.

Here at Brothers Waterproofing, we provide foundation services such as waterproofing, structural repair, crawlspace encapsulation, piers, sump pump replacement, sub floor drain system, concrete work, and air ventilation systems. Founder John Enciu, has been in the industry for over 15 years. He has put together a team with over 50+ years of combined experience, that can strategically and effectively protect your BIGGEST investment, YOUR HOME. We offer FREE ESTIMATES, FHA/VA Certifications, and a NO PRESSURE approach! A TRANSFERABLE OWNERSHIP WARRANTY and a NO QUESTIONS ASKED service policy. We are committed to EXCELLENCE and HONESTY! CALL US NOW and see how we can help you. (888)362-4884  …

Budget Waterproofing has more than 55 years of experience in servicing commercial and residential customers throughout Maryland. Our Maryland waterproofing services range from foundation crack repair to sump pump installation and crawlspace encapsulation. If you have moisture, humidity or mold problems in your basement, Budget Waterproofing is your solution. We have proven over the years that our waterproofing methods not only look good and do the job, but also last. Our technicians are well-trained and instructed to respect your home and make sure you are happy with their job. As one of the leading basement waterproofing companies in Maryland, we are confident that you will will be satisfied with our level of quality. Enjoy competitive pricing and state-of-the-art waterproofing – hundreds of satisfied homeowners already are!  …

Ahmed Construction LLC is currently rated 2 overall out of 5.

Are there any services Ahmed Construction LLC does not offer?