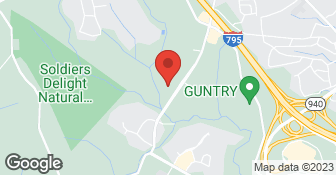 The project was not completed and Frank Davis left the job site early with work unfinished. I would avoid this contractor for residential and commercial projects as much as possible. He took the down payment did the simplest work they could (very poorly at that) and left the major job (deck door repair) unfinished and untouched. Frank Davis was your typical yes man contractor. He talked a big game and showed up only a little bit late every day. The entire project was scheduled to take 3 days, however the spigot was to take an hour and a half and after three days, he had introduced a leak into the home that was not previously there. The sink repair was extra-ordinarily ugly and poor. He had to spend a second day redoing it only for it to look just as bad. During this process, they managed to get paint on the tiles in the bathroom too. The trim on the window repair looks like it was done by a toddler with play dough. Frank chooses to use liquid nails, calk, and putty as much as possible. This is because it is quicker and cheaper this way than to do it right and make it look nice. Further more, when facing even just a finishing nail, they leave it hanging out of the wall at least a quarter inch to ensure some damage to your body if you accidentally snagged it. I guess this is why they prefer adhesives and caulk.

Frank Davis contractor was a real gentleman. He tried his best to get work done and house secure in a timely manor. Gave great suggestions and even made my house more beautiful than it was before.

***CURRENTLY, WE ARE ONLY TAKING ON NEW INSTALLATION/REPLACEMENT jobs. We aren't doing small repair jobs. Whiting Co has been serving the Baltimore and Washington areas for 41 years. When you work with Whiting Co, you work with highly experienced professionals who have worked with the company for over 25 years. If inquiring about work through Quick Connect program, please include a phone number to contact you. Award winning. Additional DBA - The Whiting Company. Additional website - www.whitingcompany.com . Additional phone: 301-218-5400  …

We are a company with more than 10 of experience in the construction industry. We provide a quality work to all our clients.  …

How is A & F Construction Services overall rated?

A & F Construction Services is currently rated 3 overall out of 5.

What days are A & F Construction Services open?

A & F Construction Services is open:

What payment options does A & F Construction Services provide

Does A & F Construction Services offer a senior discount?

No, A & F Construction Services does not offer a senior discount.

Are warranties offered by A & F Construction Services?

No, A & F Construction Services does not offer warranties.

What services does A & F Construction Services offer?