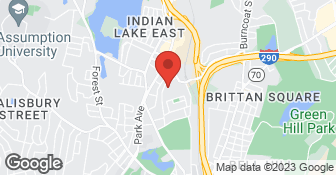 We contacted a couple of companies to get our terrible old garage doors replaced as well as install new openers. Raynor came through with the best price and also was the most prompt in replying to questions and emails. The scheduled an appointment, arrived on time, and the installation went flawlessly along with a great cleanup job. The new garage doors are fantastic and we actually feel a difference in temperature on the floor above the garage due to the R-value of the doors (as opposed to our old ones which had an R-value of probably 0). Here's the best part though...when we originally got the estimate, it included the installation of two backup batteries. However, when we received the final contract to sign, I did not notice the accidental omission of the batteries when we signed it (my fault). Once the installation was completed, I finally noticed my mistake, and even though I had signed the contract without the batteries, Raynor came through and stood by the initial estimate without any hesitation (since they realized the mistake on their part for not including it in the final contract). I have great respect for them for honoring the initial estimate even though the signed contract did not have the batteries on it, and for that, I would highly recommend them for any garage door job.

They were awesome. They gave me a highly competitive quote right on the spot and did not ask for any money down. The doors came in a week later and they were promptly installed with zero hassles. Great product-- solid, attractive, and quiet. They make my house look like new house.

We got a quote from them at the end of May. They scheduled an appointment to install the doors, then cancelled at the last minute. Two months later, we decided to go with someone else to install the doors. My husband is a nice guy, and would say we are in no rush, but I believe they took advantage of that - two months is way too long. So, when I called to cancel and tell them we went with someone else, they decided to try to bully us into going with them. They told us we signed a contract, and the doors are custom made. I told them we ordered the standard door, and she claimed that the size we ordered was custom - it was smaller. When I checked with the person who will be installing our doors, he told me that is not true - they are a standard 9' x6'x6' door - and he has them in stock - no special order needed. So, Raynor lied and tried to bully us into still going with them - not very professional!

I sent an inquiry to Raynor for have my door replaced. It was scheduled for 3/26/15 between 0800-0830. When I didnt hear or see from the representative I called to check on the scheduled time encase I had it incorrect. The first person I spoke with was very pleasant and helpful and politely put me on hold while she investigated the issue. About thirty seconds later a different woman picked up and was immediately abrasive. I think I dealt with her a week prior when I missed one of their phone calls, when I returned it not knowing who had called since no message was left, she sounded annoyed and answered "hello?" Perhaps stating the company name and your name would help. Anyway, on this occasion she rudely told me the representative showed up, took measurements and left, stating that no one was home when he tried to make contact. Mind you depending when he showed up in that half hour window there was at least one, possibly two cars in the driveway and I was on the couch about 10 feet from my front door. Turns out my garage door needs carpentry work before I can have the door replaced, which is fine, but I still would have liked to sit down with the rep. to see what my options were for doors once I get the required work done. After this experience I wont need that info from this company though.

Description of Work
Came out for a quote.

Description of Work
He replaced the spring on the garage door.

Call was answered promptly and professionally. Got the estimates on phone. Prices are good. Got the appointment for the same day. Had to cancel the appointment as the other guy gave me an earlier time.

Description of Work
Gave me estimates for the replacements of four springs on two garage doors.

Salesperson came to me (40 miles from their office). He was very helpful and patient as we worked through the details (color, windows, style). The price was good and the installation went well. Afterwards when I messed up some of the weatherstrip (totally my fault) the salesperson dropped off a free replacement. Top-notch from beginning to end.

I had called for estimates from 3 different companies. One failed to show on the date that we agreed to and called 3 days later to apologize and reschedule. Thanks but NO thanks! Bob from Raynor was great! He spoke to me in terms that I could understand and they were a couple of hundred dollars less than the other company. I would recomend Raynor door to everyone!

Description of Work
I had two brand new garage doors installed and instead of replacing the old garage door openers, Raynor offered to fix the ones that were already there saving me an additional $400.00+

Prompt service. One person installed new door and took old door. We've had no issues since the installation.

They were nice and helpful.

Description of Work
We contacted them with a question about a product to replace a piece of our garage door. They were kind and responsive. While they didn't have the product we needed, they were able to direct us to an online resource to get what we needed.

The only issue that I had was the tortion spring took about a month to come in after they ordered it, and I had to contact them to find out what was taking so long. I think they should have contacted me with an update after the 2 weeks, when it was supposed to come in.Other than that I am satisfied with the service and would use them again.

Description of Work
Tortion Spring on wide garage door temporarily repaired on first visit (until ordered part came in), then replaced on 2nd visit.The serviceman that came out was very knowledgable and did a great job.

Bob was very punctual and showed up right on time for the appointment. I wanted an estimate for a garage door opener but I knew it could be difficult because my door's track appeared to be too close to the ceiling. I had just met with another garage door company before him and they told me I would need a new garage door and I would have to lower the height of my door's opening. This was okay with me so I asked Bob for an estimate. He was very professional and took all the required measurements. He made some good suggestions, including using manufactured "wood" to lower my door's height because it was a better product and would last longer. The next day he promptly e-mailed me with an estimate for a new garage door and opener for $1,895.00. (My door is double-wide) This was a bit more than I was willing to spend so I contacted another company for another quote. The new guy said he could alter my current door to make it smaller so a total replacement wasn't necessary. I was disappointed that Bob didn't suggest this first because he seemed like a knowledgeable guy to work with.

Description of Work
I received an estimate for a new garage door and opener.

As far as I can tell it was fine. The only thing that could have done better is that they could have explained what they did. It was broken and they fixed it but I have no idea what they did to fix it so that would be nice.

Description of Work
Raynor Overhead Door did a repair for me.

They were great. They were on time and did what they said they were going to do. The guy who came out cleaned up after the work was done. The price that they charged wasn’t the cheapest or the most expensive one compared to the companies that I looked at. It was in the middle. The quality of their work was excellent and so was their responsiveness. I would definitely use their services in the future too.

Description of Work
I used the services of Raynor Overhead Door in April for installing two garage doors.

Everything worked perfectly after the repair.

Description of Work
The repairman fixed the garage door - adding weight to the topmost door panel to compensate for the newly installed springs.

I am very pleased with the work done by Raynor Overhead Door. I am pretty happy with the garage doors. It was a tricky job, because there were space limitations. The technician that installed the doors was creative and resourceful during the installation process. It wasn't an easy installation for the installer.

We sell and repair all makes and models of garage doors and garage door openers. We are a 3rd generation family owned and operated company that started in 1953. Owner on every job!  …

RAYNOR OVERHEAD DOOR is currently rated 4.7 overall out of 5.

No, RAYNOR OVERHEAD DOOR does not offer a senior discount.

Are there any services RAYNOR OVERHEAD DOOR does not offer?