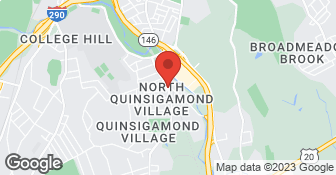 We have had Reliable successfully repair and service our old Maytag washer and dryer for 20 years. This time someone new to us. He came, took $300 as "deposit" for an intensive service and repair scheduled for the end of the week. Check was cashed immediately and we have heard nothing since including no response to multiple phone calls and messages left. This was a month ago. We have been robbed. I have reported them to the Better Business Bureau and am seeking further action. Sadly UNRELIABLE Maytag now. Avoid them!

Very profession. Brought a person who specializes in older heating and stove units. Took our an old part and repaired it. Brought the part back in a few days and reinstalled part. Also as a last minute request agreed to squeeze time to install a new microwave that we had purchased. All was done efficiently and timely. Person in office was pleasant and helpful in returning calls and scheduling time.

We've been using these people for over 15 years and have had consistently excellent service and prices. Most importantly, when an appliance is broken they get here quickly and show up when they say they will. Cost of repairs has always been reasonable with no last minute “surprises” in the price. When an appliance needs to be replaced, they have a huge inventory and if they don’t have it in stock they can find it and get it to you in a day or 2. We recently had a good experience with them locating a refrigerator that fit into a very small space. I couldn’t find one anywhere, but they located one and had it installed in a couple of days. I highly recommend them.

Description of Work
Checked dryer after issues with clothes not drying, just getting hot. Diagnosed issue to be poor venting and they provided recommendations.

They did a great job. It was logistically complicated, to get the washer and dryer into a space that connected to the plumbing, the electricity, and the dryer vent. The previous plumber just plopped them down, didn't stack them, and left. These guys put all their ingenuity into getting them exactly how I wanted them. And Jose was amazing, somehow getting in and out of the corners to position the appliances. Worth every penny!

Description of Work
Stacked and installed a washer and dryer.

They were trying to fix what the other guy broke (who I hired while they were on vacation), there's still a thermostat they can't find. And I said as long as we have it by the fall before they have to turn the heat on that's fine. They are prompt, they are, the technician is very good. When you talk to them on the phone they are kind. Their billing is usually accurate. I say usually, I see so many bills coming across my desk, I know I'm saying in general but they've been, I can't remember calling and saying, and quot;Hey, you said it was going to be this much and it's that muchand quot; - so they're accurate with that. When they sell me something it's the grade that it is when they say they are selling it to me. I've dealt with them for a few years.

The came out the same day, very professional. I had no problems with them.

Description of Work
My gas stove would not ignite. They came out and diagnosed the problem. They told me what parts I needed and I installed them.

Insured
All statements concerning insurance, licenses, and bonds are informational only, and are self-reported. Since insurance, licenses and bonds can expire and can be cancelled, homeowners should always check such information for themselves.To find more licensing information for your state, visit our Find Licensing Requirements page.
General Information
Free Estimates
No
Eco-Friendly Accreditations
No
Payment Options
Check, Discover, MasterCard, Visa
Senior Discount
10%
Warranties
No

How is A RELIABLE MAYTAG HOME APPLIANCE Co overall rated?

A RELIABLE MAYTAG HOME APPLIANCE Co is currently rated 4.3 overall out of 5.

What days are A RELIABLE MAYTAG HOME APPLIANCE Co open?

No, A RELIABLE MAYTAG HOME APPLIANCE Co does not offer free project estimates.

No, A RELIABLE MAYTAG HOME APPLIANCE Co does not offer eco-friendly accreditations.

No, A RELIABLE MAYTAG HOME APPLIANCE Co does not offer a senior discount.

Are warranties offered by A RELIABLE MAYTAG HOME APPLIANCE Co?

No, A RELIABLE MAYTAG HOME APPLIANCE Co does not offer warranties.

What services does A RELIABLE MAYTAG HOME APPLIANCE Co offer?