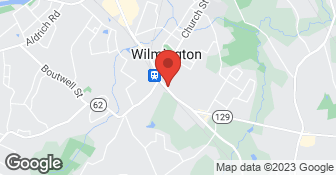 All Floorz is a full service flooring company. We offer environmentally safe products, professional services & reasonable prices. We look forward to seeing you!...

Dave was a pleasure to work with. He was very responsive and professional. Work was done very quickly and came out awesome! Would 100% use them again!

We contacted Dave for the initial quote (based on a refererral from a relative). He was very responsive and showed up on time to view the job and provide a quote. He even went out of his way to help us dispose of some insulation from a previous job. We had a tile in mind, but it was only available in one location locally. We brought the sample in to Dave and he was able to provide a tile that was very close in style and appearance. We scheduled the job for mid June and All Floorz showed up on time and began the work. The job took about 4 days. The person who came out every day did a nice job cleaning up when finished for the day. When the old tile was all ripped up, All Floorz poured thin layer of a self leveling compound over the existing sub floor. The tiles where then installed. The only issue we had (and we felt it was important) was that the floor is not level. It is out approximately 3/4" over an 8 foot span. When we discussed the issue with All Floorz, they said that they do not check the floor for level and that it had to be an existing condition. Since we were installing a pool table on top of the floor (which we mentioned during the intital quote process) we thought All Floorz would make sure the floor was level. Nothing was said about any issues with the sub floor during the entire process. End result: The tile floor looks nice as long as you don't look at the bottom of either of the sliding doors. There, anyone can easily see how out of level the floor really is. If you plan to use All Floorz, and you want the floor to be level, we would strongly recommend you get it in writing before they begin any work. Based on our experience, we would not recommend All Floorz.

Description of Work
Rip up and dispose of existing tile in sunroom, prep subfloor and install new tile.

David and his installers did a nice job. All of his workers were professional, knowledgeable, timely and polite. I am happy with my new kitchen floor and would not hesitate to use All Floorz for future projects.

Excellent folks to work with! Very professional, courteous, and highly skilled. Would highly recommend them (and have!).

This is the second time we purchased our hardwood floors from All Floorz. The owner Dave is a very polite and professional guy who gave us a great estimate. He was spot on with his estimated install date and the floors were installed in a couple of days. We are very happy with our new stairs and floors!

Description of Work
Installed Hardwood floors in the hallways and two flights of stairs.

The owner Dave was personable and accommodating with the estimate. I gave a deposit and scheduled work. He measured for the flooring, as well as the baseboard. The installer arrived the first day two hours late and then left early. The second day, the person waiting to let them into the house for me called at about 10:30 am to let me know the installer had not arrived. After I called and spoke with him personally, he finally headed over, arriving at about 12:30 pm. He still left early (approx. 3pm). On the third day, he again was late. When I arrived home, I found large pieces of baseboard not attached to the wall, multiple transition moldings not installed and baseboard not filled to meet the floor (If the floor is uneven, they need to fill the gap with a sealant). Turns out, noone ordered the transition moldings. And the reason they needed the third day was because the baseboard wasn't ordered until the job started. After taking pictures of all the issues and speaking with the owner, he was understanding and willing to fix it, but still needed the appropriate materials. This was a Friday and I had to wait until the following Thursday. Meanwhile, in a two bedroom condo, the contents of both bedrooms are packed into the living room and my husband and I were sleeping in the middle of the chaos. We could not move our furniture back in, because it was dismantled. What could have been a 1.5 day project, if they had everything they needed up front. It ended up taking almost 2 weeks.

We at J&J Flooring Inc are specialists in ceramics & natural stones for residential and commercial projects. We work with all of Schluter systems & electric radiant heat. We don't have an expensive showroom to maintain, so we are able to pass on significant savings to you, the customer. Owner operated, no subs. Cost is determined by the job. No travel charges. "Let us design your next bathroom!"  …

Marcio's Tile Design are specialists in residential and commercial ceramic, natural stones. Professional Flooring Service, Tile, Marble,Granite,Ceramic,Porcelain,VCT. Kitchen and Bathroom remodeling, ReCaulking, and Waterproofing of NEW and OLD TILE Installations. We do everything from Re-Grouts to Tile repair. Call (508) 314-7525 or Email (marcio.a.andre@hotmail.com) anytime for your Tile needs. Affordable price Owner Operated. 4 Employees. No Subs. Cost Is Determined By The Job. No Travel Charges. Alternate Phone: (508) 733-6772 Fax: (508) 314-7525  …

We're Dedicated to Giving You the Best of Flooring & Tile Services, with a Focus on Quality, Customer Service, and Competitive Prices. We delivery Quality In Every Square! + Competitive Prices + Expert Team + On-Time Job + Free Consultation + Quality We Will Take The Time To Make Sure You're 100% Happy.  …

Sales and/or installation of all types of flooring products including tile, hardwood, vinyl, carpet and laminates!!

How is ALL FLOORZ overall rated?

ALL FLOORZ is currently rated 4.2 overall out of 5.

What days are ALL FLOORZ open?

What payment options does ALL FLOORZ provide

Does ALL FLOORZ offer free estimates?

No, ALL FLOORZ does not offer free project estimates.

Does ALL FLOORZ offer eco-friendly accreditations?

Does ALL FLOORZ offer a senior discount?

No, ALL FLOORZ does not offer a senior discount.

Are warranties offered by ALL FLOORZ?

No, ALL FLOORZ does not offer warranties.

What services does ALL FLOORZ offer?

ALL FLOORZ offers the following services: Sales and/or installation of all types of flooring products including tile, hardwood, vinyl, carpet and laminates!!

Are there any services ALL FLOORZ does not offer?