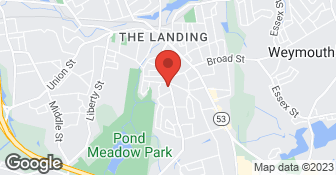 A residential general contractor, All-Pro Builders, Inc. is a family-owned and operated team in Weymouth, MA. Our experienced team travels to customers living anywhere on the South Shore, into Boston and towards the Cape, offering professional, custom home building services. Whether you want a new home built or a custom addition, we can transform your home to add style and functionality with endless options for renovations. Our many years in construction have earned us the expertise to work on projects of all sizes. We are dedicated to providing reliable service, quality craftsmanship, and superior customer service for the duration of your project....

In the spring of 2017 All-Pro performed an addition to my house. At the time of the project, I was very pleased with the work. Unfortunately, since then little things have cropped up, most specifically, there is a spot on one of the walls that appears to be water damage. This issue was brought to Brian's attention in October of 2018 (over 2 years ago). Eventually during the fall of 2020 Brian came out to investigate and indicated he would have someone take a look at it, which he did, but that investigation didn't show much. I was told the next step was Brian would be out “tomorrow”. Unfortunately, as I write this 4 months later tomorrow has not come, and at this point I don’t expect it to. My real complaint is not that an issue presented itself, because things happen. The disappointing thing is the lack of response and unfulfilled commitments by All-Pro. The number of times I experienced "we will be there tomorrow" or had an unresponded text, email, or phone call are well over 10. Needless to say, this experience during the last 2 years has caused me to revisit my experience with All-Pro Builders.

Description of Work
They performed an add-on to my house

All Pro was fantastic. The work was done in the time frame we discussed and the quality of the work was spot on. Each group of workers was respectful of our time and space, cleaned up after their day, and worked incredibly hard. This was by far the largest project we had ever undertaken as home owners and the team at All Pro was there with us every step of the way. The project came in on budget and there were zero surprises along the way - very transparent process from beginning to end which I appreciated. Also, Brian was accessible throughout the project for any and all questions along the way. I would highly recommend Brian Tanguy and his team at All Pro.

Description of Work
We added a mudroom and garage with second floor space to our existing home.

All-Pro was good to work with. Entire job took 4 months to complete. I wanted the job done, but really didnt have the budget for hardwood and top of the line finishes. Brian made it happen for a lot less than other others quoted. Not happy with some of the colors my wife picked out, but that's another story.

Description of Work
Add second floor on my home as well as addition on the rear for family room.

Brian and his team were great from start to finish. The quality of work was very high, all of his guys were great to have around, they kept to budget and there were no "surprises". Brian is an honest guy, very fair and keeps a cool head when others might be losing theirs.

I was very happy with the work that All-Pro did. I had been investigating opportunities with Brian for years and for whatever reason the other opportunities did not work out from our end. Still, the repeat encounters with Brian gave my wife comfort regarding his responsiveness and professionalism. With regard to the eventual project, it was substantial, both in terms of price/scope as well as the impact it had on the home since my wife and two small kids were still living in it. Still Brian's crew was incredible considerate of the existing space and also of their efforts on the new space. We are very happy with not only the selection we made to use All-Pro, but also the overall work. It is also worth mentioning that after the job was complete and the last check was delivered Brian has still been attentive to little things that have cropped up. For my wife and me, this is the most telling sign of his commitment to the customer.

Description of Work
Added a garage with living space above onto my existing garrison style colonial house.

The project went great. Mr. Tanguy was a pleasure to work with, and was always responsive to our needs and requests for last minute changes. The work went quickly, with sub-contractors scheduled without delays. The quality of the work was excellent. We would definitely recommend All Pro Builders

Description of Work
We had an addition (master bedroom, bathroom, walk-in closet) put on above our existing garage.

Time: We were given an estimate of 8 weeks for completion of this project. The project was completed in 6 months. At first I was quite impressed with how the job was progressing. The work crew came on very cold days and worked hard to build the frame. But once the frame was built, the problems and delays began. Windows: The first issue was that one of the windows ordered came in the wrong size. This delayed the project for three weeks. After the windows came in, they were did not match the windows in the existing house, which was one of our major requests. With the need for space and the project already delayed, we did not choose to fight with the contractor about this error because we did not want annoy him for fear of him further delaying the job. Danger in the yard: During the job, we found over 200 nails (we collected them and counted) all around our yard from the roof work. It was only after numerous requests for the contractor to come to clean up the nails that he came with the magnet. So much time had past that Brian, the owner of the business, pulled up rusty nails and actually told us that they must be from another job because they were so rusty. We were shocked that he didn't acknowledge how long he was taking to finish. Electric: Near the end of the project, we realized there were multiple errors with the electrical work. Some of these errors were minor, while others left us running up and down the basement stairs because the breakers were flipping every time we turned on a light. Brian called a different electrician to fix the problem, and in the course of "fixing" the problem, the light fixture we installed was broken. The electrician told us it was a faulty fixture, but so much time has past since we bought it that the store would not let us return it. Finishing: The closet door that was installed did not close. Brian came to fix it with a chisel and a hammer. He scraped out a rough hole in the latch, and left the door off it's proper alignment. Eventually the top of the door didn't even fit into the door frame. Holes were left in our walls for weeks. After we patched them ourselves, Brian showed up and wondered where the holes were. The floor team broke a light fixture while bringing the flooring into our home. The fixture was never replaced. The baseboard heating covers were missing pieces, and we had to call the plumber ourselves multiple times to have the pieces put in place. The wood used on the landing had/has big gouges and the support posts are not straight. It's not that noticeable, but better care would have prevented this. Communication: Brian's price was fair, and the overall work seems to be solid. But the poor communication about the windows and the responsiveness to problems was extremely disappointing. While some nails and a closet door not working don't seem like a big deal, the electric was serious and I attribute to Brian not paying attention to his subcontractor. I also am upset that Brian did not respond to the broken fixtures and other issues. In my head I can hear him saying, "Not a big deal." But when you are told that a project will take 8 weeks, and it takes 6 months, and when you spend a lot of money on a project, you'd like to enjoy your new purchase, and not have to worry about stepping on a nail or having a door jam when you try to close it.

Description of Work
Provider built an additional family room on our home.

With over 10 years of general contracting experience, Platinum Remodeling is your go-to team to help you from the roof to the ground inside and out. We are professional and here to help meet your needs and dreams come true.  …

Family owned and operated general construction and remodeling company serving the area since 2003.  …

Licensed
Insured
All statements concerning insurance, licenses, and bonds are informational only, and are self-reported. Since insurance, licenses and bonds can expire and can be cancelled, homeowners should always check such information for themselves.To find more licensing information for your state, visit our Find Licensing Requirements page.
General Information
Free Estimates
Yes
Eco-Friendly Accreditations
No
Payment Options
Check
Warranties
No

How is All-Pro Builders overall rated?

All-Pro Builders is currently rated 4.3 overall out of 5.

What days are All-Pro Builders open?

No, All-Pro Builders does not offer eco-friendly accreditations.

Are warranties offered by All-Pro Builders?

No, All-Pro Builders does not offer warranties.

What services does All-Pro Builders offer?